The market should dip into a pocket: the president wishes to cash the check

Trade wars will take second place – the markets will be focused on other events. We wait for a parade of the Central Banks and the next claims of Trump to the government.

Trump realizes himself by any methods though periodically loses the argument. The idea of duties became for Donald the key slogan similar to the phrase of Marcus Porcius Cato the Elder «Carthage has to be destroyed»: the idea of a trade duties war joins in any performance, the document or an event.

The current U.S. President managed by open threats to carry out that Obama didn't manage by diplomatic methods. Despite an agiotage around a «successful» meeting of Trump with Juncker becomes obvious that the head of the European Commission has obviously exceeded the authority. The task of the euro emissary was to offer the USA the program of reduction of duties for import of a car only, but it was only the occasion to start broad negotiations for Trump.

Donald very much was interested in trade deficiency of the USA with the EU and Juncker has promised a wider trade agreement that doesn't suit large European players at all, for example, France. The list of concessions of the EU rather extensive and many doesn't arrange, from the USA only revision of duties on steel and aluminum is announced. Nevertheless, the threat of an increase in the customs duties of the USA is temporarily postponed that gives to Europe chance for development of a more active position.

The growth of the American economy has accelerated up to 4.1% in the second quarter, having become the fastest since 2014 that allows Trump to declare success of the policy. The president has obviously deserved an award and has already shown the invoice to the U.S. Government in the form of threat of suspension of work because of resistance to decisive steps in migration policy. Wait for the development of the conflict.

Further, we will walk briefly on key points:

The meeting was standard, key points of the European policy are kept. Draghi worked well impossible again, despite obvious split inside the ECB: the general statement was optimistical, the block of questions-answers has shown that there are no prerequisites for change of forecasts for growth rates of economy and inflation, the question about reinvestments after the termination euroQE wasn't discussed this time as well, market expectations on increase in a rate in September 2019 have reached 57%. Failure decline of euro after the press conference is caused by exclusively technical positions of large players: ECB has found a method of influence on the markets by interventions during the meeting.

Another meeting with FRS:

The meeting is expected standard, officials will support a policy of an increase in interest rates for prevention of overheating of the economy, but the actual increase in a rate isn't planned. Will provide to the market the brief accompanying statement without the updated economic forecasts and Powell's press conference. The reaction of the market to the accompanying statement of FRS is improbable. Existence among the voting dissidents can become the main driver: if at least one member of FRS votes for an increase in a rate – the dollar will sharply rise, but such chance is insignificant.

Brexit continues to irritate the markets after last week in Brussels has passed the next ineffectual round of negotiations. According to the last opinion polls, the May`s policy is supported by only 30% of the British − record-breaking low level of credibility, moreover, the idea of an exit from the European Union already raises doubts.

The market continues to buy up a pound, despite lack of progress on Brexit and negative statistics waiting for BOE meeting on Thursday. Judging by economic data, there is no need for an increase in a rate, but at the moment it is already a question of trust to the government: chances of increase from 0,5% to 0,75% are nearly 100%. PMI of the industry will be published on Wednesday and will exert an influence on pound levels before BOE, and PMI of services on Friday can change a pound trend after the decision at a strong divergence with the forecast.

According to numerous insiders, BOJ is going significantly to correct the policy on 31 July: rumors concern reduction of the volume of purchases of shares of ETF, increase in a target concerning the profitability of 10-year state treasury bills of Japan and to decrease in the purposes on inflation. Analysts consider that BOJ has lost independence long ago and his decisions completely depend on the government of Prime Minister Abe who pursues export growth policy due to the devaluation of a rate of yen. The Central Bank actually monopolizes the national share and debt markets, and the same Trump can stop this process at the discussion of the bilateral trade agreement with Japan. We wait for final growth USD/JPY and a turn down in September.

China continues to devaluate yuan and it isn't visible the ends of this process, as well as the resumption of negotiations between the USA and Beijing on the trade though both parties declare determination to intensify the negotiation process. The Chinese state banks sell dollar against yuan through forward contracts to develop an unrestrained decline in the rate. Beijing has sharply increased injections in a financial system to support economy: last week the National bank of the People's Republic of China has given out the new credits of 502 billion yuans (73.4 billion dollars) on the security of papers by means of the mechanism of medium-term crediting. China will please with the PMI on the morning of Tuesday, Wednesday and Friday.

And there is a little more statistics:

The forthcoming NFP is an excellent chance to derate according to the index of the dollar and to fulfill an option barrier for euro in a zone 1.1500/10, but strong data for this purpose are necessary. PMI and ISM services will be published after NFP exit so it won't be indirect data for the preliminary analysis. A sharp decrease in a number of new workers is improbable at the current growth rate of the economy of the USA, the main reaction of the market completely depends on the growth of salaries and an indicator of unemployment of U3. It is necessary to trace data on inflation in the eurozone, assessment of growth rates of GDP and indicators of unemployment. We behave carefully, but we listen carefully. 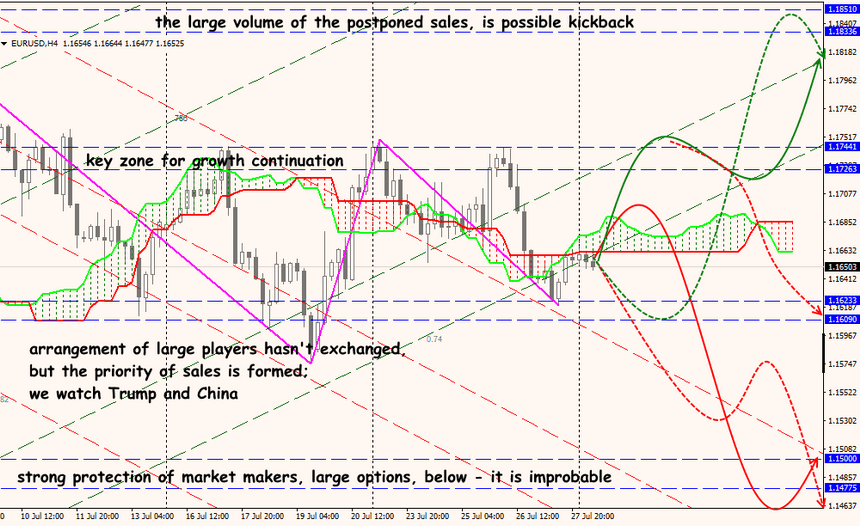 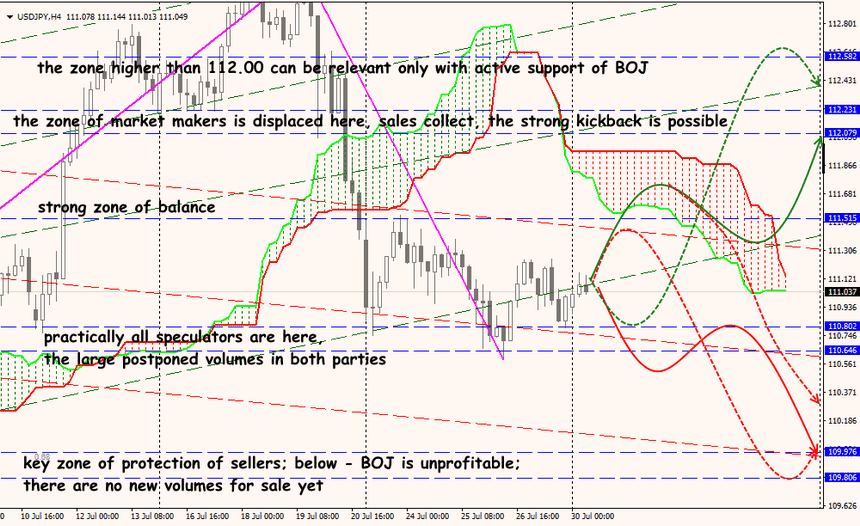