The market looks for the director, but all scenarios are negative so far

The ECB gave an optimistic surprise, but the markets did not appreciate it. May left, but the London fog is condensed. Trump postponed duties for Mexico. The world near the new currency wars and China looks for allies against the dollar again.

Waiting for mitigation of policy of FRS, decisions of the ECB lose in price, the reaction of euro obviously differed from Draghi's expectations. Planned resignation of the head of the ECB makes his guarantees on the preservation of soft policy of the ECB insignificant; the June meeting – the last exit of Mario to a scene, and any his successor will be less loyal to the markets.

The ECB approved a formulation about the preservation of rates up to the second half of the 2020th; details of the policy of TLTRO-3 disappointed medium-term speculators – issuance of credits at lower rates is possible, up to 0.10% higher than the deposit. The decision of the ECB in the matter is negative for Italy and Spain. Economic forecasts of the ECB were changed slightly. Till the decision of FRS, all insiders and the Draghi`s rhetorician will lead only to the short-term decline of the euro.

Euro figures actively declare determination to prolong Brexit terms to the middle of 2020 as believe that time can be necessary for the new Prime Minister for the second referendum. Indicators of the economy do not please, but the factor of Brexit leaves a chance for speculation. May will continue to fulfill the Prime Minister's duties until Tories decide on the successor: fight for a post of the party leader starts on June 13, but the main reaction of the pound is expected in a final tour. Johnson reaches the final at any deal, Gove and Hunt compete for the second place.

According to analysts, Johnson's arrival «will drop» pound more than for 2%, but panic sales are improbable. Anyway, the politician considering that «rigid» Brexit is better than the bad transaction will be the Prime Minister. However, with the current structure of Parliament it will be difficult to achieve real decisions, so new parliamentary elections the issue which is almost resolved.

The country cannot master the growing debt, the European Commission made the decision on the beginning of the disciplinary procedure, the penalty is estimated at €3.5 billion ($4 billion). On negotiations with the EU, the government has next «last» 20 days. There are two options: to post bail, in this case, the decision on the actual penalty can drag on for years, or refuse that can lead to cancellation of investments of the EU into Italy and also will block access to the benefits of the ECB. Pledge is more probable and then the problem is postponed, at least, until fall when the new structure of the European Commission starts working. The decision will probably be made on July 8.

The American topic develops towards the rapprochement of the policy of FRS and Trump's administration. However, the danger to combine trade wars with currency will allow Trump to use weakening of monetary policy only in the purposes and Powell with the ostentatious loyalty remains behind the scenes again.

New duties for the countries whose trade surplus with the USA is followed by a devaluation of the national currency, can become the law after June 27. The self-control of the markets will be lost, the correlation of assets − is fragmented that will aggravate problems of traders in any market and level of the capital.

Large players, strangely enough, expect on the positive scenario though all rhetoric of Trump tells the return. The President becomes more and more aggressive especially as his opponent Biden took an opposite position on China and trade wars in general. Prior to a G20 summit, the hope on peace Trump's negotiations with Xi Jinping and the head of European Commission Juncker remains.

The report appeared below forecasts that led to the decline of the dollar and the main correction is planned for the current week. Almost all components in minus, except record-breaking low unemployment rate (3.6%). It proves that a similar February failure was not an accident. Labor market slows down, but FRS considers that there are no reasons for panic − such dynamics quite correlates with the weak growth of key indicators of inflation. It ill be logical to sell the dollar on the ascending corrections till June 19.

Messages from the front:

The silence of members of FRS after NFP means that speakers take a break before a meeting on June 19 to understand results of negotiations of the USA-Mexico and also to receive some more important releases.

Draghi will have a chance to have an impact on the markets during the performance on Wednesday, information from meetings of the Eurogroup usually does not get to media, but insiders in comments are not excluded.

The Russian Federation suggests postponing the summit of OPEC to July 2-4 to consider the result of a meeting of Trump and Xi Jinping on a G20 summit on June 28-29. There is no reaction of cartel yet.

Statistics of the current week: regarding the USA – inflation of the prices of producers and customers; price index for import/export, retails, industrial production; regarding Eurozone − the index of confidence of investors of Sentix; inflation of the prices of consumers. Today Britain publishes the block of data (attention to GDP) and tomorrow − statistics of labor market. 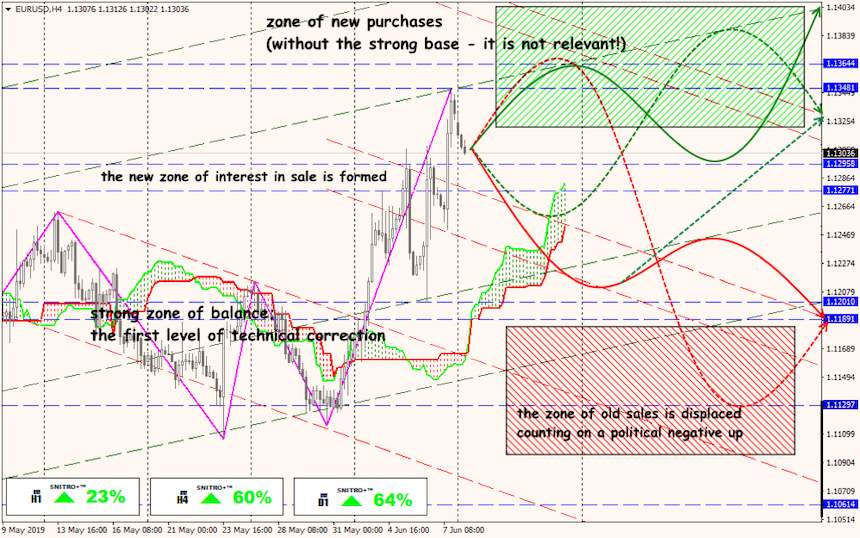 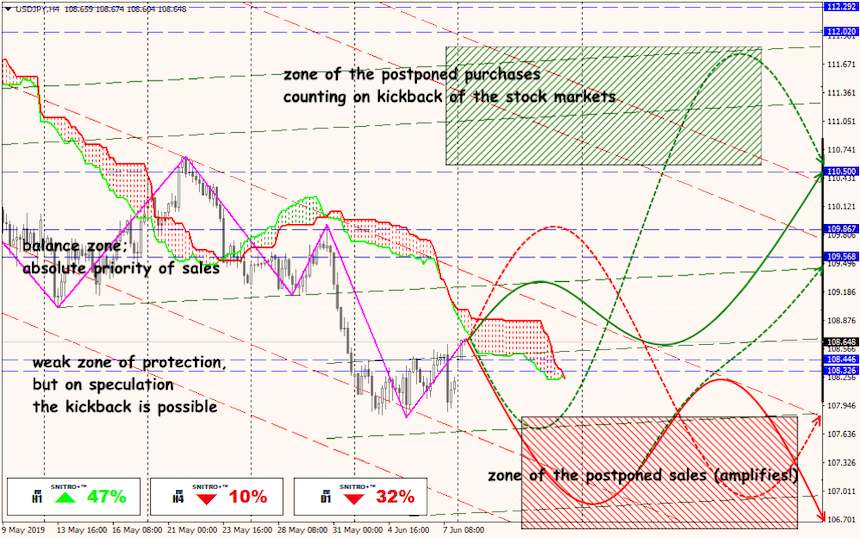