The market in the active drive: Trump in a game so far, is time to say rates

The tax gambit of Trump smoothly passes into an endgame; Saudis have won next victory.

DPRK tries rockets and universal patience. The last NFP, FRS and the ECB are on the agenda.

On Saturday the Senate of the USA, after all, has passed the distressful 500-page bill of tax reform that it is possible to consider the first political victory of Trump. Legally decision yet not final: the adopted bill has to be combined with the similar act approved by the House of Representatives and it can take some more days.

Nevertheless, the Joint committee on questions of the taxation (JCT) has stated that the offered reform won't allow generating such increase in budget revenues due to the acceleration of GDP. Experts consider that the offered reduction in taxes will cause the growth of the national debt (which is already making $20 trillion) by $1.0-.,4 trillion within 10 years. By the way, on Friday the term for the adoption of the next decision on national debt level expires to avoid suspension of work of the government.

The subject of FRS remains main, confidence of the market on increase in a rate to 1.5%, and respectively, on strengthening of dollar − almost 100%. In addition to economic statistics, steady growth of the American state bonds points to a similar succession of events. However, there is a wish to remember John Maynard Keyes who considered that «the market can remain irrational much longer than you will be able to remain solvent».

After messages from ABC News, the dollar has lost all positions: the ex-adviser to the president Michael Flynn is ready to cooperate with the team of the special prosecutor Mueller and to give evidence against the team of Trump, members of his family and the president. The subsequent denial of this information hasn't reduced the negative impact on the markets.

A number of opponents of Trump among Republican senators in case of negative development of investigation (an impeachment or criminal charge), will become less compliant that can make final ratification of tax reform impossible. At the moment, any negative during negotiations in committees of the U. S. Congress will be short-term, as well as reaction to negative statistics of the USA, statements and actions of DPRK (certainly, excepting the beginning of the nuclear war).

The meeting of the president of Germany Steinmeier with leaders of the block of CDU/CSU Merkel and Zeekhofer and Schultz, the head SDP party, was closed, participants of a meeting don't comment on results, except Schultz who in 5 minutes of an angry press conference has reported that «all options on a table», but there is no green light yet. Participation of Macron in coalition negotiations, as guarantor of the European decisions for Germany, isn't excluded.

Formation of the coalition of Merkel + Schultz potentially bears a global positive for euro, but the decision will be made at SDP congress on 7-9 December (the forecast − a strong gap up EUR/USD at the opening of the week since 11 December). Even when obtaining the mandate on negotiations it is expected that formation of the government will become possible only in February (Schultz's resignation isn't excluded following the results of a congress).

The pound for the last three weeks has become stronger almost on 400 points on optimism of Brexit. There has passed information that Great Britain and the EU have reached consent concerning financial payments (€40-45 billion), but official recognition of the sum of payment isn't expected, only the calculation methodology which will determine the debt size will be presented.

The problem of the border between Great Britain and Ireland isn't settled yet that potentially threatens the transition to the second round of negotiations on 14-15 December. May has to declare final arrangements within an official dinner with the head of European Commission Juncker today. New signals of the influence of an exit from the EU to the British economy can be obtained after the publication of PMI in the service sector of Great Britain.

Saudi Arabia has won an important victory: the countries of OPEC and OPEK+ have agreed about the prolongation of the agreement until the end of 2018, however at the summit on 22 June are planned to overestimate a situation regarding the need of extension. The consent of Libya and Nigeria to limit oil production to the maximum levels of 2017 became a pleasant bonus. Functions of monitoring committee on control of the implementation of the agreement are expanded. The outcome of a meeting has been expected and already fulfilled by the market. Oil production in the USA has grown higher than the levels of 2015 that current week increases chances of fixation of profit on long positions.

November NFP has to be something average between reports of September and October, but taking into account growth of expectations on ratification of tax reform any data on the labor market will hardly become a reason for strong sales of the dollar. At a release of strong data, the growth of dollar can be excessive and steady, especially with a growth of salaries higher than 2.7% against the background of falling of unemployment rate lower than 4.1%.

Powell's answers in banking committee of the Senate have indicated that he is ready to adhere to a policy of normalization of rates in Yellen`s style. In FRS «the silence period» has begun which will last prior to a meeting on 13 December. The ECB will open such period on Friday.

Euro is in demand on expectations of the fact that the important statement concerning the closing of the QE program can be made at a December meeting of the ECB. Draghi will participate in a meeting of the Eurogroup today, but, as a rule, his statements at such meetings aren't published; it is necessary to wait for a performance on Thursday within the BIS conference. Traditionally, after the intermediate meeting of the ECB on Wednesday leakage of «insider» through media concerning a meeting on 14 December is possible. 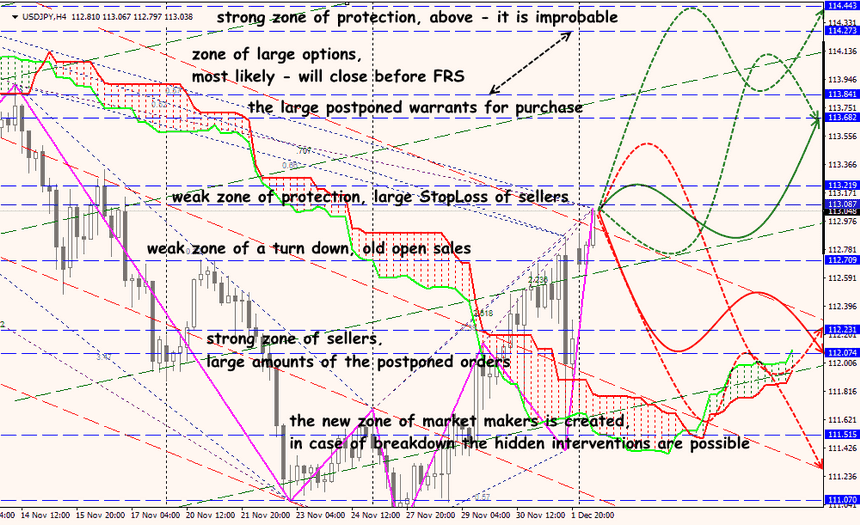