Brexit, OPEC, scandals against Trump, political quarrels and any statistics fade into the background. New hunting for economic repartition of the world is open.

Mueller's investigation does not confirm Trump's conspiracy with the Russian Federation regarding the impact on the result of elections of the 2016th, but notes 10 episodes which are treated as attempts of the current president to interfere with justice. Congress has to draw a final conclusion.

The report of the special prosecutor was obviously partially edited for the purpose to hide confidential data, Democrats demanded to provide them the full text for the understanding of volume and quality of the classified information. The investigation is not completed, but, despite the pressure of the lower house of the U. S. Congress controlled by Democrats, real chances of impeachment to Donald are scanty.

Larry Kudlow actively looks for new candidates for replacement of Kane and Moore with them at a competition in the Fed's Board of Governors. Probably, in response to it, Trump vetoed the bill demanding cancellation of support of the USA of the war under the leadership of Saudi Arabia in Yemen. For cancellation, the Congress will lack voices, but it does not affect favor to presidential proteges yet.

But these problems are not interesting to the U.S. President so far. Now the main thing – oil. The price of basic raw materials grows against the background of strong economic data of the USA and China, progress in trade negotiations, voluntary (and situational!) to decrease in oil production of the countries of OPEC. However the deadline on a total ban of purchases of the Iranian oil comes nearer (on May 4) and Trump will be forced or to prolong exceptions for the countries, the main consumers of oil of Iran, or to continue blackmail of world cartel by the bill NOPEC. So we watch closely not only the prices, but also comments on sanctions, especially − twitt-Trump.

The British statistics appeared mixed, a decrease of the inflation rate did not please, but steady growth of salaries against the background of retails speaks well regarding the increases in a rate of BOE, certainly, in case of the safe solution of problems with an exit from the EU.

The parliament of Britain returns to work, but a vote regarding Brexit options is not expected. Negotiations with the Labour Party did not yield result yet. Regional leaders prepare the petition for Corbyn with a request to abandon the claim for holding a referendum to reach a compromise with the government regarding the preservation of membership of Britain in the Customs union with the EU. In the case of such arrangement between May and Corbyn the growth of pound and, subsequently, euro is expected.

FRS switched to a silence mode before a meeting on 1 May, and the ECB on the leaving week pleased with two contradictory insiders. Sources reported that the forecast of the ECB for the growth of the economy and inflation considering their repeated revision on decrease causes mistrust of most of the members of the Central Bank. The second insider more hawk: members of the ECB do not feel enthusiastic concerning the introduction of a multilevel system of deposit rates as it is too difficult for realization, and advantages are minimum.

So current week it is worth listening to the vice president of the ECB Guindos on an action on Thursday in New York organized by the European and American chambers of commerce.

Statistics of business activity (in a manufacturing sector of Germany and composite PMI of the eurozone) struck euro while strong statistics on foreign trade and retails of the USA allows expecting on the growth of the American analog at least, for 2% year on year. On this background, the euro is actively sold out, but reports from the front of a trade war remain the main factor of pressure upon the euro:

GDP for 1 quarter, durables, research of moods of consumers according to Michigan and reports on the sector of the real estate will be the main statistics of the USA current week. On the Eurozone, we pay attention to the IFO index of Germany and also the consumer confidence index. Only minor data are expected regarding economic releases of Britain.

Yuan exchange rate confirmed progress in trade negotiations, and the GDP of China last week was more positive than expectations that maintain the appetite of investors to risk in a zone of Asian assets. On Thursday BOJ will make the decision on an interest rate, surprises are not expected, we listen carefully to accompanying comments of the regulator and a press conference. 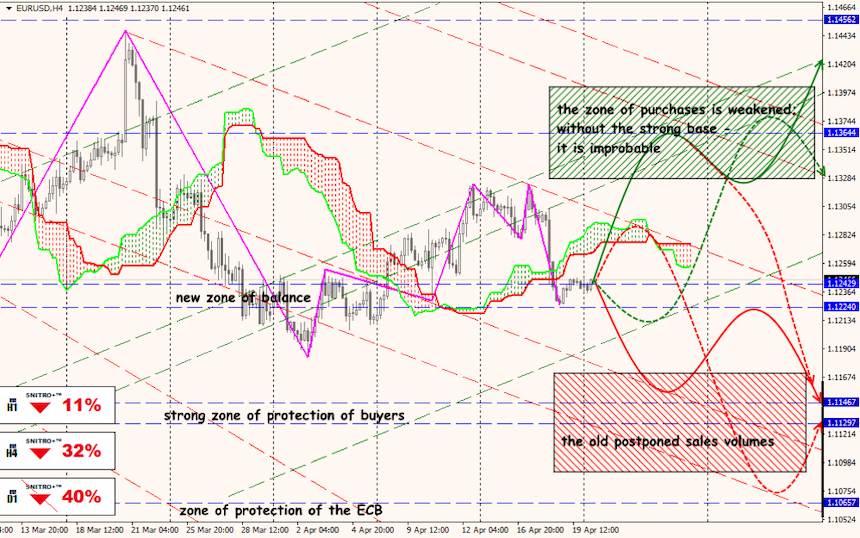 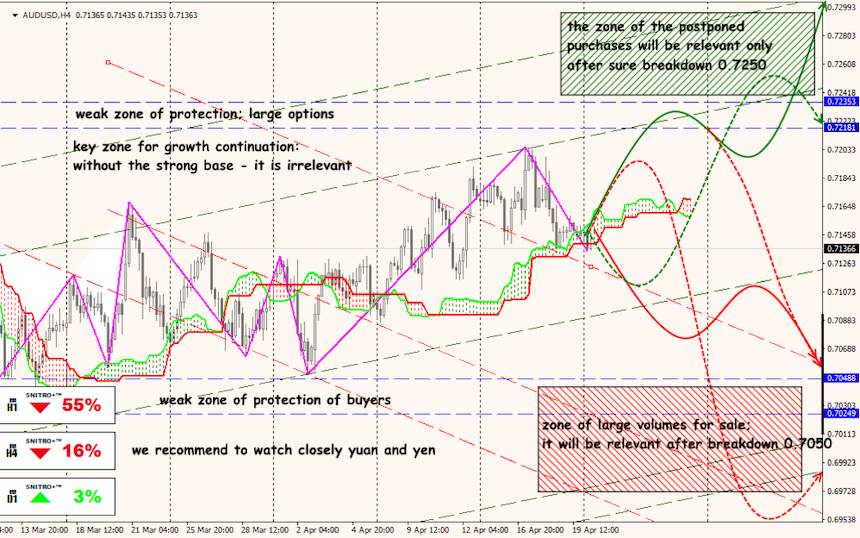