The market as a theater of the absurd: old actors and new scenarios

Solo of the Central Banks: active speculation of the ECB, disappointment from BOJ and expectation of FRS.

Coalition fights in Italy, the Iranian nuclear collapse and the Korean truce. Trump is again on the stage - the peacekeeper, the blackmailer and the businessman.

Draghi was succeeded to bring euro out of trade range, having lowered couple of EUR/USD to a three-months minimum though his surprisingly optimistical performance, obviously, has been directed on the return reaction. The head of the ECB recognized that the ECB is confident in inflation growth, the eurozone will hardly keep growth rates, but risks for the economy are balanced, protectionism is called again the main thing from them. Nothing concrete, as always, has sounded, but judging by the next insider from the ECB:

Judging by the reaction of euro, the markets too early began to underestimate readiness of the ECB to begin normalization of policy and have switched the attention to FRS. The current falling can be considered as a search of new levels for start up./

News from Italy encourage, but keep the markets in a tone. At the beginning of a week, Salvini will try to talk over Di Maio again, but the strong negative for euro is possible only at the union with Berlusconi, and there is practically no chance left of it. It is obvious that the Democratic Party of Italy is ready to create the coalition with party «5 stars» under pressure from Merkel, Macron and the president of Italy. There is no balance of forces in Democrats, the risk of the conflicts remains, but the formation of such coalition is most probable, and participation of Democrats in the coalition guarantees the pro-European government. At documentary registration of the coalition, it is necessary to expect a serious long-term positive for euro.

The EU intends to offer Great Britain closer relations after an exit from the block if May decides to keep membership in the Customs union. Brussels and London continue the opposition and progress is still hardly noticeable.

The pound has received new blow: GDP in 1 quarter was failure though revision of data towards an increase in the subsequent publications isn't excluded. Market expectations to increase at a rate of BOE at a meeting on 10 May have fallen up to 20%; there is no positive on Brexit too and nothing interferes with further falling. The ascending correction is possible in case of the release of PMI of the industry and services (Tuesday-Thursday) above the forecast which will allow the pound to begin the ascending correction.

The meeting of FRS on 2 May will be ordinary, without economic forecasts and Powell's press conference, changes of a rate aren't expected, only the brief accompanying statement is planned. Assessment of growth of the economy and labor market will be already traditional optimistical, the main attention − on inflation estimate which directly depends on today's publication of inflation of consumer expenses. It is unlikely FRS will be ready to draw some conclusions from the achievement of the goal of inflation, at least, prior to a June meeting.

Labor market of the USA since the beginning of year shows the strong potential of growth of salaries and falling of unemployment rate so NFP which is coming on Friday is expected optimistical.

From the military units of Trump current week it is expected:

Costs of chic reception of the president of France, most likely, will pay off: the USA tries to split the EU from within, Macron and Trump's total press conference indicates progress in this regard. Macron has said that in trade between France and the USA there are no problems, the trade balance between the countries is balanced, Trump has reported that the conclusion of the bilateral trade agreement between the USA and France will be very favorable to both parties.

Results of a similar meeting with Merkel, apparently, will disappoint many, and first of all – the German business. After the success of negotiations between two Koreas, Trump with the new strength is going to be at war on two fronts; the factor of the European pressure in the form of promises of support in a trade war with China gradually weakens. Without a decision on the liberation of the EU from an increase in duties on steel import and aluminum, the union of the USA and the EU against Asians is improbable. The term of a delay of duties expires on tomorrow.

The exit of the USA from the nuclear agreement on Iran isn't expected, the additional agreement is preparing. There is information that large oil traders already avoid contracts for the Iranian oil products with validity period after May 12. They will probably exercise the right to stop accepting freights in case of repeated imposition of sanctions. But Trump hasn't announced the decision yet and any insider on this subject is important for dynamics of oil.

The current week the report on the growth of inflation of consumer expenses, ISM of the industry and services, the report of ADP and NFP will be the main data of the USA; on the Eurozone, we pay attention to inflation for April, GDP of the Eurozone and PMI. China will also please with the PMI on Monday, Wednesday and Friday.

There are no events yet which could provoke decline of the dollar if only FRS doesn't give a surprise or April NFP strongly won't disappoint − both scenarios are improbable. 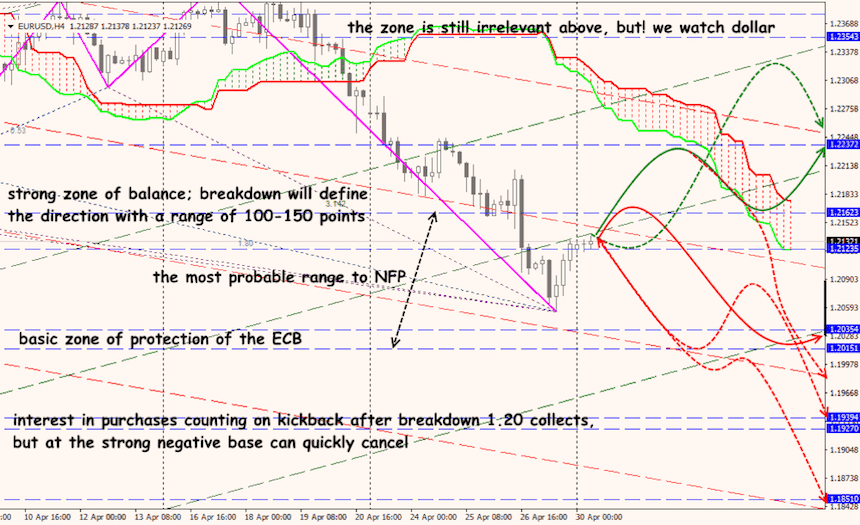 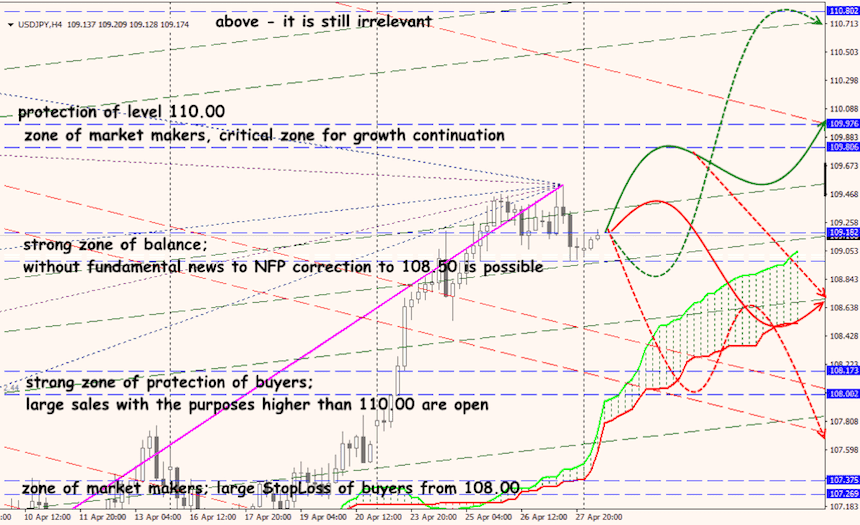