The main thing – maneuvers! A regrouping of forces before autumn approach

Britain determines the price for an exit; the markets wait for toughening of policy of the ECB this fall.

The main currencies have risen; the dollar has finished the auction with moderate decrease; the Bank of Canada has raised a rate; the dollar suffers from a lack of inflation;

The intervention of the USA in the conflict with Qatar has allowed the quotations of oil to continue growth, the opposition has passed into a slow, but stable form. Even decrease in oil production of the OPEC countries to the lowest level from the moment of the effective date doesn't put strong negative pressure on the market any more.

Against the background of the next series of a compromising evidence on Trump`s communications with the Russian Federation the Senate of the USA has canceled the first 2 weeks of vacation because of lack of progress in reforms, the beginning vacation is postponed to August 14. Urgent acceptance of a health care reform and a compromise on the draft budget of the definition of a Trump`s corporate tax rate and a boundary tax is planned. Ratification of a health care reform (a deadline − on July 28) will allow switching to tax reform that will become a positive factor for the growth of dollar.

Yellen has declared the optimistical forecast for the economy, but at the same time hasn't sounded concrete terms of further increase in a rate or reduction of balance of the Central Bank. But sharply negative statistics on inflation and retails have provoked sharp falling of profitability of state bond of the USA and have strengthened doubts concerning the prospects of the next increase in a rate by FRS this year. The majority of currencies still have a chance to grow up against the dollar until July 26, when FRS makes the decision on an interest rate. According to the insider, Trump categorically doesn't agree to leave Yellen for the second term, Gary Cohn, the head of the National Economic Council of the White House, is considered the most probable applicant for a post of the head of FRS.

Draghi has to prepare the markets for the forthcoming turning of incentives so that the actual announcement hasn't led to the sharp growth of profitability of state treasury bills of the Eurozone countries and euro. EUR/USD has already hanged near 1.1500, and the growth above will take away competitive export superiority of the southern countries of the Eurozone.

As always it is necessary to keep up not only with rhetoric but even behind a mimicry superMario at a press conference: it is known from the insider that the ECB won't establish an accurate date of completion of QE, but the strategy of closing of incentives has to be presented till December 2017, to make the preparation of the markets consecutive. That is the official statement has to be either on September 7 or at a meeting on October 26. It is already clear that a part of the QE program in the form of purchases of ABS will be finished in December 2017 without extension as she didn't make a success. Banks expect the end of the QE program not earlier than June 2018.

According to the CFTC`s report, the volume of long positions on EUR/USD has reached the highest levels since 2011, that means if Draghi disappoints the markets, then the rapid closing of purchases will lead to the steep decline of eurodollar.

Draghi plans to take part at a conference in Jackson Hole on August 24-26 where he will announce the recovery of the economy of the Eurozone. It will be a FRS`s meeting, the first for three years, with the invitation of the ECB`s head, and it is happening when many Central Banks either have already begun to reduce stimulation volumes or think of it. As for the European reports, Germany has published data on inflation for June which have coincided with forecasts and the previous value and couldn't motivate players to sales.

The head of the European stability mechanism (ESM) Klaus Regling has said that the EU needs to have the limited joint budgetary potential for support of certain member states in case of sudden crisis. Such reserve fund is estimated at about 1-2% of GDP of the eurozone (€100-200 billion). The European Commission also allows release joint debt obligations and maintaining the joint budget after Great Britain finally leaves the structure of the EU in 2019.

Britain for the first time after the Brexit openly recognized financial obligations to the EU, though estimates this statement rather as an attempt to improve the general tone of negotiations than as a real concession. Negotiations will be in the deadlock until Britain at least doesn't recognize that it has to fulfill financial obligations on the law before leaves the block. Possible amount of debt is estimated at €40-60 billion, a number of representatives of the EU speak about the sum of €100 billion, but everything still looks too ambiguously.

However, this step can put an end to acute contradictions in negotiations next week. The text of the address published by the minister of an exit of Great Britain from the EU Eneley Joyce has been regarded by Brussels as a potentially important event. However, there is no unity of the British on this matter yet. The second round of negotiations with the European Union will pass on July 17-24, we will hope that positions of the parties will continue to approach and it will give additional support to pound.

Information on the current week which needs to be traced: GDP of China, a consumer price index of Britain, eurozone and Canada, inflation of euro for June in final assessment and the ZEW index of Germany, the decision on a rate of the Bank of Japan and the ECB. Also in focus the corporate reporting of Bank of America, Morgan Stanley and Goldman Sachs and also nearly 70 companies which are a part of the S&P 500 index. The first round of negotiations on the Brexit will begin on Monday, July 17. We don't forget about traditional oil on Wednesdays. 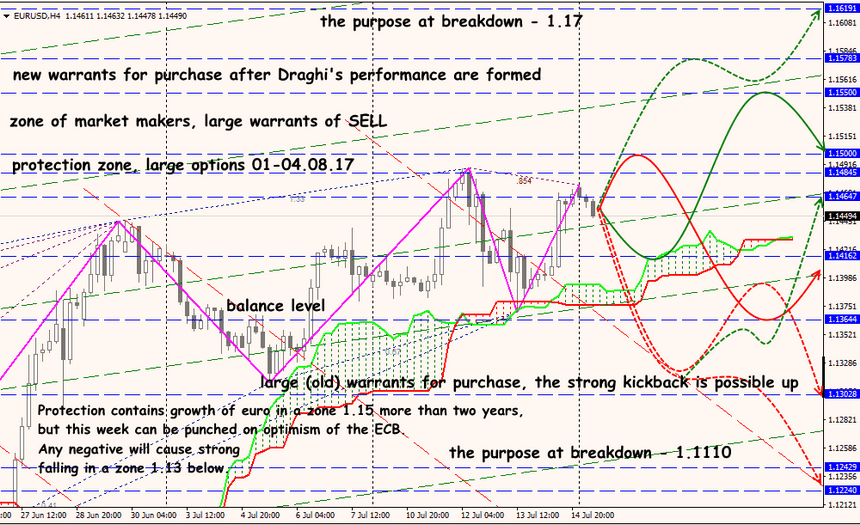 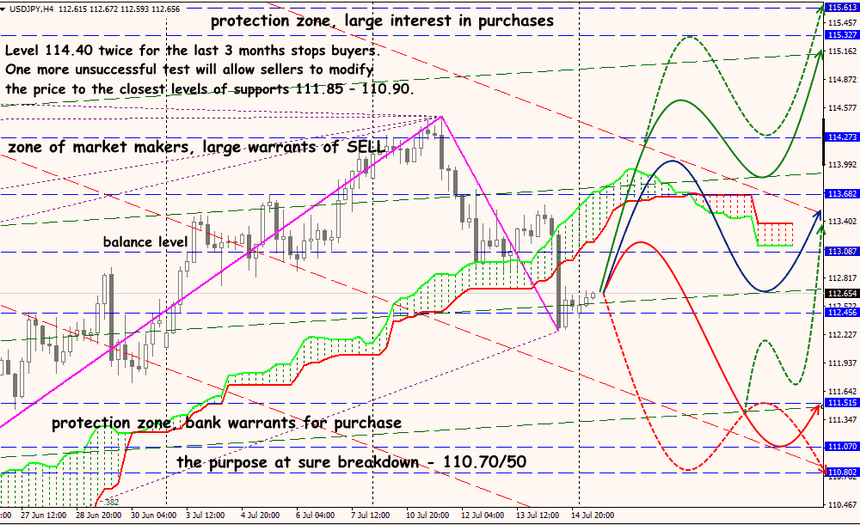