The last chance for those who lack the trade drive

California on fire; Brexit on a boiling point; Draghi is absolutely quiet, and Italy got a deadline for adjustment of the budget. Thanksgiving Day and Black Friday ahead.

May achieved the Government's consent by rather an expensive price (Raab's and other`s resignation), and these victims are not the last. There are still no voices for ratification of the agreement in Parliament. Euro-skeptics still hope to change conditions of open border with Ireland and the period of participation of Britain in the Customs union, but the EU stated that there will be no more concessions and this version of the agreement is the last. During the 21-month transition period Britain remains the subject of all rules of the EU, continues to pay contributions to the budget of the EU and to follow the rules of free movement of labor.

Conservatives prepare a vote of no confidence – replacement of the Prime Minister, according to them, something will give chance to change. May missed the chance to stabilize the situation having appointed the new minister of Brexit any of the opponents but preferred Stephen Barkley, little-known, but convenient for herself, and now this minister has no right to conduct direct negotiations with the EU. If Premier Lady keeps the post, then the agreement will be signed on 25 November at the EU summit then it will be possible to begin discussion of the trade agreement. The Brexit option without agreement is not favorable to anybody, but also it is allowed. Otherwise, disintegration of the coalition will lead to early elections to Parliament and a probable victory of Labourists led by Corbyn and to the steep decline of pound (up to 5% of the current levels), and together with euro.

We wait for the report of the European Commission on the budget of Italy on 21 November, most likely, the assessment will be sharply negative. At best − from 3 to 6 months will be provided to the government for confirmation of the actual reduction of a national debt that will cause a short-term negative for euro. At worst ESM will need a transfer of pledge of 0.2% of GDP of Italy in Stabilization Fund of the EU for the subsequent payment of a penalty for violation of the budgetary rules of the EU − decline of euro will be longer and large-scale. The internal conflict in the ruling coalition of Italy accrues, Salvini held a meeting with Berlusconi, but the steady union from Di Maio is still improbable.

The latest data of statistics showed again that the Eurozone is not ready to problem Brexit: the investor confidence and surplus of trade balance fell short of the forecast. Draghi's performance took place without surprises, but it is obvious that at any deal euro QE will be finished in December. Any hints on «pause» in a trade war with Asians will do good to euro.

Media slightly pleased the market with insiders about a positive in negotiations between the USA and China, discharge from negotiations of the trade adviser Navarro and on possible cancellation of increase in the customs duties on import of China since 1 January 2019. On Friday Trump personally announced progress, though considers offers of China insufficient.

Despite draconian tariffs, deficiency of foreign trade of the USA with China in the third quarter in comparison with the same period of last year grew from $92.2 billion to $106 billion. Actions of the White House are inefficient, the question is too difficult to solve it within one conversation. Donald dreams to conclude with China at least the preliminary, framework agreement similar to the contract with the EU in the person of Jean-Claude Juncker in July of this year. But everything will depend on the results of a meeting at the summit of the countries of the G20.

Trump has no time for the foreign policy yet: a preliminary estimate of damage from the strongest fires for the last decades in California exceeds $3 bln.; the number of the victims and missing persons is more than 1300 people. The stock markets will grow on optimism of Christmas sales and in the run-up to Trump and Xi Jinping's meeting if the new political negative, of course, does not appear. Anyway, change of rhetoric of the USA on negotiations with China, tightening with the announcement of duties on import of a car promotes dollar depreciation.

The U.S. President gave the written answer to questions of the special prosecutor Mueller, but the subject of communications of Trump with the Russian Federation will become relevant before the change of structure of the Congress again in January. Democrats will hardly allow pressing on the investigation, and any «cunning» combinations of Trump will only strengthen impeachment probability.

Current trade week short; on Friday day off, Thursday – a short session; large players will carry out fixing of profit on Wednesday. According to the statistics we pay attention: the USA − durables, reports of the sphere of construction, a research of moods of consumers according to Michigan; the Eurozone − PMI of the industry and services sector for November. Today it is possible to look at live broadcasts from a meeting of the Eurogroup: debt problems of the southern EU countries, migration policy, trade relations with the USA.

There won`t be economic releases on pound, but Carney and some more officials of BOE will report on rates of inflation and also will read the forecast of an economic situation before Budget committee of Parliament of Great Britain. The protocol of the ECB as of 25 October will be published on Thursday, but its influence on the markets is improbable; only the insider after the intermediate meeting of the ECB on Wednesday can affect euro. 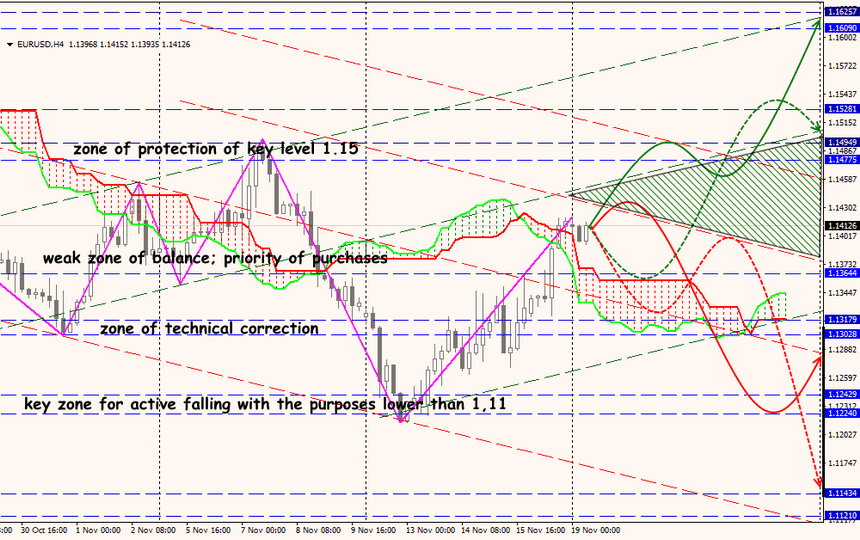 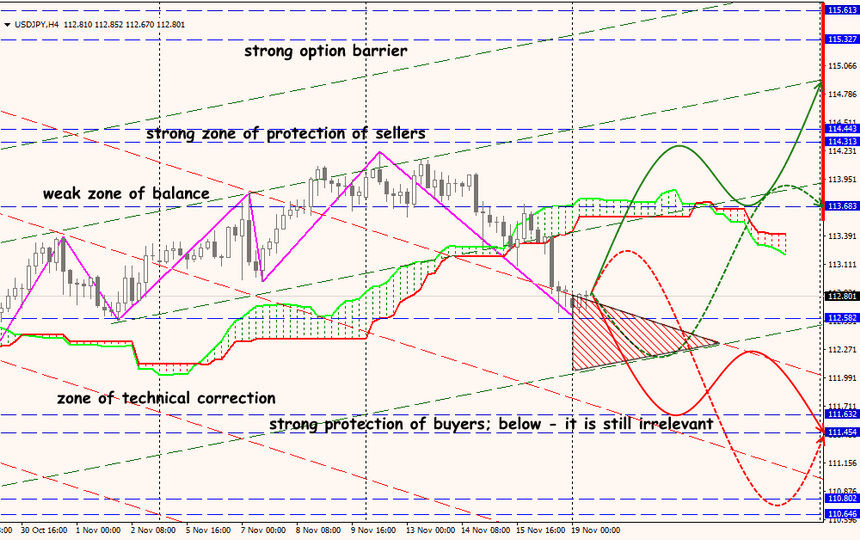 Author: ,
Back to list of articles
Analytics
Customer support 24/7