The dollar is sick but it doesn’t lose credibility

Trump is agitating and threatening; China is confidently defending itself; Euro compensates the dollar for its unreasonable growth. Another week passed under the banner of flight from risk.

Investors continue to buy the dollar, fearing that Trump is ready for new protectionism to maintain morale: Canada, the EU and the UK have already received warnings about new trade tariffs. In addition to pandemic statistics, only information on projects to help the American and European economies is affecting the fundamental background.

Leaders of old Europe are actively seeking consensus on the EU Recovery Fund. Lagarde’s statement that a decision may not be reached at the July summit enhances the likelihood of open conflict. The President of France held talks with the Prime Minister of Holland, but the markets did not receive final joint statements. Today Macron is dating Merkel; they did not promise a press conference, but it has already been stated that a new plan for the restoration fund is not expected. Official information or insiders will make speculators nervous.

The postponement of the date of the EU leaders summit from July 9-10 to July 17-18 does not add optimism, moreover, the second wave of coronavirus may change plans for a «face-to-face» meeting. Given that all compromises in the EU are possible only after lengthy, exhausting negotiations, virtual «meetings» allow you to maintain comfort for the participants, but greatly reduce the likelihood of any serious decision being made.

The pound is going down amid fears of lowering BOE rates in the negative zone, and even positive economic data cause the only correction. The chances of a deep recession are growing steadily, especially since, after quarantine is relaxed, the UK is at particular risk of a second wave of the pandemic. The last time such a degree of British pessimism was observed last year before the election. Hedge funds and large private traders hold maximum volumes for sale and are preparing for a new massive fall in the British currency.

A new round of negotiations on Brexit «face to face» may give the necessary breakthrough, at least, to regulate the fishing industry. The likelihood of global progress is minimal.

The information that the Fed will mitigate the restrictions stipulated by the Volcker rule regarding venture funds has slightly shifted the focus of attention from the alarming pandemic data to the stock market.

While Trump is actively «joking» about the excessive number of tests for coronavirus, FED’s bank stress tests have shown shocking results. It was assumed that the US housekeeper would begin to recover from the first wave of the epidemic, but the second outbreak would cause a deeper recession. In this scenario, the 34 largest banks in the country will lose a total of up to $ 700 billion.

As a result, FED has banned banks until September 30 from buying back their shares, as well as increasing the size of dividend payments. The eight largest US banks have already made a voluntary decision to suspend stock repurchase programs until the end of July. By the way, ECB recommended that European banks completely stop paying dividends for an indefinite period. The recommendations of FED suggest restrictions, at least until the end of this year with the possibility of extension.

Blackmailing Trump on the topic of controlling payments in China and limiting settlements on US Treasury bonds gives a «result». Beijing is taking aggressive new steps to undermine the status of the dollar as a global reserve currency, of course, in favour of the renminbi or its counterpart.

Recall that the effectiveness of direct oil trading for yuan was proved in April 2020: when WTI price was negative at NYMEX site, the cost of SC oil in China remained at 280 yuan (approximately $ 40). This allowed large Asian customers to avoid financial and production losses.

Last Monday, Fan Sinhai of the Securities Control Committee of China announced the creation of a Chinese system of international and clearing settlements, similar to SWIFT and CHIPS. So soon the American debt will grow not only in dollars but also in yuan. The moment for such a blow to the image of the pre-election Trump was chosen very well.

China returns to the exchanges after a long weekend, government rhetoric will be negative for risk appetite, Beijing has already said that the «first phase» agreement will be terminated if the US sanctions bill in response to the Hong Kong National Security Act.

Analysts on both sides of the Atlantic are convinced that Trump will not aggravate the conflict with Beijing but do not forget that the «baby» Donald is an anomalous phenomenon and can not be standardly analyzed.

What awaits us this week:

The document is traditionally outdated, especially since several strong reports have already confirmed the active recovery of the US economy, but its publication can cause a significant reaction. Its main emphasis is the reasoning of the Fed members about the need for new incentives; it is unlikely that the protocol will include an extensive discussion of targeting the T-bills yield curve. At the current stage, it is important for us to understand whether the intentions of the Fed members to keep rates are maintained.

The June NFP is expected to be strong and should confirm the recovery of the labour market. This time, market participants will not receive all the indirect data, ISM services will be released on July 6, in connection with which the data will be difficult to predict. For example, the forecast for the ADP report is 3.5 million − a gigantic figure that would normally cause a serious strengthening of the US currency. However, under current conditions, these 3.5 million new workers will have little effect, since, over the past few months, about 20 million people in the United States have lost their jobs.

In any case, we focus on the unemployment rate: a fall of 10% may disrupt the general correlation of markets and the dollar may begin to grow at a risk appetite.

On Friday, US trading floors are closed due to Independence Day.

On Wednesday, Powell, together with the Secretary of the Treasury, will report on the progress of assistance programs to the U.S. Lower House Finance Committee; any announcement of new Fed incentives is unlikely. More informative may be the rhetoric of Fed members following the publication of NFP.

An information vacuum continues in the ECB; on Saturday, Lagarde will take part in an online discussion; the lack of new information after the backstage talks of EU leaders will close the euro in a medium-term flat. A clear negative attitude towards the EU recovery fund will lead to an active fall in all assets with the participation of the euro. 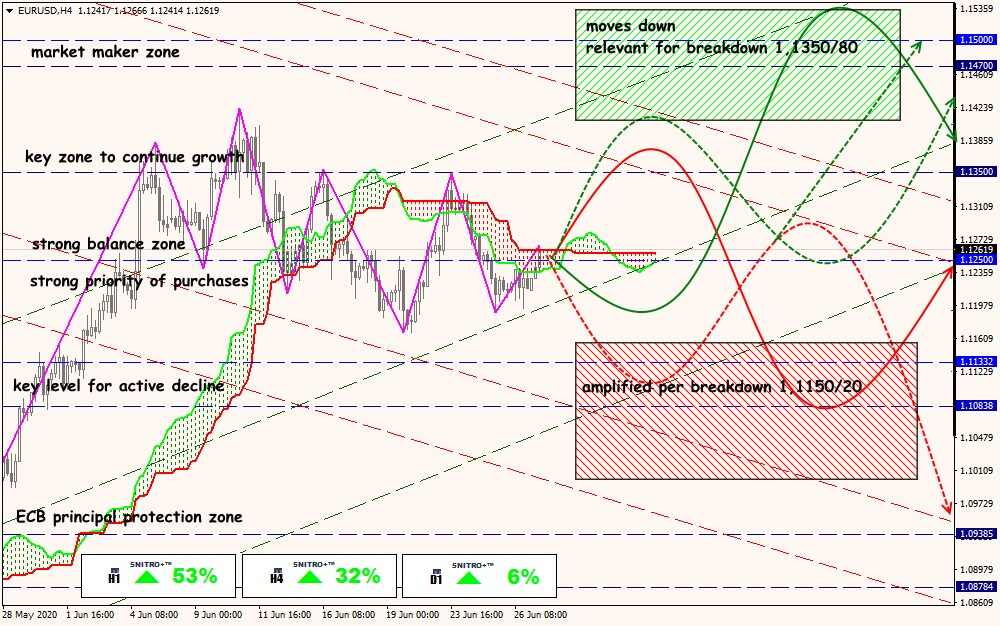 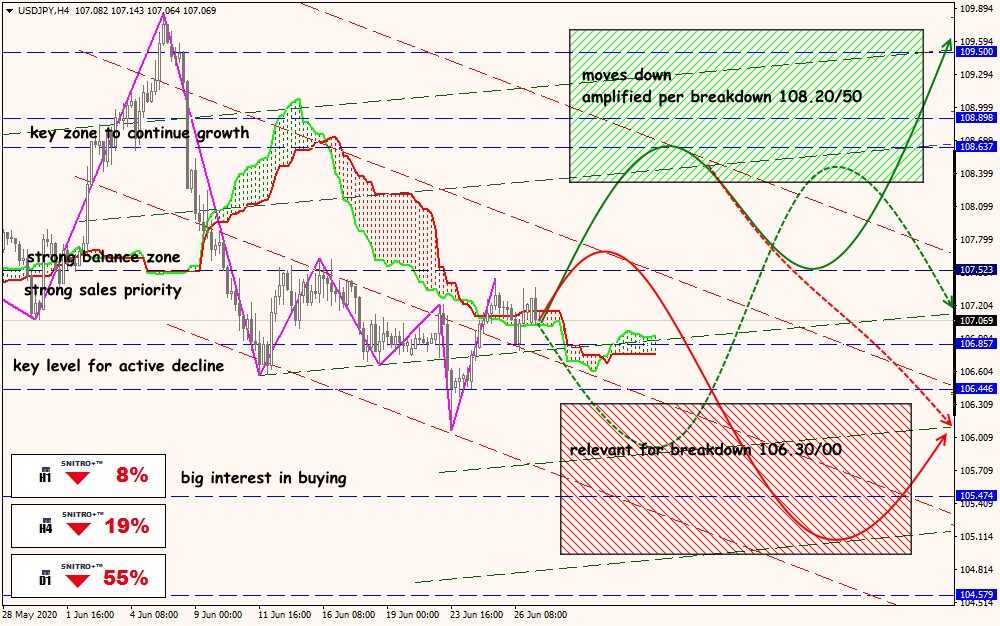 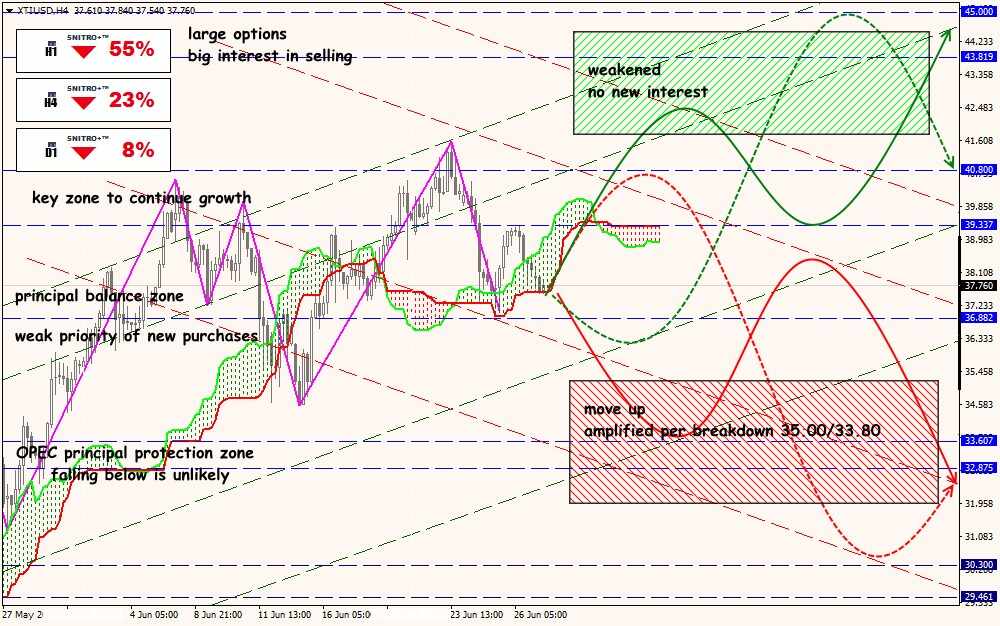