The dollar does not lose optimism

April NFP left confidently strong; Trump aggravates a situation with China; Mai offers truce; share players actively buy up dollar. All of us are waited by very interesting May.

But large participants quickly locked in profits on a first thorn, and the next weak report of ISM services against the background of performances of members of FRS accelerated decline of dollar on closing of week. Market expectations on increase in a rate are estimated as zero, chances higher for decrease, but all the same scanty, even when inflation falling in case of continuation of growth of economy of the USA

Insiders about Trump and Xi Jinping's meeting next Friday became a counter of the leaving week, but Trump unexpectedly reported about increase in duties on import of goods of China from 10% to 25%, in particular, starting from 10th May. Details of such aggravation stay behind scenes so far. Trump announces slow progress in negotiations and attempts of China to correct already reached agreements, the Chinese side abstains from comments. Such situation already caused sale of risk at opening of week, but most likely, Beijing will make concessions again and the situation is quickly normalized.

The only successful idea of Donald, tax reform, will stop stimulating economy of the USA soon, and in the most improper time − before elections of 2020. A failure in regard to the DPRK, Iran, China, Mexico, problems with ratification of NAFTA-2 in the Congress, delay of economy of the USA because of trade wars and growth of dollar, force Trump to look for a whipping boy constantly. And Powell is appointed the most convenient victim.

Extremely nervous statement of Trump for need of decrease in a rate of FRS on 1% and start of the QE program for monetization of a national debt of the USA causes strong desire of the market whales to sell dollar as soon as possible. The next statement of FRS was optimistic in a subject of growth of economy of the USA, but negative in inflation growth assessment. The markets expected from Powell bigger readiness to react to decrease of the inflation rate after the large-scale attack of Trump, and as a result only the decision on decrease in a rate on excess reserves for 0.05% up to 2.35% was madewhich the head of the Federal Reserve called technical adjustment. Against the background of spring aggression of Trumpthe attempts of Jay to defend independence of the Central Bank from the politics look weak therefore any growth of dollar on a subject of FRS will be short-term.

On Thursday Powell will make a brief opening statement on development of FRS, emergence of the new ideas is extremely improbable, and in general FRS will remain in the pause mode till September.

New sanctions of the USA against Iran with a total ban on purchase of the Iranian oil officially took effect, but the USA will control their performance independently, there will no help from OPEC+after active blackmail of Saudis by the NOPEC bill.

There is no progress in trade negotiations between the USA and EU, the deadline expires on 18 May and even transfer of this term does not solve a problem. In case of increase in duties on import of all cars and auto parts of the EU for 25% decline of euro will be strong and long. Draghi will answer questions of students on Wednesday and, if desired, can estimate signs of a recovery of the economy of the Eurozone that will lead to growth of euro. The traditional insider after the intermediate meeting of the ECB on Wednesday is not excluded. The policy of the ECB remains sparing, increase in incentives is almost impossible, and market expectations on increase in a rate of the ECB are equal to zero while arrival of the new head of the ECB can lead to sharp change of expectations of the market.

The pound fell in price after BOE raised the forecast of economic growth, but warned that the situation with Brexit saddens prospects of monetary policy. Postponement of Brexit for October 31 does not give the chance to raise rates as the period of economic uncertainty also lasts.

Tuesday is a very important day for the Brexit. May has to present the plan about the prospects of membership of Britain in the Customs union of the European Union. The essence of the plan is that London will conclude with Brussels the interim customs agreement which will work prior to the next parliamentary elections, that is till 2022. Information has informal character, but the fact that May is ready to concede to requirements of the head of labourists Corbyn after failure results of local elections, an indisputable fact. The version of the agreement which will actually keep Britain within the Customs union with the EU is offered labourists and also will meet the requirement about the rights of workers identical to laws of the EU. Theresa hopes to sign such agreement till 22 May that it is improbable, but at the positive decision the pound will receive a boost to growth which can pull euro.

Current week the report on inflation of the prices of consumers and trade balance will be key statistics of the USA, the report of JOLTS can be interesting to fans of labor market. Regarding the Eurozone it is necessary to trace the final report of PMI services and a trend in economy of Germany in March. China publishes trade balance on Wednesday and the report on inflation on Thursday, but against the background of trade and political fights it will hardly notice the market. 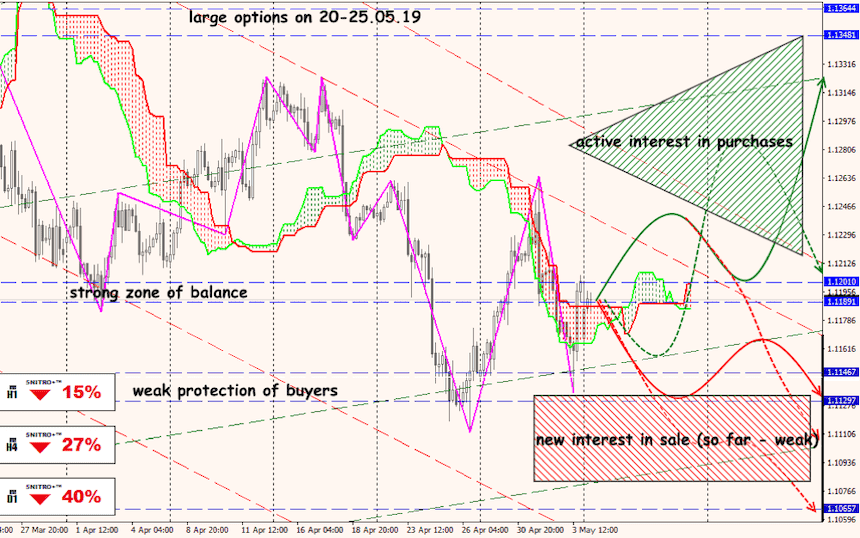