The American tour or how to trade autumn dollar

Trump has actually failed Asia tour: hasn't agreed with Japan, hasn't convinced Beijing on trade concessions yet, hasn't signed the agreement on Northern Korea, but has managed to shake hands with all and to play golf. It is stated that it was succeeded to establish the new scheme of the interrelation of the USA and China and though in general opposition continues, the new «friendship» started between

Trump and the president of China Xi Jinping indicates possible use of the more gentle approach.

Priority of national interests of the USA before global in the international economy and policy of direct trade agreements haven't got the support of participants of a forum as well as before – at the summits of the G7 and G20. Congressmen of the USA wait for Trump's return with hope, the special prosecutor Mueller – with a revenge anticipation, and investors have already reacted with fall of basic American assets almost by 2%.

The issue with the appointment of the vice-president of the head of the Federal Reserve isn't resolved yet though Trump is forced to do new curtseys towards Republican Party so, most likely, it will be John Taylor. Last week has brought to Democrats a victory in local elections, increasing chances of a failure of Republicans during the intermediate congressional elections in November 2018.

It is the simplest to analysts to bind decline of the dollar to uncertainty in the performance of tax reform, especially, if Trump insists on cancellation of the individual mandate of Obamacare for compensation for expenses. The president should solve what option of tax reform to take as a basis. The bill of the Senate is more adapted to needs of the middle class and small business, but Republicans can lose at least one voice that considerably reduces the chance of fast ratification. Committees of the Senate begin work since Monday.

It is offered to postpone the reforms to a year, to reduce a corporate tax to 20%, but at the same time to keep the current system of income tax. The markets already nervously reacted to a delay, the national debt of the USA continues growing aggressively. In a short-term, the dymanics of dollar depends on negotiations on a combination of bills of both chambers for which coordination there isn't enough money taking into account the adopted budget with a deficit of $1,5 trillion.

We will mark the following key points.

Last week did not bring progress in process of formation of the government Jamaica coalition, moreover, potential partners even allow a possibility of re-elections in parliament. On November 16 the total official meeting of a Merkel`s party, green and free democrats – the last attempt to reach conciliation will take place.

The free democrats agree to further existence of stabilization fund ESM of the EU but are not ready for a discussion of reforms of Macron on the uniform budget and the Ministry of Finance of the EU yet. Early elections can drop euro for 2-3 figures, even preliminary arrangements will support growth with the same amplitude. But in general, the chancellor is optimistic.

It is considered that the next round of negotiations has ended unsuccessfully though readiness of the government of May to pay £53 billion has been stated. The sum of the British compensation has to be finally coordinated in the next 2 weeks, otherwise, negotiations on the new trade agreement at the EU summit in December will be impossible.

If don't agree until the end of November – chances of an exit of Britain from the EU without new trade agreement and as result, resignations of the prime minister sharply increase. Especially as on 14 November the English parliament votes concerning cancellation of the rule of law of the EU, and on 22 November − on the budget for next year. Doubts about the effectiveness of the current British policy adds to the increased political risks after the Minister of International Development, Priti Patel, secretly (without official notification of the government) held a number of meetings with high-ranking Israeli officials.

It is necessary to trace the inflationary report, data on labor market on Wednesday and retails: large players are ready to sell pound on the slightest negative.

The continuing political cleaning in a business community of Saudi Arabia became an obvious positive for the market: the probability of interruptions in deliveries is minimum, the position concerning restriction of production will be more aggressive that is also considered efficiency factor from the point of view of geopolitical risk.

Intentions to confiscate from princes and businesspersons arrested on suspicion of corruption up to $800 billion is sounded – such is, by preliminary estimate, the cost of the illegally acquired property. However, confiscation will be complicated as the most part of these means is abroad. Funds have to be allocated for reduction of the budget deficit.

The kingdom is obviously not interested in falling of the prices below $50 so the extension of the transaction of OPEK+ and after March 2018 looks very probable. In a question of reduction of the surplus of the offer in the market, a lot of things will depend on production level and export of the American oil.

The dynamic week is expected for the markets.

China will please with the block of important data morning on Tuesday. The economic calendar in the USA will be saturated (the inflation of consumer prices and retails, week applications on unemployment, the production index of FRB of Philadelphia data on the sector of construction). In the absence of growth of basic inflation, the dollar will appear under pressure.

Short-term reaction to a conference of the ECB (on 14-15 November) needs to be considered along with Eurozone statistics on Tuesday; special attention – to the German ZEW index which will give the first assessment by investors of chances of the coalition.

At a conference, there will be a great number of world financial figures, including Yellen, Carney and even Kuroda. Draghi acts on Tuesday in 12.00 CET; heads of the Central Banks will answer questions of turning of soft policy, will share thoughts and experience. At revision of growth of basic inflation in any side it is necessary to expect the strong movement in the debt markets of the Eurozone and for euro. 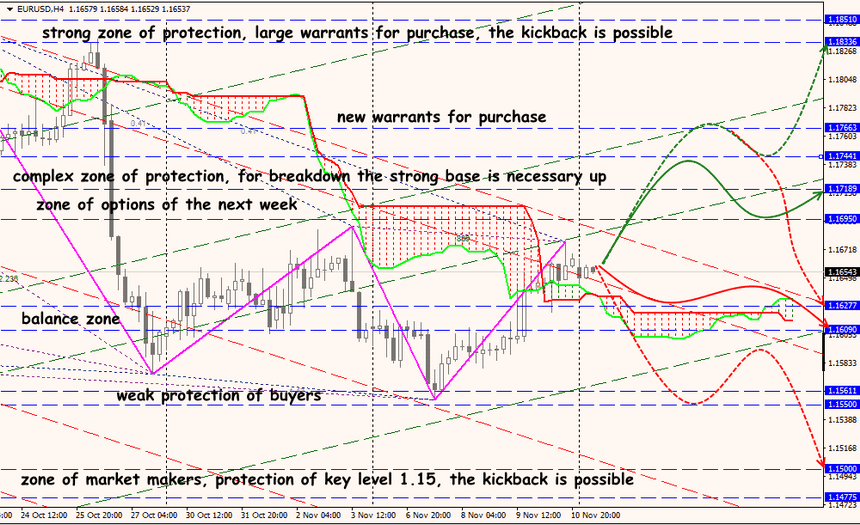 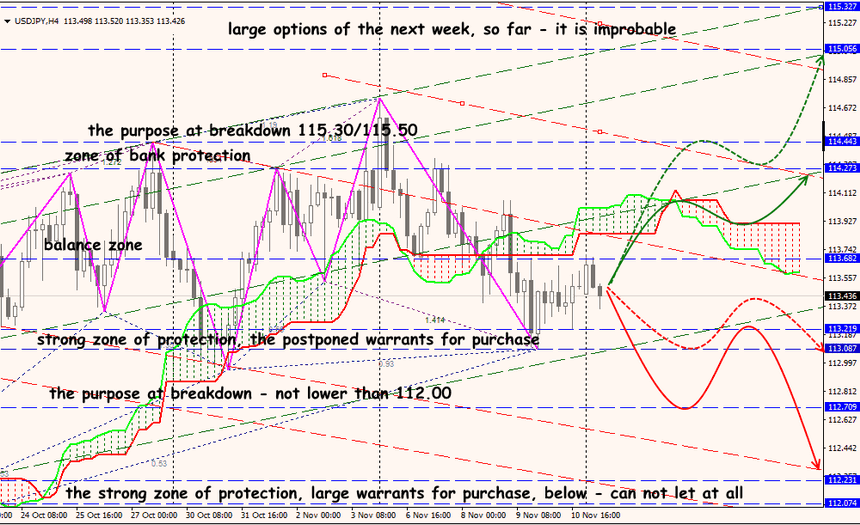