Si vis pacem, para bellum. But there won`t be the winners

Europe panics, and the OPEC increases volumes. Main objectives don't change yet, but it is worth stocking up with popcorn.

Last week has pleased with the arrangement between Merkel and Macron on the creation of the general budget of the EU and change of the agreement on immigration. Earlier Angela didn't allow the creation of a fund for investment into EU countries with the insufficient growth of the economy, but the cabinet crisis in Italy has forced to look for a compromise. The sums and the principles of distribution of money will be defined until the end of the current year, and in general, the budget has to be created in 2021, after elections to European Parliament.

At the EU summit on 28-29 June questions of immigration and reforms of the EU, a trade war with Trump and need of any progress on the Brexit will be the most relevant though still there are no noteworthy offers from Britain.

A fight concerning migrants in the ruling coalition of Germany between parties of CDU of Merkel and CSU of Zeekhofer has been postponed for two weeks during which Merkel has undertaken to reach at least a preliminary solution at the level of the EU. If the decision of the summit doesn't arrange CSU party, then on 1 July it can leave the block with Merkel that will lead to early elections in September. Listen carefully: comments of activists of CSU on the course of negotiations on migration at the EU summits will prompt in what side it is worth expecting a gap for euro on 2 July.

After the next series of threats in Trump twitter and mutual bombings of duties at the end of the week the hope for the renewal of trade negotiations of the USA-China has appeared: the initiative of Beijing was supported by Mnuchin and the head of the National Economic Council Larry Kudlow.

Trump continues to frighten by duties in the «$200 billion + $200 billion» format: the Chinese export to the USA for $500 billion – an excellent political target in comparison with $130 billion the American export. The Chinese GDP can lose growth rate from 6,8% to 6,2%, and depreciation of yuan in domestic market can reach 5%. Compulsory devaluation will cause sharp capital outflow and a new wave of sales of treasury bonds of the USA, but Beijing doesn't use this factor yet.

In the short term OPEC can benefit from a trade game of Trump: so far China increases import of the American crude oil. But if Beijing responds to actions of Washington with 25% tariffs for import of black gold from the USA, then there will be an opportunity for OPEC to squeeze on the Chinese market.

On Friday reciprocal European duties on the American goods of €2,8 billion have taken effect that has caused new Trump`s threats to raise tariffs for a car of EU countries for 20%, and prior to intermediate congressional elections (to somehow improve the rating of Republicans!). This subject is very painful for Germany. The German ambassador on Wednesday has submitted to the USA the offer according to which suggests leveling all duties on a car of both parties − it is the only concession to which the EU is ready to go in the developing trade war.

At the same time, the increasing discontent in the U. S. Congress can generate the ban on the increase in the customs duties by the president within an article about national security. But apparently, Trump doesn't suspect about such option of a succession of events.

The pound has unexpectedly got support from BOE meeting: the chief economist Haldeyn has joined hawks to McCafferty and Sanders, has supported an increase in a rate at the current meeting. Carney has declared the beginning of the reduction of balance after achievement of a level of a rate of 1,5% against the previous forecasts in 2%. The general tone of comments indicates an increase in a rate at a meeting in August on condition of at least rather positive economic data. But steady growth of pound is impossible without progress on Brexit and shouldn't expect a break at the EU summit. The current week pay attention to final data on GDP of Britain in 1 quarter.

China and India have threatened OPEC that they will begin to buy more oil from the USA with the purpose to deprive of OPEC of domination in the Asian markets, most likely, it became the reason of taking measures to the reduction of price. The growth of production by 1 million barrels will be the result of the Friday decision, but actually, it is expected no more than 600K-700K. Personal quotas of the countries weren't reconsidered; the Saturday meeting of OPEK+ out of OPEC was optimistical, is stated that the current decision can be modified in September; the next summit will take place on 3-4 December on which Russia can join OPEC as the observer.

The current week has to pass in an active flat from which exit is expected not earlier than July 2. Inflation of consumer expenses and GDP of the USA in 1 quarter and also given on the sector of construction will be a specification regarding the USA; regarding the EU we pay attention to the growth of inflation in June and the IFO index of Germany. The forum of the ECB turned out colorless, more interesting were comments on trade and their subsequent denial by the head of the Federal Reserve. On Wednesday-Thursday the intermediate meeting of the ECB will take place, passing the decision on access of Greece to the QE program in case of approval of the IMF of the end of the aid program is planned. Draghi will participate in the summit on 28-29 June, but comments to the press aren't expected.

It is worth listening to comments of members of the ECB after the publication of the report on the growth of inflation of the EU. 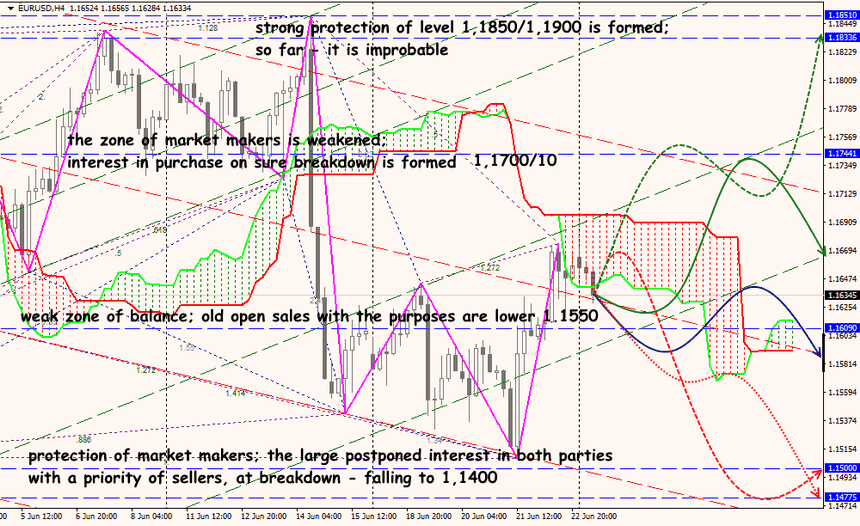 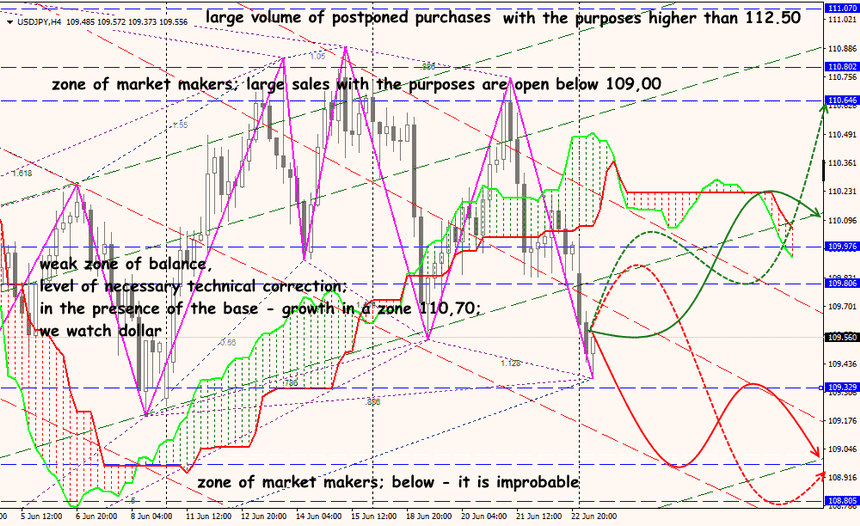