Shock therapy or painful tests from the ECB

Heads of the Central Banks have managed to turn quiet week into the detective story: Draghi recognized the growth of the economy, Carney agrees to toughening, and Poloz considers low percentage effective; cancellation of Obamacare is postponed again; the stock markets of the USA and Europe have finished week the maximum decrease.

Judging by how the head of the ECB carefully plans the performances, Draghi has decided «to probe» mood of the markets on Tuesday by the unexpectedly «hawk» rhetoric, but the test result has unpleasantly surprised. Statements for possible correction of policy with negative interest rates and mass purchases of bonds have been apprehended as a concession to Germany which demands that the ECB has begun to reduce the volume of buying up of assets. Not the fact evroQE (it is expected since January), and shift announcement time became a problem for the markets. Most banks have changed forecasts and now are sure of the beginning of the reduction of QE at a meeting on September 7.

Colleagues from the ECB had to make additional explanations, trying to convince the markets that externally «hawk» statement superMario is just a search of balance between the growth of the economy of the Eurozone and need of soft policy of the ECB for the achievement of goals on inflation. Intentions of the Central Bank to begin correction of policy «later» are recommended to be perceived not as a message to action and as a factor of constant control of the development of the situation in the Eurozone and the world.

Draghi at a forum of the ECB didn't comment on the reaction of the market to the performance, and EUR/USD, having convinced of lack of a negative, has kept growth especially as data on the growth of inflation in Germany appeared above the forecast. On Wednesday «leakage of the insider» through Bloomberg in the form of comments of three anonymous members of the committee, that the markets incorrectly interpreted Draghi's performance, has been in addition organized.

One more shock for the markets was the performance of Carney who not so long ago rigidly raised a question of the low growth of a salary, and at a forum of the ECB declares that some removal of a monetary and credit incentive becomes necessary. On this background GBP/USD has cleared the bar at 1.30 in a week without a loss. The local victory over Labourists and preservation of the post by Theresa May became one more strongly positive for pound. Current week reports of PMI will be important for support of a bull tendency.

In process of understanding by investors of the fact of near «withdrawal» of cheap money from the market, share assets promptly fall. Fixation of profit on sales of state treasury bills of Germany has led to local euro depreciation, but strong data of China together with the restoration of the oil prices have supported dollar on the closing of the week.

Except for dollar, it was interesting to watch yen which could return a part of losses, despite the sharp growth of profitability of bonds. The yen has become stronger just after data on the rate of inflation in the country, but small growth is still far from the target level of 2%. Inflation − the basic indicator of the efficiency of Abe`s cabinet and the Japanese regulator almost has no other options, except extremely soft monetary policy. If BOJ shows at least weak signs of change towards more hard line – it is worth waiting for essential correction of yen on increase. Large-scale liquidation of large options and positions of institutional investors also increases chances of yen of strengthening as already several months considerable volumes of savings were brought out of Japan in search of higher profitability.

It is impossible to exclude growth of euro before the summit of the G20 (on July 7-8). The main subject of mutual negotiations: protectionism of the USA and future trade agreements. The main fighters – Merkel and Trump: Donald prepares increase in duties on steel export or the ban on export by some countries of the G20, and most of all Germany will suffer from it. In this case, the peace is improbable, Merkel prepares for elections in September, and Trump – for intermediate congressional elections of the USA in 2018. If Trump declares about introductions of a tax or the ban on export of the German cars again, Euro will fail. Besides, Trump's contacts with leaders of China can become a source of the new conflict: America is dissatisfied with actions of China concerning North Korea, and, therefore, the rhetoric about the need for trade sanctions is quite urgent.

Trump openly neglects opinion of advisers with Wall Street and surely moves in the way of a global trade war, first of all, with China. Canada, Mexico, Germany and Great Britain can become the following victims. In spite of the fact that neither Pence nor Jared Kushner hasn't declared a certain position, a question of the imposing of the import duties (up to 20%) on basic industrial goods may be considered almost solved.

Extension of the vote in the Congress of the USA on health care reform for the period after vacation, without accurate indication of date, became serious trouble for dollar. Chances of acceptance of reform remain high, but delaying of the decision will lead to postponement of acceptance of tax reform for 2018, and it, except personal discontent of the president, can provoke the descending correction in the stock market of the USA approximately to 10% taking into account intention of FRS about the beginning of reduction of the balance.

Last week Trump announced new power policy which main objective − strengthening of the influence of the USA in global scales. Expansion of export for the Asian markets is planned, not only oil, but also coal, and also cancellation of restriction for the credits for foreign coal projects, the revival of a sector of nuclear power. Large-scale power plans of the USA weren't noted on a current rate of oil.

Tuesday − the Independence Day of the USA that means the thin market, on this background also retails of Australia and the RBA protocols are published.

The protocol of FRS of June 14 should be expected more pigeon in comparison with Yellen whose task included a justification of increase in a rate without of sufficient reasons. On Friday at 16.00 UTC FRS will publish the two-year report before Yellen's performance before the Congress of the USA on July 12.

On NFP we pay the main attention to dynamics of the unemployment rate and to the growth of salaries. The dollar turn is possible when saving unemployment rate not higher than 4,4% on condition of the significant growth in salaries not below 2,8%.

Except the next NFP, current week the main attention will be riveted on the FOMC protocol, statistics of business activity, and also Carney's comments after he unexpectedly changed the judgement concerning increase in an interest rate.

On Wednesday − the intermediate meeting of the European Central Bank, we wait for a new portion of the insider in media, besides, we read attentively protocols of the ECB on Thursday regarding possible hints on decreasing of incentives. 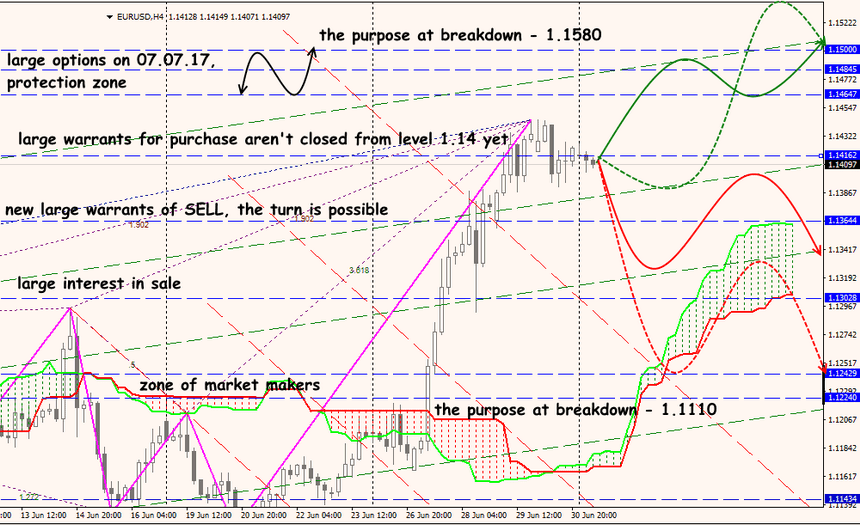 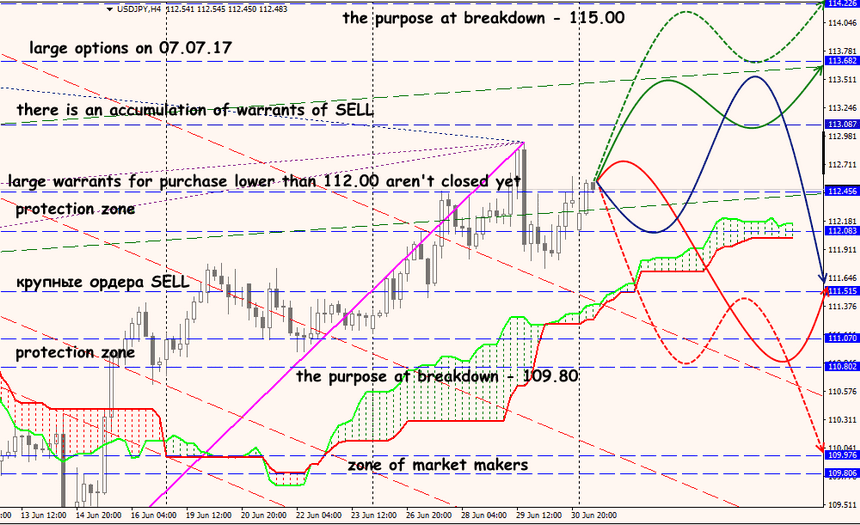