Results of the first quarter: there is a lot of events, not much use

Trade wars in the center of attention; progress in the relations with DPRK is positive for the markets.

Despite weakening of the bull market, investors didn't hurry to transfer the funds to USD, instead, they bought euro and pound (including in cross with yen), being afraid of the current uncertainty in the policy of the USA. The yen which has added more than 5% against the dollar was the most active; political scandal with the family of the Prime Minister is almost fulfilled by the market. The statistical data which have released in the morning on 30 March were contradictory, plans of the government of Abe that demand for workers will lead to increase in inflation and acceleration of growth rates, haven't come true yet. We pay attention to the statistics block in the morning on Friday: index of the leading indicators and wage level.

Last week growth of dollar was promoted by fixation of profit on the closing of month and quarter. Thanks to news from the Korean-Chinese region the US shares haven't continued the sale after sharp falling on Tuesday, despite the weakness of the Asian market.

Xi Jinping and Kim Jong-un's photoshoot – the excellent visual answer to the fighting slogans of Trump though the visit of the North Korean dictator to China increases the probability of the conclusion of the nuclear agreement with DPRK. It can thoroughly support Trump's rating before intermediate congressional elections of the USA.

At the same time, discussion with North Korea of regional trade issues considerably reduces possible complications in the Asian-American trade war. After information that the USA is ready to bilateral negotiations with China, the chance of cancellation (or a delay) the announced trade sanctions considerably increases, and the appetite to risk became more active in the markets. Official PMI of China have left better than the forecast, the remains of statistics will be released a current week and since Thursday the country will go for the weekend.

Formation of the government coalition of Italy enters a new phase. First «rumors» about possible options of the coalition will be received soon, the president Mattarella will begin consultations with leaders of parties of parliament on 4 April. In general, negotiations are expected long, the most negative option for euro is the coalition of parties «5 stars» and North League; the consent of Democrats to the coalition government in any structure can be considered as a moderate positive.

The last American economic reports are perceived by the market ambiguously. March NFP is of particular importance for the final understanding of a possibility of toughening of the rhetoric of FRS prior to a June meeting. For the best understanding, it is necessary to trace employment components as a part of the ISM indexes and the ADP report. If the high rate of working hiring with the sharp falling of unemployment rate and growth of salaries remains, then overheating of labor market can be proven. If the growth of salaries continues to decrease, then the yield on state treasury bills of the USA will fall, and together with them and dollar.

Planned performances of members of the ECB aren't expected, but in case of a growth of basic inflation, active comments can appear. The speech of the head of the Federal Reserve Powell on Friday «with economic forecasts» is perceived with some bewilderment: it was supposed that FRS has traditionally submitted all the new forecasts on March 21. Most likely, Powell has received some «parting word» personally from Trump and will try to intensify the stock market now.

Trump has filled up the team with two officials, active opponents of Iran that has lifted a wave of speculation on an exit of the USA from the nuclear agreement with the western countries and the repeated imposition of sanctions with the purpose to reduce the volume of the Iranian raw materials in the market. The tension in the Middle East has amplified after Saudis have intercepted the ballistic missiles launched by the Yemen insurgents. Pressure from the slate companies of the USA remains the main threat for efforts of OPEC especially as some participants suggest to prolong agreements for reduction of volumes of production up to the middle of the next year.

In March all events — negotiations on Brexit, macroeconomic data and the statement of BOE − were bull for pound. Before an official exit from the EU (officially − at 11:00 on the London time 29.03.19) is a year, but the majority of questions are still far from coordination. Davies and Barnier announced so-called «agreement» for a transition period, but it is a rather poorly positive advance than the real result of negotiations.

At the moment in the preliminary agreement are recorded the sum of compensation which London has to pay (₤37 billion or $52.29 billion) and the equal rights of the citizens of the EU living in Great Britain. Discussion of basic disagreements is postponed, at least, until the next EU summit. The idea to keep access to the market of the EU on previous conditions hasn't received support at the ECB and European Commission so far.

While leaders of the EU bargain, banks of Britain and financial groups move the branches to the continent. Any real decision is possible only after the solution of questions on the border with Ireland. Surely we pay attention to PMI of the industry and services of Britain which will be published on Tuesday and Thursday respectively.

In general the next three days the markets have to be rather quiet, except for the next messages of Trump on Twitter. About the Eurozone, it is necessary to monitor inflation for March and also final data of PMI of the industry and services. Neither FRS, nor BOE meetings aren't held in April, BOJ and ECB meetings have formal character, interest submits only the report on monetary policy of the Bank of Canada. 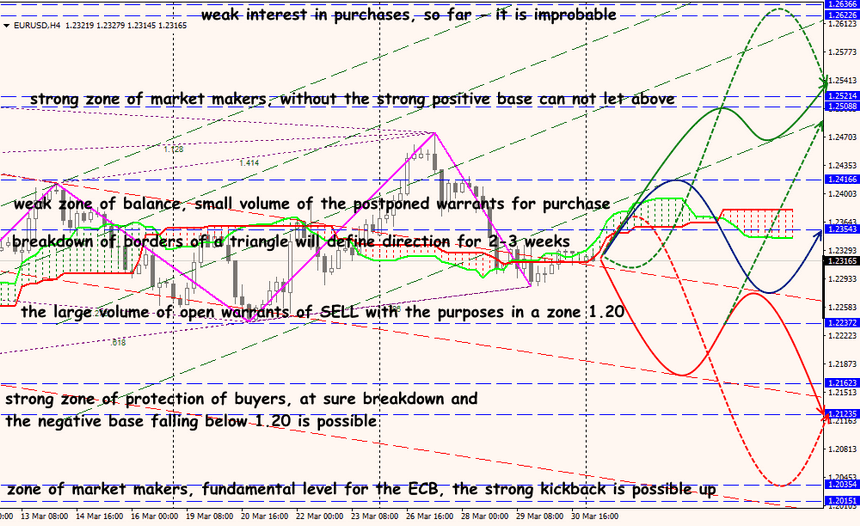 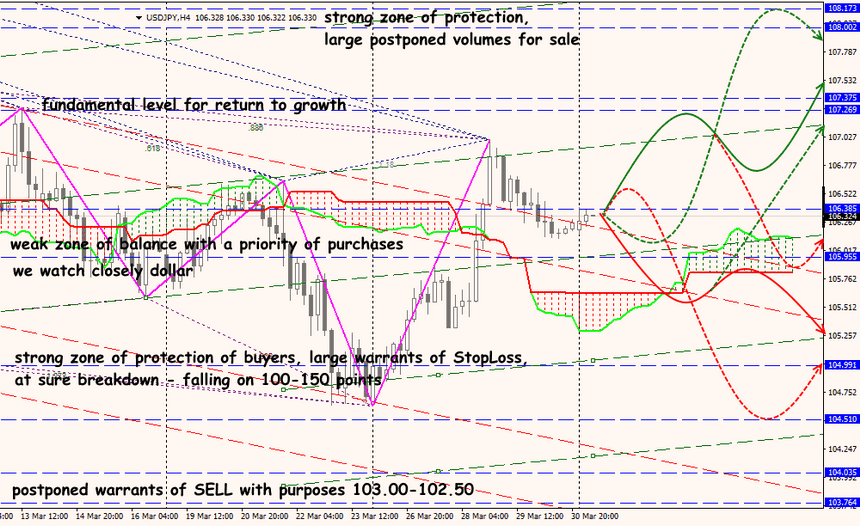