Results of 2019: directors and viewers

2019 closes on positive for almost all markets. Alas, the holiday will end soon, since all the factors that improved the mood of investors have already been exhausted.

The EU in the tariff war with the United States intends to drag out time until spring. Euro-asset volatility is underestimated, and risk-related assets are too expensive. The loss of investor interest in US stocks amid a slowdown in the US economy, lack of support from the Fed and overbought S & P500 will deploy capital flows from the New to the Old World.

The ECB's policy is unchanged, the last stimulus package will not be reviewed, Lagarde's rhetoric confirms the continuity with Draghi. But:

The USA does not abandon attempts to switch Europe to American liquefied gas. Toward the close of the year, Trump arrived with the Pentagon budget, threatening Nord Stream-2 companies with the seizure of property in the United States and the ban on transactions in dollars. The Swiss company Allseas has already suspended pipe laying and removed equipment from the construction area. European business is very concerned (Germany was the most affected).

The ostentatious optimism of Lagarde is not supported by current macro statistics. The last block of data showed a slowdown in production activity, as well as a decrease in inflationary pressure and consumer confidence. Risks from Brexit will not be canceled this year. Analysts' consensus forecast is at $ 1.16 by the end of 2020. The forecast for the first quarter is moderately negative. 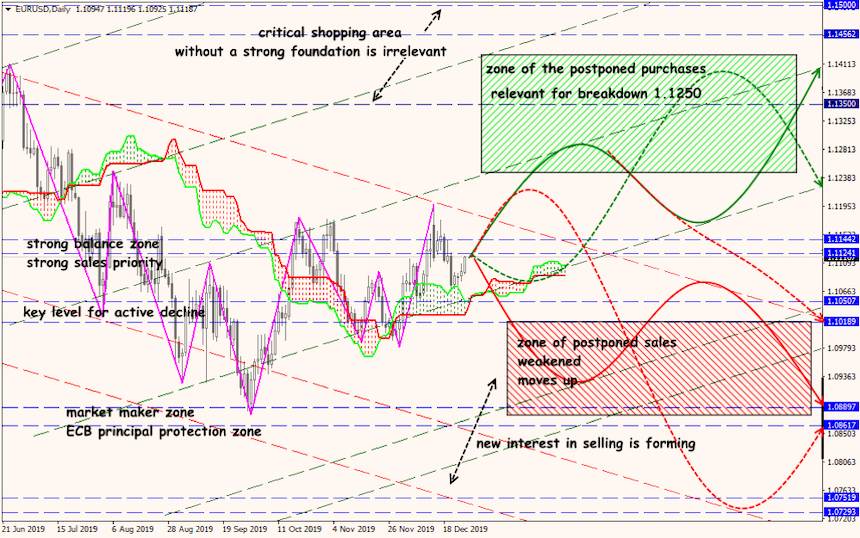 The three-year divorce saga got a chance: the new parliament ratified Johnson's Brexit agreement. The current version of the document will allow London to finally leave the EU in January 2020, although the prime minister’s aggressive speech revived fears of a tough and disorganized exit option. The committees of the House of Commons will study the project in early January before it takes the form of law. After that, Brexit should be held on January 31. The Prime Minister deprived deputies of the opportunity to extend the transition period − this is no longer in the new version of WAB.

Both political and trade experts do not believe that a full-fledged trade transaction can be completed in less than a year, especially since Johnson's main goal is to leave a formal minimum of ties between the Kingdom and the EU. This means that the UK may by default withdraw from an agreement with the EU in favour of WTO rules. In fact, this is the same “hard” scenario, only without the right to cancel. We remind you: the split of the EU is one of Trump's strategic goals, and therefore, after the divorce, he offers London super-favourable terms in the field of trade.

At the end of the year, the young reformers were also defeated: the head of the BOE was 60-year-old Andrew Bailey, known for his conservative pedantry and full support for the policies of the new prime minister.

The pound worked out all speculative growth, there are no fresh volumes to buy. The outlook for the coming quarter is moderately positive.

If in 2018 USDX grew by 4%, then in 2019 it is unlikely to reach + 2%. The dollar has lost such trump cards as an aggressive monetary restriction by the Fed and the acceleration of the American economy to almost 3% under the influence of a large-scale fiscal stimulus. However, the weakness of competing currencies, a reduction in the foreign trade deficit and the S & P500 rally allow him to feel confident.

The impeachment will be delayed by the Democrats so that the topic with the investigation of Trump's activities and the accusations against him will be in the focus of attention for as long as possible. Also, it is planned to conduct a full Senate investigation with the summoning and interrogation of new witnesses. Theoretically, the Senate may now be postponed and postponed until at least the election.

The US Senate voted in favour of two key spending laws for the fiscal year 2020, which will provide $ 1.4 trillion government until September 2020. The U.S. House of Representatives also approved the USMCA trade deal, which is now being approved by the Senate. Related markets see this as a medium-term positive.

Contrary to economic logic, the Federal Reserve has become the main ally for those who want to raise rates. The Fed began to inject liquidity into the market back in October at a rate of $ 60 billion per month, in addition, Powell said that if necessary, the Fed could move on to purchase coupon securities. Interest rates on the Fed policy have changed, the trading dynamics of interest rate futures suggests only 69% probability of its decline in 2020.

Over the past two months, a strong yen complete with a confident dollar has made the pair USD / JPY almost motionless. Next year, the dynamics should revive after a change in the balance of power between currencies.

BOJ can adjust its policy to make it more sustainable. The Central Bank keeps interest rates unchanged in an extremely unfavourable global and regional situation, although it has finally recognized the negative trend in output, which has been declining for more than a year. I had to reduce official forecasts. Abe's government fiscal incentives should remove some pressure on statistics.

BOJ has published details of the ETF loan market program from its balance sheet. The regulator bought up securities for many years, which caused a squeeze in liquidity in the ETF market, and now wants to rectify this situation. The first quarter of the transaction will be held on a regular basis, then daily − on request.

The policy of Japanese corporations on the mergers and acquisitions of foreign companies, as well as the excessive appetite of investors for foreign investments, keep the course stably overvalued. Forecasts for the next year are limited to the range 107–112, so the critical zone 113.50 can still be maintained. A new test of zone 100 is possible with a sharp deterioration in US-China trade relations but is most likely in the fall against the backdrop of US elections. 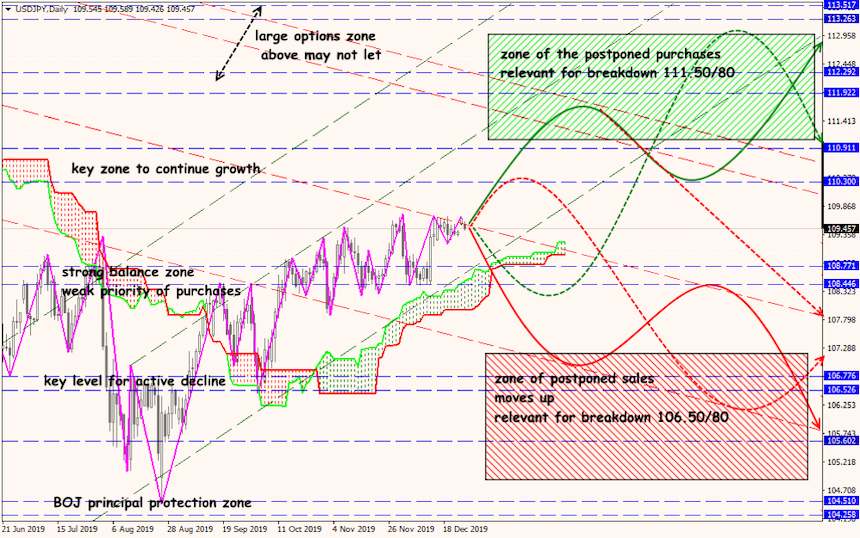 China’s GDP growth is likely to be 6.1% this year, and will not be lower than 6% in 2020, so pessimist expectations are exaggerated. Since January 1, China has reduced import tariffs on a wide range of goods (859 items − from pork to components for smartphones) in the amount of $389 billion, which is about 18% of the total import of 2018. It is stated that this step is part of the strategy to «increase China's openness» to the outside world and has no direct relation to trade negotiations with the United States. The US and China will officially sign the «first phase» agreement in early January, the market will react to this already in fact. The arrangement of volumes at the opening of the year confirms the medium-term positive attitude.

Mnuchin claims that the Chinese side is fully acquainted with it and the deal will not be adjusted. Agreement consists of 9 points that govern relations between China and the United States in the fields of intellectual property, agricultural products, finance, currency, increasing trade, resolving trade disputes and others. Formal applications have been received, but they can be cancelled at any time. We are waiting for official documents.

The «dirty» oil of the Druzhba pipeline became the embarrassment of the year. The scandal ended with nothing but Russia's promises to compensate suppliers for losses (if they confirm with documents), but not more than $15 per barrel. There is no evidence of such compensation.

A new phase of the war for total control over Libyan oil has begun: oil and gas corporations are betting on Haftar. Turkey promised great military support for the GNA with UN support but is losing the political battle.

Saudi Arabia and Kuwait draw up an agreement on a neutral zone along a joint border. Production capacities of 500 thousand barrels per day have not been used for more than 4 years, but now both sides assure that additional barrels will not get to the foreign market. The positive of this information has already been worked out by the market. The results of Iranian President Rouhani’s visit to Japan are closed to the media, but Abe is unlikely to allow resuscitation of purchases of politically toxic Iranian oil.

Oil blackmail lasted all year, so the disaster of 2018 was only compensated by 50%. Despite the nominal success of the Aramco IPO, the $ 70 coveted by the Saudis remain a technical fantasy. There is no acute shortage of raw materials, analysts predict a reduction in industrial stocks by 35-40% − it is no longer profitable to store raw materials to sell more expensive.

The OPEC deal was extended until March, more than 2.1 million barrels of daily supply should disappear from the market and offset the expected growth in demand (according to IEA forecasts). The condensate and other liquid hydrocarbon production are excluded from the reports of the parties to the transaction, although these products will continue to enter the market in the same, if not large, volumes. However, all political attempts to put pressure on prices are declarative − Cartel conspiracy is constantly suffering from poorly predicted factors. Peripheral players enter the market, such as Brazil (up to 6-7 million barrels), or Ghana (up to 400 thousand barrels), while the forecast of growing Asian demand (China) may not be justified. 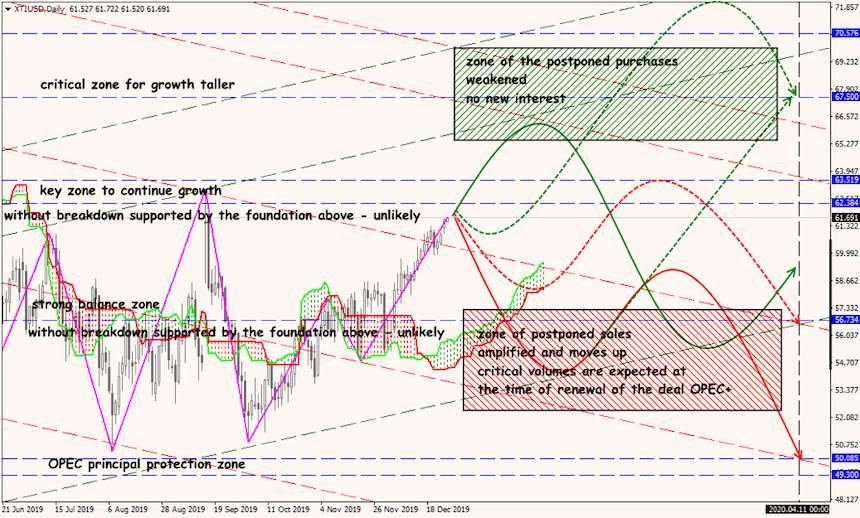 At the beginning of a year, the «thin» market traditionally removes StopLoss on both sides and will decide on the direction only by the end of the next week. We analyze, observe and have a rest.