Parade of Central Banks: a time to gather stones together

Trump's new Iran plan failed;China holds a tough stance in negotiations;Britain is getting used to the new prime minister

The United States refused to regular currency intervention.The ECB kept the stakes, but his American vis-a-vis is more in a forceful mood. The main painful points remain and new solutions to problems have not yet been found.So:

As part of the basic program, the Federal Reserve will decide at a meeting on July 31 to reduce the rate by 0.25%; the main reason is external risks, although there are no statistics for such a decision. The economy grows at average rates, unemployment rate in a zone of historic lows, the stock market of the USA on a maximum, inflation gives signs of growth. But if FRS refuses to reduce a rate now, then escape from risk will be such strong that at a September meeting Powell should lower a rate by 0.50% because of toughening of financial conditions at once.

Export promptly falls, internal consumption remains a major factor of growth, but Democrats will not allow Trump to start new fiscal incentives. If Donald had buried the tomahawk of trade warsand designed at least intermediate agreements with China, the EU, and Japan, the economy would have received a boost from exports and as a result of the dollar falling. But war is the main method of election campaigning and the rejection of it endangers Trump’s second presidential term.

Key moments of the accompanying statement of FRS:

At the upcoming meeting of the new forecasts will not be.Markets are ready for this, a strong reaction is unlikely.If Powell concedes to Trump and decides on a sharp devaluation of the dollar, there is a small chance of lowering the rate by 0.50pp at once, but the markets will not like it very much.

The road to start of a package of incentives at a September meeting is open; need of soft monetary policy during the long period of time as inflation is constantly below the purpose of the ECB is stated. Euro updated minima prior to a press conference.

Draghi obviously did not want to answer a question how unanimous was vote and said that it is difficult to reach unity on points of a wide package of incentives. Mario specified that risk of recession still rather low, but the balance of risks decreases in medium-term prospect, the service sector and constructions grows in the Eurozone, growth of labor market and salaries maintains dynamics of inflation.

As the ECB waits for September statistics, the amount of the forthcoming decrease in a rate, change of limits of purchases of assets, the size and structure of the program of mitigation was not discussed at last meeting. Decrease in a rate in September is almost resolved issue, but several members of the ECB are not sure of efficiency of the new program evroqe. Draghi will hold two more meetings (on September 12 and on October 10) before he resigns. France actively advances Draghi on a post in the IMF (castling with Lagarde), but still unsuccessfully.

If the meeting of FRS does not lead to the strong growth of euro, the decision of the ECB in September will appear below market expectations – we wait for new insiders from the European leaders.

British warships began patrolling the Strait of Hormuz. The new prime minister, Boris Johnson, held the first telephone talks with EU leaders. The requirement to exclude the guarantees of Britain to support the open border with Ireland caused a negative reaction. Juncker was forced to remind you that the current version of the exit agreement will not be adjusted. The EU has not yet taken any steps in the subject of «new negotiations», so all Johnson's attacks are pure speculation.

Merkel and Macron invited Johnson to visit: either these visits will be a breakthrough in the Brexit theme, or misunderstanding of the problem will increase. The likelihood of early parliamentary elections in Britain is actively growing, which will increase the chances of leaving the EU without an agreement.

The meeting of the BOE and PMI industry as a whole will be negative for the pound, as the central bank has long changed its rhetoric due to the slowdown of the British economy. We are waiting for new comments on options for leaving the EU without an agreement, and GDP statistics are most likely lower than the forecast.

Tomorrow the Bank of Japan will publish the decision on an interest rate: correction is not planned, forecasts will be lowered, but real actions will not be. We listen carefully to a press conference, the regulator can give reference points on future monetary policy, most likely, towards further mitigation. We pay attention to data on unemployment for June which, according to the forecast, has to remain at a low level − no more than 2.4% of able-bodied population.

Trump cancelled military strike, but tries to take measures for safety of tankers in the Strait of Hormuz. Formation of the coalition of warships would be quite good option, but so far, except Britain, potential allies separate from this initiative of the USA. Europe does not trust Trump's motives and plans to create conditions for comprehensive regional talks on safety of transportations.

Trump's failures do not mean that Iran will manage to prevent further falling of export of oil – all sanctions remain in force. The West does not seek for war so hijacking of tankers near the Iranian territory will continue. Just the market will get used and will not begin to react to information on this problem: it is much more interesting to large players than the prospect of maintaining surplus of the offer next year.

We remind you that ISM services will be released next week. The July report on the labor market may change the direction of the markets after the Fed meeting or increase the response to his decision. If Powell declares that the Fed rate cut was proactive and for further rate adjustments it is necessary to wait 2-4 months, then the dollar may rise slightly, but with a negative NFP it will be actively sold. The main reaction of the market will be to the number of new jobs and unemployment rates; Pay attention to the revision of data for July. The growth of salaries will have a strong impact only if the output is above 3.4%, but such growth is unlikely.

In addition to NFP, this week we pay attention to the statistics:

Today, the American team of negotiators will arrive in Shanghai, but no major breakthrough is planned. A short-term risk appetite for the short-term risk appetite is possible when setting the date for a return visit to Washington, especially against the background of the Fed rate cut. Pay attention to the Chinese PMI data. The situation can dramatically change during the week, so all the fundamental information is carefully studied. 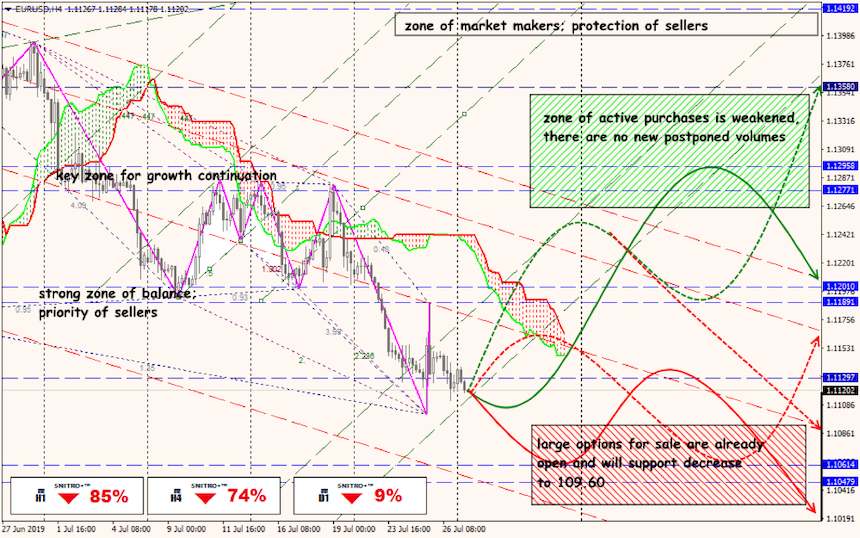 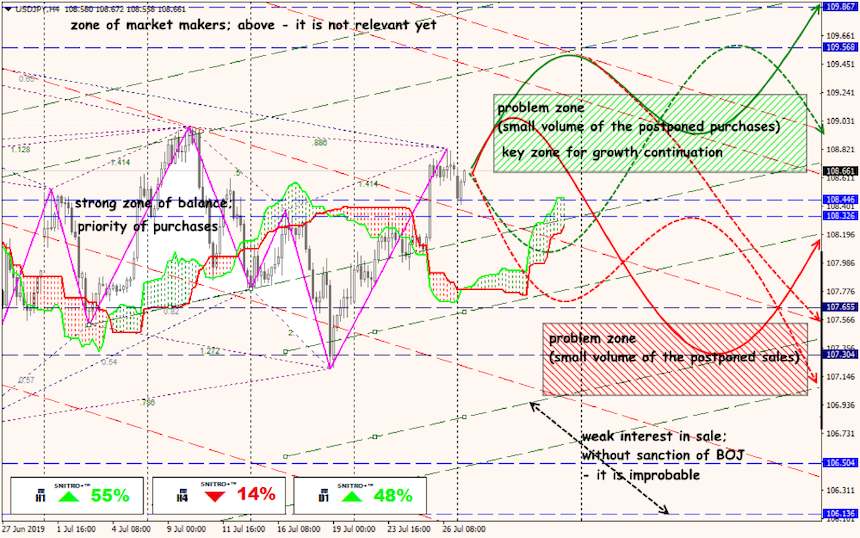