Women's expansion in HR policy of the EU and the fragile truce between the USA and China are not supported by share assets yet. Trump needs essential sag of dollar on all market, but investors prefer to listen and analyze.

Christine Lagarde's candidacy on a post of the head of the ECB became a shock for the local markets as this lady is the acting Managing Director of the International Monetary Fund, and is very effective. Lagarde always highly appreciated to the Draghi`s activity, supported the program euroQE and considers negative rates as the pure benefit for the economy. This year reports of the IMF recommended to the Central Banks to refuse cash to have an opportunity to reduce rates to any negative values at the time of recessions, and to correct fiscal pressure through the devaluation of savings of the population. Lagarde generated the ideas of input of electronic money which will automatically depreciate at a decrease in rates.

The markets began to put decrease in a deposit rate of the ECB by 0.20% with the restart of the QE program, the yield on state treasury bills of the Eurozone failed, euro lost more than 1.5 figures for last week. But taking into account that Lagarde is more politician, than the economist, you should not wait for a global turn of the European monetary policy – Christina will be a worthy follower Mario.

On a post of the head of the IMF, Lagarde closely worked with Trump's administration which insisted on the revival of a role of the IMF as an arbitrator of fair currency policy. Now she can use the understanding of the conflict to displace focus of the ECB from the devaluation of the euro exchange rate to the prevention of the future currency war. Considering good relations Merkel and Lagarde it is possible to expect the achievement of the arrangement on the start of fiscal incentives in the fall that will lead to the growth of the euro. European Parliament should confirm the assignment of Lagarde and as she goes in the French-German packet, it is cannot be excluded that leaders of the EU can change the opinion.

The economy of the USA showed a margin of safety again: June NFP was ideally strong that led to falling of market expectations on a decrease in rates of FRS. The main positive is the growth of the number of new jobs, the growth of unemployment rates occurred against the background of the growth of participation in labor.

It is interesting that all indirect data, PMI, ISM, ADP indicated labor market deceleration that leads to a thought of audit of data in the following report. There are no comments from members of FRS as there is no single solution concerning possible decrease in a rate at a meeting on July 31 though the chance of anticipatory decrease in a rate of 0.25% remains in force. But Trump, as usual, said that in FRS does not know what they doing and the rate should be immediately reduced.

The forthcoming publication of the protocol of FRS of June 19 is in many respects outdated, but the main thing in the text − who are these people who predict a decrease in a rate this year, under what conditions they are ready to lower a rate and when. As Powell's performance before the U. S. Congress will begin 4 hours before the publication of the protocol of FRS, more possibly, there will not be the reactions to the protocol. The regular report of FRS before these performances is published on July 5. Powell is under the unprecedented pressure of the president, Trump`s nominees to the leadership team of FRS and already implemented Trump's people in the structure of FRS demanding decrease in a rate. Speeches of the head of the Federal Reserve before the Congress on July 10 and 11 are fraught with rigid discussions.

The Minister of Defence of Germany Ursula von der Leien has every chance to take the place of the president of the European Commission, therefore, its resolute refusal to remove item on the Irish border from the Brexit agreement destroyed hope for the new agreement with the EU; Johnson as the new British prime minister should not count on concessions. In the nearest future, the aggressive rhetoric from supporters of rigid exit will be strengthened so prospects of the pound are negative.

vCarney on the leaving week persistently finished pound reasonings about a decrease in a rate though earlier refused this step even at rigid Brexit option. The lack of positive prospects on the Brexit against the background of delay of the economy of Britain will continue to press on all assets with the participation of GBP. It is worth paying attention to the block of data of Britain led by GDP on Wednesday.

Mutual American-Chinese promises in Osaka begin to be concretized. China warned that the lack of concessions of the USA on Huawei will lead to refusal of negotiations, and the trade agreement has to level completely retaliatory duties of the USA on import of China.

Trump demands that China prevented any decline in the rate lower than 7 yuans for the dollar even if weaker currency reflects a situation in the market. At the same time, China has no special reasons now to toughen monetary policy for the protection of currency, considering the delay of growth rates of the economy. The American trade negotiators have to arrive in Beijing tomorrow. China publishes the inflationary report in the morning on Wednesday and trade balance on Friday.

And there is a little more news briefly:

Inflation of the prices of consumers will be the main statistics of the USA, regarding the Eurozone – inflation of the prices of consumers in the key countries for June in the final reading. Within the next two weeks, the parade of performances of members of FRS is expected; Draghi will participate in a meeting of the Eurogroup today, but, as a rule, of information practically does not arrive from these meetings. The protocol of the ECB will be published on Thursday and this time it is of interest regarding hints on the structure of the forthcoming packet of incentives. After the intermediate meeting of the ECB on Wednesday insiders are possible. 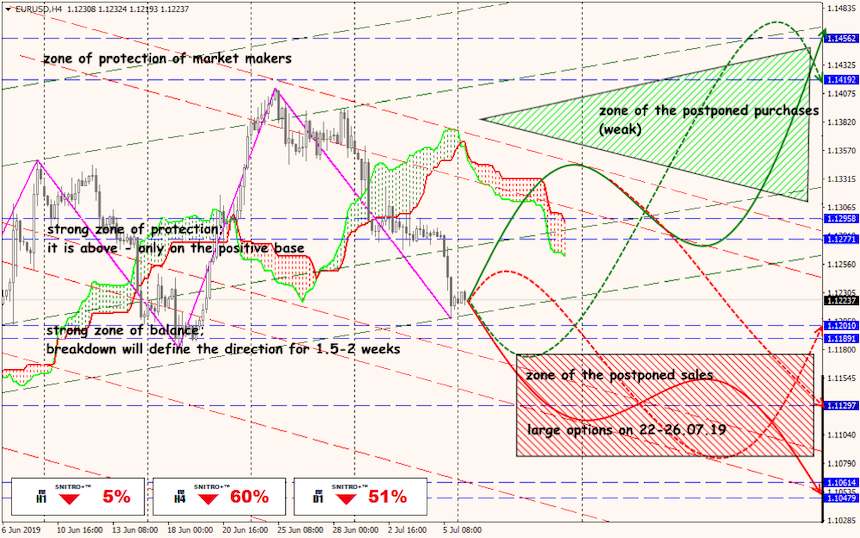 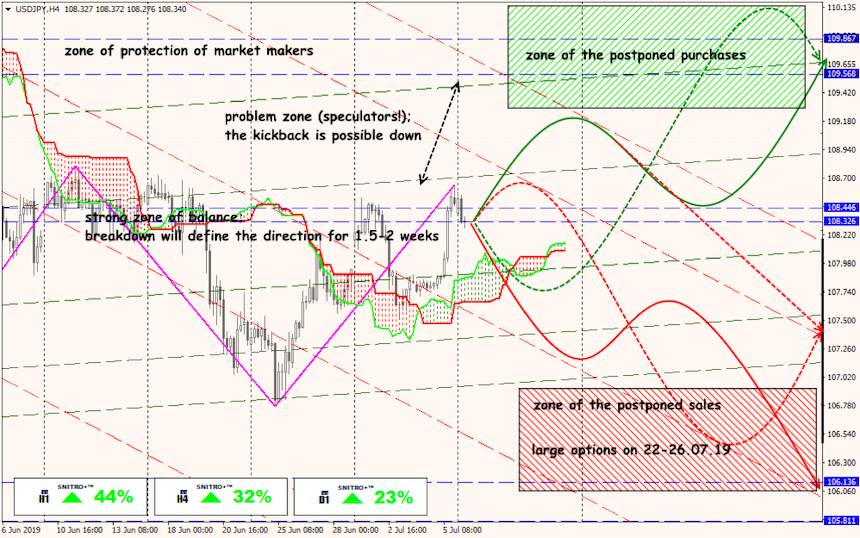