On the agenda − an active storm without destructions

The markets finished the week with the growth of appetite to risk; Trump fell victim to Asian diplomacy; the hurricane «Barry» weakens; Powell practically guaranteed a decrease in a rate of FRS without additional conditions. Prospects of dollar remain negative.

Powell does not expect a confrontation with trade policy of the government; this thesis became the only logical statement of the head of the Federal Reserve against the background of the fact that the index of FRB of New York showed 33% chance of approach of recession in the USA in the next 12 months. The rhetoric concerning inflation and attempt to reduce the value of strong data of NFP against the background of the publication of the prices of consumers in the USA strains investors, but it just means that Gerry already has a majority of votes of members of FRS in a subject of the decrease in rates. If domestic demand falls in the USA, then FRS either will lower a rate by 0.50% in July at once or will lower a rate by 0.25% and announces the next decrease in September.

Trump's administration, to put it mildly, was «surprised» that Treasury`s stocks of means come to an end much quicker, than it was supposed, and the next budget deficit is expected at the beginning of September. Too low tax revenues which grew only by 3% in comparison with last year instead of settlement 6% became the reason. There is no risk of a default yet, the White House urges the Congress to conclude the agreement on expenses of the budget and to increase a debt limit in the next several weeks, but there is no result yet. The lower house of the American parliament goes on July 26 on leave, however, the question of increase in a limit of a national debt still was not even brought up.

The idea that the new head of the ECB will begin to reduce rates and will restart euroQE break against the new report of the IMF on the Eurozone and monetary policy which is obviously prepared taking into account the new status Lagarde. The IMF considers that the euro remains underestimated, it is impossible to reduce rates, and the leading countries of the Eurozone, Germany in particular, are simply obliged to start fiscal incentives for support of the economy. Draghi can manage to lower a deposit rate by 0.1%-0.2%, but in case of the start of a multilevel system of deposit rates, it will be equivalent to the preservation of rates at the current level.

Comments of figures of the European Union on this subject will press on the market up to the next meeting of the ECB on July 25. Considering that Christine Lagarde is not an economist and has no experience of management of the central bank, we pay special attention to comments of the chief economist of the ECB Filip Lane, the former head of the central bank of Ireland.

The pound traditionally is under pressure before the final vote at the election of the Tory party leader and the prime minister of Britain on July 22 though Johnson's victory out of doubts. Adoption of small correction by the parliament of Britain to the situation on Brexit which will not allow Johnson to organize a «rigid» exit from the EU without the consent of parliament looks like a weak positive. If the speaker of the House of Commons agrees, the amendment will be put to the vote today.

The economy of Britain slows down, GDP for 2 quarter is expected negative that have led to extensive reasonings of Carney on possible correction of a rate. Attentively we study the report on the labor market − on Tuesday, on inflation and data retail − on Wednesday. Data above the forecast the pound will in short term push pound up to remove old StopLoss, otherwise, the royal currency will meet the new prime minister on new minima.

Negotiations are still unsuccessful almost on all front: telephone contacts did not designate the date of a personal meeting of representatives again. Toughening of the strategy of Beijing in the form of rejection to buy farmer products of the USA without real concessions on Huawei and also appointment of the minister of trade Zhong Shan to the team of the chief negotiators caused the next shock in the American side.

China imposes sanctions against the USA for sale of a weapon to Taiwan, the USA threatens to arrive similarly for purchase of the Iranian oil by Beijing and this mutual dive only strengthen the conflict. Alas, Trump got to a trap, having configured own Congress against China, and now any «weak» trade agreement will be a serious weapon against the president. At the moment the diplomatic peace with Kim Jong-un interests the American voters more, than trade wars, therefore, Trump for certain concessions is ready to take the help of China in entering the nuclear agreement with the DPRK.

Though Trump suggested Merkel to head trade negotiations between the USA and EU long ago, the European Union just now entrusted this role to the Minister of Economics of Germany. The break in this process can give an impulse to the growth of the euro, but current week it is improbable.

The market had a chance to return to normal trade policy because the time for active trade wars expires: it is time for Trump to stop blackmailing partners with duties as the new falling of the stock market can cost the second term of presidency.

The head of the Federal Reserve plans to talk at 19.00CET tomorrow about a monetary policy within the summit of the Ministries of Finance and heads of the Central Banks of the G7 in France. New comments on the current situation are not planned. Draghi is also present at the summit, but comments for media are not expected.

The beginning of a season of the reporting of the S&P companies can send the stock market of the USA to the next knockout. This week retails data and reports on the sector of construction of the USA will be in the focus of attention; regarding Europe, we pay attention to the ZEW index of Germany and inflation of the prices of consumers for June.

We wait for further decline of the dollar in capital assets, but the range and rate of decrease depends on quality of statistics of the USA. 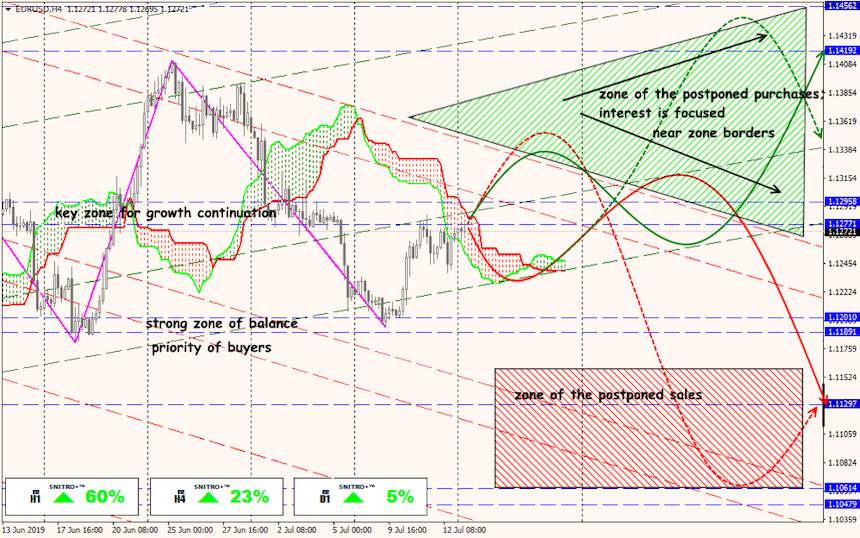 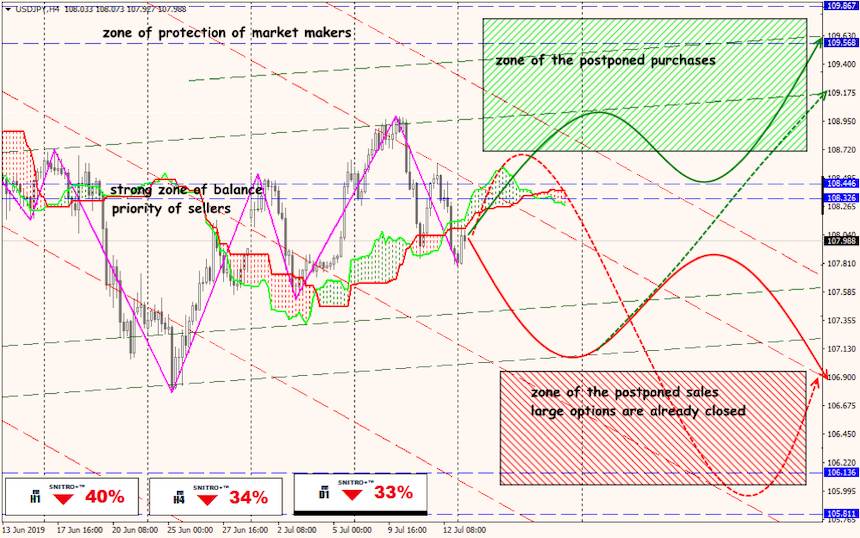