The Wall Street is restored after the next collapse; Abe looks for allies in Beijing; Draghi has managed not to disappoint the markets.

War with China presses on the American economy. We wait for NFP – the last control point before elections in the USA.

Relevant crash in the stock markets – logical result of toughening of monetary policy of FRS and world banks. Powell's statement that FRS plans to raise interest rates above «the neutral level» to prevent overheating of the economy of the USA became the trigger. The large capital wasn't ready to it, and credit crisis of developing markets which have $7,2 trillion dollar debts became almost uncontrollable. In search of an exit from global traps, tension continues to grow in the local conflicts.

Draghi's optimism concerning the growth of economy and inflation has supported euro in short-term. The ECB expects on a positive of labor market again and tries to clean financial crisis of Italy from policy, but this subject has given a gloomy shade of a press conference.

Mario, after all, was necessary to voice a personal opinion on the budgetary conflict between Italy and the European Commission. The ECB doesn't intend to join in search of compromises, Rome can't count on the financial mediation of the Central Bank in settlement of problems yet. There is no confidence in the future of Italy even among members of the ECB and the most pessimistic scenarios are discussed though Draghi assures that the Italian situation isn't infectious for other countries of the Eurozone.

The ECB has confirmed plans to curtail euroQE at the end of 2018 and to keep percentage without changes at least until the end of the next summer. Trade wars of Trump and Brexit remain the main risks for Europe.

S&P agency has confirmed the rating of Italy at the level of BBB, having lowered the forecast from «stable» to «negative» that means a possibility of a downgrade within 24 months though this fact is considered the most positive option. The European Commission has returned the next draft budget for adjustment, the answer is expected till 13 November, but nothing new in the budgetary conflict is expected. Italy won't reconsider key figures. Salvini and Di Maio raise the rating on criticism of the EU, and stronger attacks to Rome can end with the full-scale crisis in the Eurozone.

The EU can undertake nothing decisive concerning Italy yet. The European Commission should wait for spring to compare figures of growth of the economy and the budget deficit of Italy to forecast for 1 quarter and, perhaps, to make the decision on a penalty of Italy for failure to follow the budgetary rules of the EU.

The English problems break traditions: The Queen of the Great Britain Elizabeth II for the first time has publicly spoken regarding forthcoming Brexit. The old woman had to call personally for maintaining traditional moral values and «new partnership» with Europe.

The threat of resignation of May has decreased, but seven ministers of the government of Britain have opposed the compromise agreement with the EU. The risk of an exit of Britain from the EU without agreement remains; the Irish issue isn't resolved, the economy is slowed down. Negotiations with the EU are still suspended, but if May manages to endure today's vote of parliament on the budget of Britain, then the offers of the EU made during the summit of leaders of the Eurozone week before will become principles of the agreement. In case of the ratification by parliament of Britain of the draft budget on 29 October it is possible to expect a pound turn up.

As the risk asset, pound suffers from the pressure of global factors, starting from trade war and finishing with a drop in oil prices. BoE meeting on Thursday will be ordinary, but if the Central Bank revises the forecasts for GDP growth and inflation towards decrease, expectations concerning the increase in a rate will also decrease that will actively play against the pound. Also, data of PMI of the industry of Britain will be published.

Elections in Hessen promise to become the next disappointment for parties of the coalition government and for Merkel personally. The chancellor, though will keep the post until the end of the term, at the moment promptly loses the rating as within the country, as well as in the Eurozone. It will interfere with the adoption of reforms of the Eurozone at the December summit of leaders, and at a party congress in December the CDU party can make the decision on change of the leader. So we listen carefully to all the comments.

NFP remains the only report capable to intensify growth of dollar in case of a victory of Republicans at congressional elections of the USA, but it will be final growth before a long-term turn on falling. This time we won't have all indirect data before the publication NFP − PMI and ISM of services will leave after the report on the labor market. GDP of the USA for the 3rd quarter has confirmed the preservation of a strong impulse of growth due to domestic demand, export remains a weak point of economy, but Trump assures that he works on it. All reports of the USA speak about the delay of growth rates of inflation. Anyway statistical data will be completely considered by investors only after elections.

Trump in an interview of WSJ attacked the policy of FRS again and has even expressed the personal disappointment with the new head of the Federal Reserve. The protectionist policy of Donald has already taken away 1.8% of percent of GDP indicator, and the Federal Reserve System doesn't react to regal criticism and heads for an increase in rates on federal funds.

New promises of the President to reduce taxes for the middle class for 10% right after the intermediate congressional elections of the USA look inappropriate; bookmaker rates indicate 15% chance of maintaining of the majority by Republicans in the lower house. However, the market more than once was mistaken in Trump's relation, history can quite repeat. At the end of the current week, we wait for the serious fixing of profit before the elections on 6 November and, it is more probable that this process will be not in favor of the dollar.

Most likely, BOJ on Wednesday will keep the current monetary policy, including the level of an interest rate and the yield on ten-year bonds at the level of about 0th %. The press conference on the final statement and also comments following the results of Abe's visit to Beijing can put the local pressure on Asian assets.

Reports that the break in negotiations on trade at Trump and Xi Jinping's meeting isn't expected and it doesn't improve mood in the markets. The yuan decreases against the dollar, but at break of a mark 7,0 it is necessary to wait for strong intervention from NBC. We wait for the Chinese PMI on Wednesday and Thursday morning, in case of falling of indicators lower than 50 points new panic in the stock markets is guaranteed. 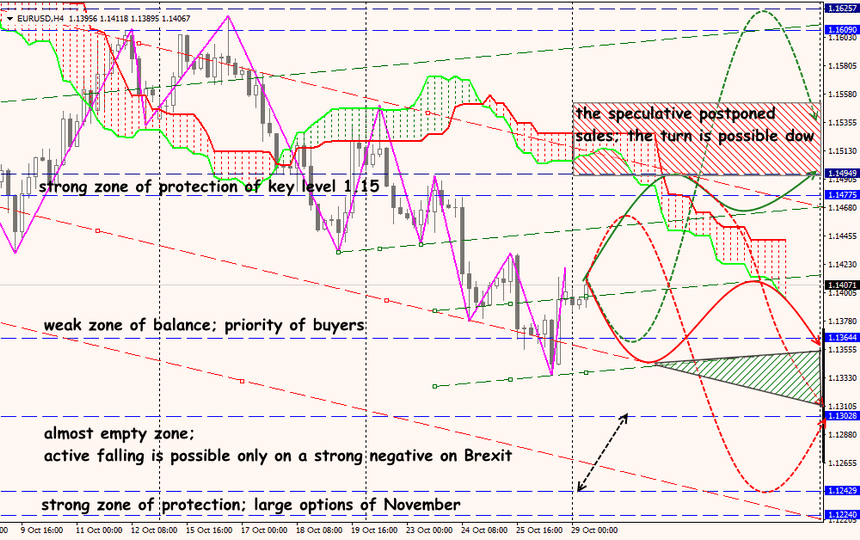 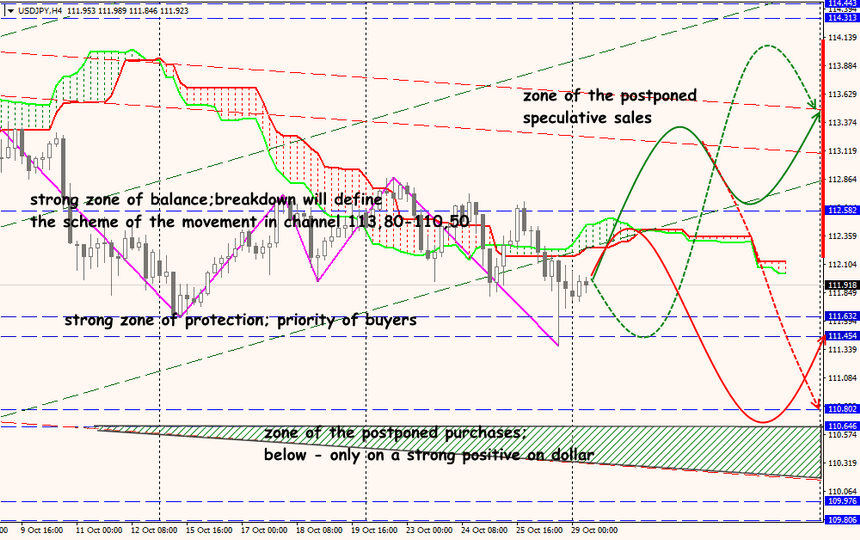