Messages from the front: European migration and active export of problems

The EU has reached the agreement on immigration; Merkel has won one more victory.

Trump is at war with motorcycles, and China increases sale of oil for yuan. Truces aren't relevant yet.

In response to the ultimatum which is put forward to Merkel by partners in ruling coalition and as a result of active work in the night from Thursday to Friday at the EU summit the German project capable to solve a problem of the European migrants for the next decades has «unexpectedly» been approved. Creation of the reception centres of refugees in the EU and North Africa under the direction of the UN and redistribution of migrants to other countries on a voluntary basis is supposed; strict control over secondary migration in the EU and increase in the help of Turkey, Morocco and the states of North Africa is also coordinated to reduce number of those who aspire to Europe.

The German political fraus have also agreed: migration policy of Merkel has been supported by CDU in the person of the secretary general Annegret Crump-Karrenbauer yesterday. The conflicts with Poland, Czech Republic and Hungary which are incorrectly specified in the final document as the countries which have supported this project and also (temporary?) problems with refusal of Egypt to create the migration centre in the territory, have to be settled current week. Details, of course, demand coordination, but euro has already actively fulfilled the positive.

Trump is in the mode of an election campaign long ago: the president has announced preparation for revision of tax reform «by October or earlier» though it is obvious that it is impracticable considering the current load of the budget and quantity of fiscal hawks in the U. S. Congress.

The chance of a discharge in trade war after Trump's promise not to suppress the Chinese investments was completely destroyed by the Trump's adviser Larry Kudlow statement –this is not about any mitigation of positions, the president was again «misunderstood». If Beijing doesn't manage to reach the breakthrough agreement at the last minute, then on July 6 tariffs for import of the Chinese goods for the sum of $34 billion will come into force. The economy of the People's Republic of China has continued to be slowed down against the background of toughening of terms for crediting and trade contradictions. Although indicators of the Chinese production have already suffered negative consequences from increase in duties, China actively devaluates yuan, increases a turn of oil futures in yuan at the Shanghai exchange and prepares for full-scale trade war with the USA. Saturday PMI of China have been released within expectations, China will please with PMI remains on Monday and Wednesday.

The Brexit subject remains the main problem of pound, there is no progress in negotiations and the plan of an exit of Britain from the EU without new trade agreement and, as a result, without granting a transition period is ready by now. The meeting of the adviser for national security of the USA Bolton with the British colleague Mark Sedwill and the conservative deputies has reminded the world of force of secret negotiations and obligations. Bolton has let know that Trump is personally ready to accelerate a commercial transaction with Great Britain after Brexit. Especially as the insider from the EU confirms that the scenario of rigid Brexit is more and more probable, considering weak progress in negotiations and a slurred position of May. Problems are added by transfer of clearing operations to the EU which obviously don't manage to finish till March of the next year. At the same time, judging by the last statistics, the economy has shown a positive impulse in the second quarter, having strengthened expectations of the fact that BOE is ready to raise interest rates in August.

It is a little more news – briefly:

Activization of trade war remains the main factor of the current week, the quality of NFP will only correct the direction of capital flows out of the stock markets. Today is holiday in Canada, and the exchange world of the USA has a rest on 3 and 4July; and only by Friday we will see events which will give the movements in the market.

On Wednesday we read attentively protocols of FRS. Reminder: the accompanying statement and new forecasts from a meeting of FRS on 13 June were very hawk; forecasts for growth of inflation have been raised. Moreover, Larry Kudlow and Powell's current active «consultations» are treated by analytics as attempt of open pressure upon FRS. In the light of the Friday statements of Kudlow, investors first of all will look for in the protocol of FRS the instruction on factors which can lead to delay of rate of increase in rates.

The opinion of the market will depend on economic data. Before the publication NFP there will be all data which will help to get an indirect impression about labour market force (ISM of the industry and services, the report of ADP), but the main reaction of the market will be on growth of salaries. 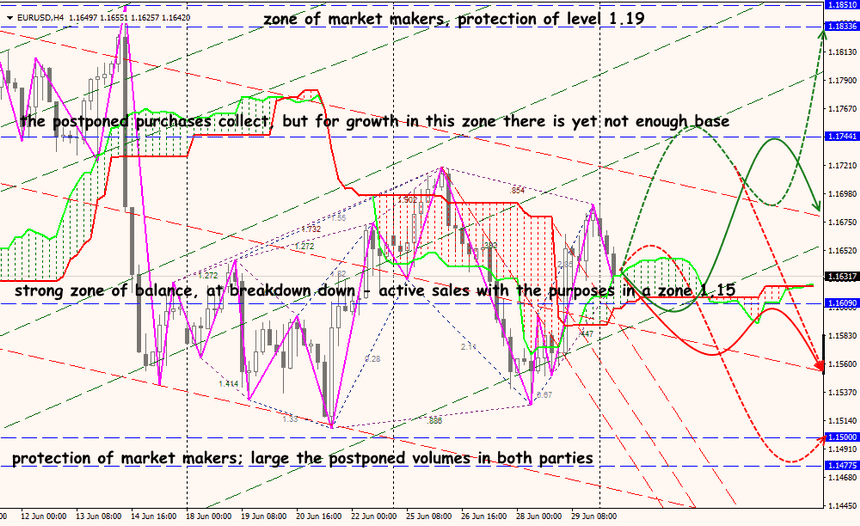 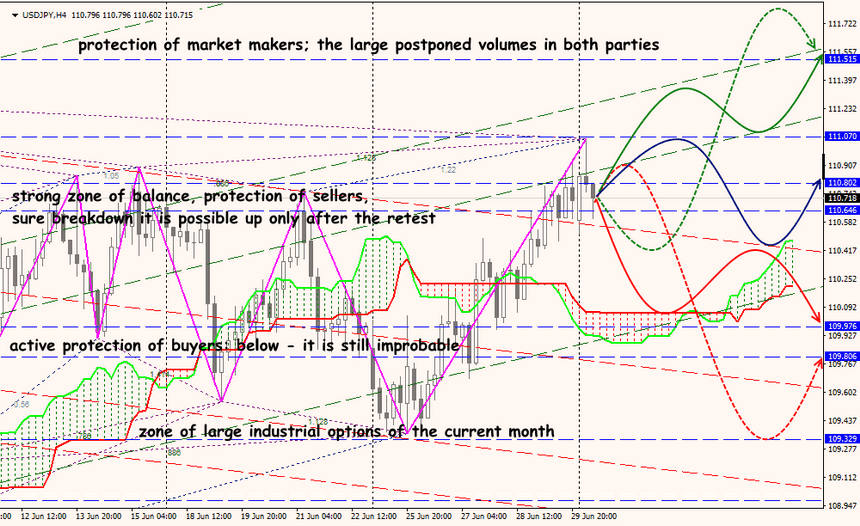