Market at the bottom: cruel a Study in Scarlet

However, the foreign exchange markets have reacted to a situation more wisely and quietly. Those, who have survived, wait for a large-scale correction.

The combined picture of the sharpest fall of the DJ index during the performance of Trump in which he told about «the progress» and «achievements by the American market of historical maxima» became the main video show of the week.

In real, the Dow index endures one of the worst periods in the history, having lost more than 1100 points in a week; and for S&P500 falling became the most large-scale for the last 7 years. The same reasons – fears of growth of interest rates, a surplus of the oil market and populist policy of Trump.

NFP can be considered the catalyst, but supports in the stock market of the USA have been punched before its publication. Start of tax reform against the background of achievement by labor market of full employment provokes inflation growth, and therefore investors have preferred to close the main volume of the hedging positions. As a result, the stock market of the USA has lost all profit since the beginning of the year that there correspond about $1.25 trillion investments.

Though Prime minister Abe and head of BOJ Kuroda have preferred to keep silent about «adverse dynamics of an exchange rate», having limited to statements for need «to maintain price stability», the Asian markets also look shabby: the Shanghai stock index has lost 6%, Hang Seng − 5%, Nikkei and Topix have decreased by 4% and 4.3% respectively.

The collapse of stocks was followed by a pathological price hike on the bond: people in panic changed one papers for others. The general panic has entrained also the oil market (Brent at the level of $64, WTI about $60), the American oil has lost all gain since the beginning of the year.

Is to consider that the new members of FRS treat current volatility of market more carelessly, and the concept «parity of risk» at the moment doesn't work at all, the current correction of stock market obviously doesn't mean completion of the accident. The situation can be considered as a rehearsal before large-scale falling which should be expected in half a year, on forecasts of the closing of QE programs of ECB and BOJ and also elections to the American Congress.

Britain starts preparation of the soil for further increase in an interest rate. The success of pound on a wave of controlled optimism of Carney and increase in forecasts of BOE was short. The decision of European Commission not to give the sector of financial services of EU to London after Brexit has provoked new scandal. The EU wants to introduce special rules, in particular, that during a transition period lawsuits were solved through specially created commissions. It is caused by fears of European officials that if Britain uses reduction in taxes or other methods for obtaining competitive trade advantage, then the European Court of Justice could not manage to react.

In turn, May's government (which, by the way, very much counted on similar manipulations) states that in that case, the EU won't receive money which has been coordinated at the discussion of a divorce. Politicians consider that all reached positive on Brexit will be lost if the parties don't agree upon the matter in next few days.

From more or less strong positive of the week we will note:

Trump will present today the budget for 2019, including the bill on investments into infrastructure (the next essay about what this project will be scale and useful) and expenditures on construction of a wall on the boundary with Mexico.

There are no plan performances of members of FRS, but investors show interest in the protocol of FRS and a speech of the head of the Federal Reserve Powell in the Congress. On 16 February the Ministry of Finance of the USA Mnuchin will address the budgetary committee of the lower house of the Congress – there will be a set of venomous questions on the growth of a national debt and cost of its service.

Members of the ECB will also continue to please the markets with the affected optimism, the speech of the chief economist Praet at a joint conference of the Ministry of Finance of France and the IMF on Thursday can become the most indicative.

Since 15 February China will go to long holidays and will cease to affect the markets. The key day of the current week will be a Wednesday – wait for data on the growth of inflation of the prices of consumers of the USA in January (on a negative it is impossible to exclude one more wave of panic).

On pound, it is interesting the report on inflation on Tuesday and retails on Friday. If BOE plans to raise rates, then it is necessary to see the growth of retail indicators of the indicator that can cause additional volatility.

Also, across the USA, it is necessary to monitor retails, the production index of FRB of Philadelphia; on the eurozone − inflation of Germany and GDP of EU countries for the 4th quarter and also trade balance of EU. 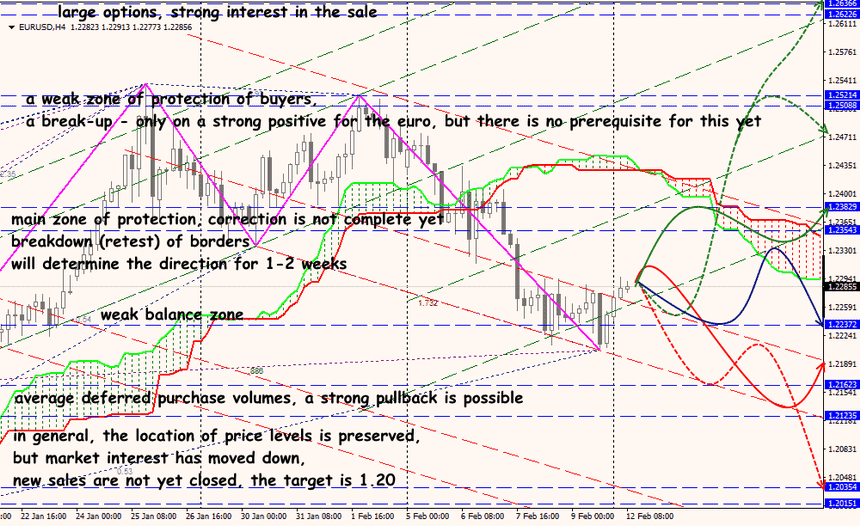 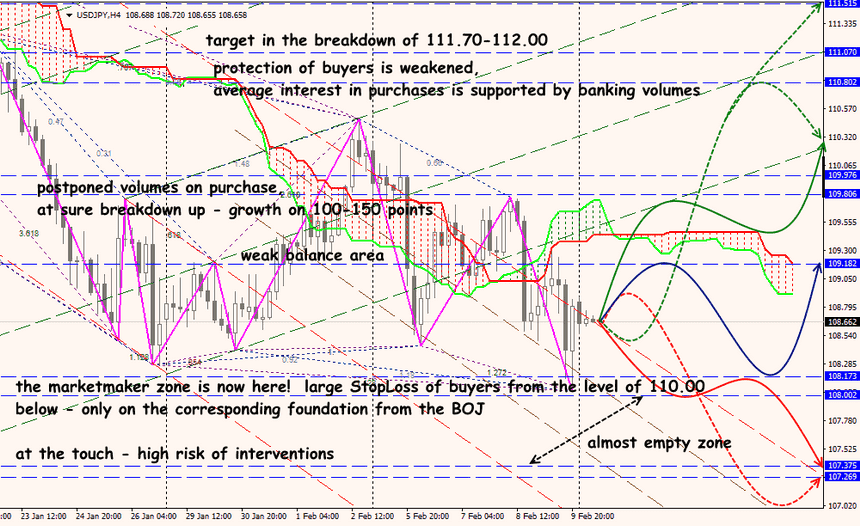