Market & Dollar: the patient is alive, but there are no tools to treat him

Loss of hope for the start of Trump`s incentives has resulted in extreme values of basic assets.

Draghi earns the capital for the ECB, Japan keeps rates; trade negotiations with hysterics and threats of the USA at the full tranquility of China.

Attempts, at least, to correct Obamacare have completely failed in the senate in the evening on Monday. And whatever way they try to shift the blame for this fact on suddenly sick John McCain which voice «wasn't enough» for Republicans − a result is: Trump hasn't won any legislative fight within 6 months in power. On July 19 Trump has collected Republican senators in the White House and has urged them to agree. New procedural vote on cancellation of ObamaCare is previously appointed to Tuesday. If voices are enough, hearings with amending will begin.

These days Republicans control all branches of the power − the White House, the Capitol and the Supreme Court, therefore, it is too risky for them to vote for cancellation of the medical program, without having the full plan for its replacement and a clear understanding where $940 billion saved will be directed. So it is possible to lose congressional elections in the 2018th.

The U. S. Congress raised the highest limit of a national debt of 78 times for the last 57 years, but now it won't be a technical solution anymore. Judging by latest scandals and misunderstanding in the course of the vote on ObamaCare, concerning a debt active political «auction» up to the critical term is coming so for fans of volatility September can be very profitable.

The European currencies keep to receive benefit from a new stage of investigation concerning the U.S. President especially as ranks of his support quickly thin − Trump's group on communications with media is left by Mark Corallo, one of the most professional lawyers. The special prosecutor Mueller expands the investigation of Trump`s financial activity (in particular, acquisition of some real estate objects and conditions of competitions «Miss Universe»), and Trump's team actively looks for a compromising evidence on investigators from a group of the investigation, attempting to demand resignation because of the conflict of interests. Political scientists consider that any dismissal of Mueller will be apprehended as recognition of fault.

Within the first step in reforming the tax law of the USA, Republicans have published the budget for 2018 with expenses on $4 trillion which will become a new point of the conflict as a reduction in taxes for business and natural persons will develop into a decrease in grants for the poor.

Acceptance of tax reform becomes even more problematic, especially regarding a boundary tax – there is nothing can be done without the support of Democrats, but Trump isn't ready to agree. So far the market prefers to speculate on any news with Trump's participation, but at preservation of the current situation, dollar will remain under pressure for a long time.

The week was landmark for the ECB. For the first time, the total amount of the bonds on balance of the regulator acquired within the CSPP program has exceeded €100 billion (approximately GDP of Kuwait!). And for the last month, the ECB invested about $15 billion in various European companies, having received their bonds in exchange. According to the last report, the balance of the European regulator has exceeded the balance of FRS and now is equal to €4,23 trillion (approximate GDP of Japan) that means that it is the biggest Central Bank of the world.

Draghi brought to the market a large volatility − reaction of euro for information of the ECB is a classical example of market speculation. Politically and technically all signals were unambiguously bear, but Draghi has professionally evaded from the indication of terms of the forthcoming discussion about QE turning, and further skillfully manipulated delights concerning recovery of the eurozone`s economy. They promise not to correct volumes of repayment till December, and all subsequent comments have been devoted to belief in the European growth. Bears stops fulfillment above 1:15 caused the growth of eurocurrency against dollar almost on 1,5 figures and large players have well earned it.

The ECB has released two insiders after the meeting in attempt to break a situation after Draghi: in an hour and a half after completion of a press conference («the decision on the future of the QE program will be made at a meeting in October, but not September»), and on Friday the ECB has reported that December is late and more possibly an October meeting. But the turn of euro didn't happen.

For euro large options in a zone 1.15 will be closed at the end of the current week that will make this level strong support for further growth. Most of the analysts to the next meeting of the ECB on September 7 expect euro exchange rate at the level of 1.20. However too high euro exchange rate negatively affects the value of the stock of the European companies − banks already reduce the forecast for profitability for the 3rd quarter, and investors can decide not favorable to place large assets at stock markets. The movement by 1.18 is inevitable provided that officials of the ECB won't try to weaken currency by the hidden interventions, but high business activity indices will be necessary for achievement 1.20.

Inflation and consumer prices statistics and EUR/GBP rally against the background of the disappointing inflationary data on Britain also supported the growth of euro. The pound also tried to be nervous against the background of Draghi's performance, but in general partial fixing of profit of GBP/USD after a large-scale rally of the last two weeks was the cause of his decrease. The overall picture has almost not changed – analysts predict in the next months the growth of inflation above the target level of 2%, therefore, if there is no next political force majeure, then a way for pound – only up. Besides, support to the pound was given by information that negotiators from the EU and Britain have found some common ground following the results of a full-scale round of negotiations on the Brexit. Britain remains loyal concerning the rights of citizens of the EU in the territory.

The Japanese yen has slightly decreased against the dollar after the announcement of the Bank of Japan of preservation of incentives. Interest rates were left without changes though officials have raised the estimates of economy and forecasts of GDP growth, have reduced expectations concerning inflation this fiscal year from 1,4% to 1,1% and have moved up schedules achievement of the goal concerning inflation in 2% from 2018 fiscal to 2019.

Information background of the week can lead to the essential growth of volatility. The meeting of U.S. FRS on Wednesday is expected «soft», without new economic forecasts and a press conference Yellen. Investors don't wait for any actions from FRS, but meeting time meets coincides the moment of Donald Trump Jr. and Manafort's indications to federal investigators (the beginning at 14:00 UTC), at worst can provoke further falling at stock markets and respectively new minima for a dollar. Among a week Trump's son-in-law Kushner will testimony during the closed hearing.

The main currency pairs haven't gone beyond a marking of last week. The risks for euro are generated not by dollar, but PMI of the eurozone and the German reports of IFO. It is worth to trace GDP of France and Britain for the 2nd quarter, assessment of growth of inflation in France and Germany for July. Concerning USA we pay attention to GDP for the 2nd quarter, PMI and data on the sector of the real estate. If preliminary estimate up to 2,5% is confirmed, the dollar can win back losses slightly. 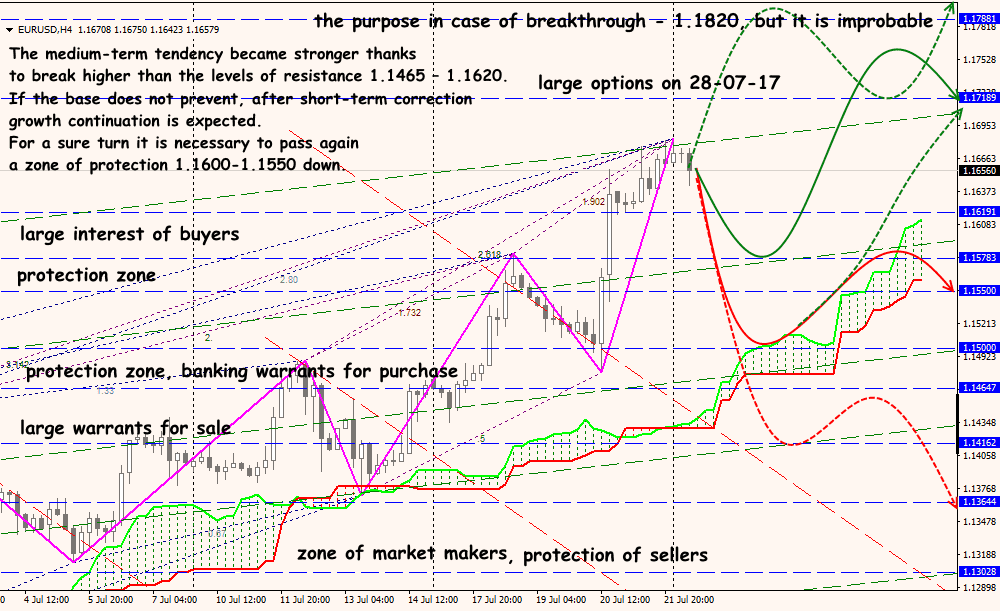 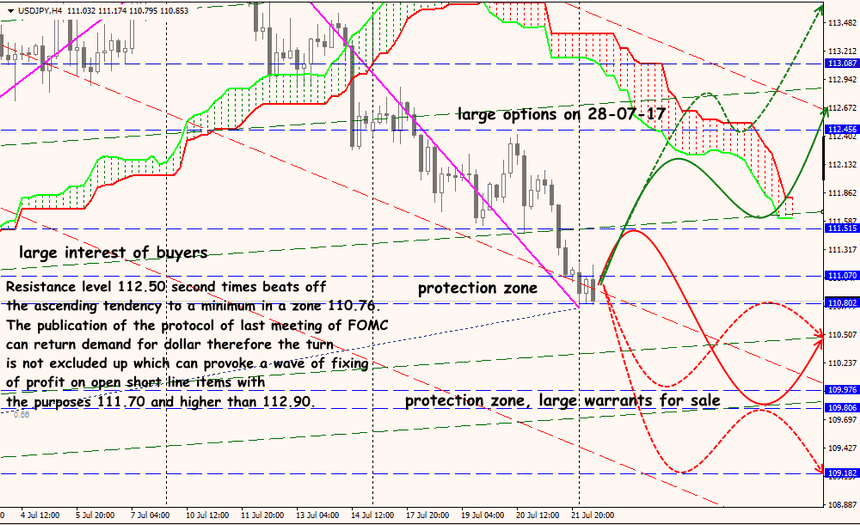