London is ready to stake one’s all, but already loses

A pandemic, a Trump show, another Brexit failure and problem oil − the market does not offer anything new yet. The solution to two key issues depends on telephone conversations.

The downgrade of Britain's global rating by Moody’s agency confirms the complete failure of the foreign and domestic policy of the Johnson government.

As expected, the EU leaders' summit decided that the current progress is not enough to start the final «tunnel» negotiations, the position of the EU does not change. Johnson was, to put it mildly, very upset that, in response to his threat to end the negotiations, EU representatives proposed to continue the discussion in the next 2-3 weeks. Frost said that Britain is ready to leave the EU on Australia's terms on January 1, that is, without an agreement, so the EU negotiating group led by Barnier should not come to London yet.

A telephone conversation between representatives of the parties are scheduled for today; topic − a discussion of conditions for the continuation of negotiations. If the EU agrees to open the final negotiations, the markets will return to positive, the pound will continue to rise, the euro will follow.

Johnson, of course, is bluffing − Britain's economy is falling, the country is on the brink of political disaster: according to recent polls, 58% of the Scottish population is ready to vote for independence. The prime minister could only count on Trump's support in the event of an increase in US duties on EU goods with the granting of special privileges to Britain. Alas, now the chances of Trump winning the election are extremely small, and Biden, of course, will support the interests of the EU.

Another deadline is the EU summit on November 15, although with a positive result there is not enough time to ratify the treaty.

In any case, the «urgent» trade agreement between Britain and the EU will not be complete and the recession in Britain will not be cancelled. Negative BOE rates cannot be avoided, which means that even if an agreement is reached, the growth of the pound against the dollar and euro will be short-term.

The situation with the pre-election ratings of Joe and Donald does not change: all analysts are confident in Biden's leadership with a 10-12% advantage.

Democrats have rejected Trump's $ 1.8 trillion fiscal stimulus offer, although Donnie is willing to raise rates. The presidential administration was unable to provide its version on national testing for coronavirus in time, disagreements on other issues also persist.

Talks between Mnuchin and Pelosi on Saturday recorded little progress on the national testing plan, but the speaker said that in the next 48 hours, all differences need to be resolved and concessions should come from the White House. Nevertheless, Mnuchin left for the Middle East and will return only tomorrow, so key decisions can only be made by telephone.

Democrats may lose interest in concessions following a Senate vote following Trump's Supreme Court nomination (Oct.22), as their attempt to pass a fiscal stimulus package is linked to a desire to prevent the Senate from holding Barrett's appointment.

The Senate will vote Wednesday on a $ 500 million stimulus package, Pelosi is optimistic. Should a miracle happen and an agreement on the fiscal stimulus package is reached, an increase in risk appetite should be expected, but the chance of such a decision being ratified by the Senate is too small.

Despite an oversupply of oil reserves on the market, the balance is recovering faster than forecast. The deteriorating epidemiological situation in the world and a new strict quarantine in the main consumption zones continue to put pressure on prices. There is a chance to restrain active sales by OPEC + rhetoric.

The OPEC + Technical Committee pointed to the risks of a drop in oil demand in connection with the second wave of the coronavirus pandemic, but the emphasis was on the need to comply with quotas and compensate for excess oil production earlier. Market participants are certainly waiting for key information at the December 1 summit, but if the OPEC committee at the October 19 meeting does not give new recommendations, the main benchmarks may lose an additional 1.5-2 figures.

China's GDP data disappointed markets, although industrial output was higher than forecast. UK economic reports are relevant to assessing BOE policy, Bailey will comment on his understanding of the current situation on Thursday.

Fed members continue to demand a fiscal stimulus package from Congress, but they question the effectiveness of new monetary stimulus, including an increase in the size of the QE program. Powell will speak on Monday, but his speech will focus on the prospects for the Fed's digital currency.

Merkel said that the next 10 days are key to slow the rate of growth of coronavirus diseases in Europe, otherwise the German government will have to go on strict quarantine measures for at least 1.5-2 months. Strengthening the quarantine in the pre-Christmas period will lead to a significant slowdown in the Eurozone economy, possibly a decrease in the Eurozone GDP for the 4th quarter in the negative area.

Last week, Lagarde noted that the ECB may adopt new incentives if the inflation target takes longer than planned at the current stage, new incentives do not rule out a rate cut. The ECB during its December meeting will assess and revise the current incentives, taking into account the new economic forecasts. Lady Christine continues to make public statements almost every day (for example, today and Wednesday), however, there is no new information that could affect the euro rate. 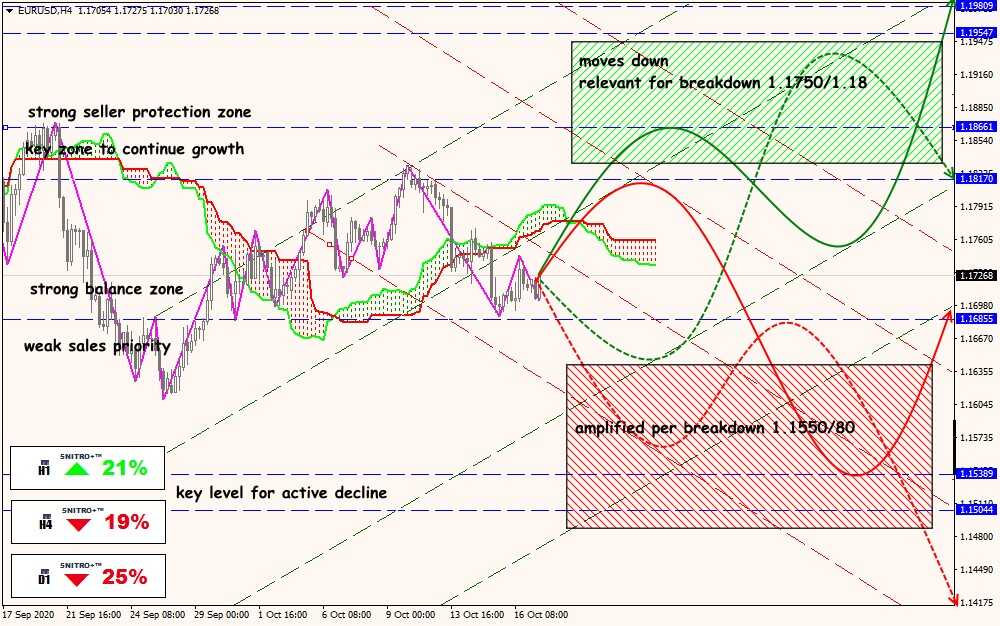 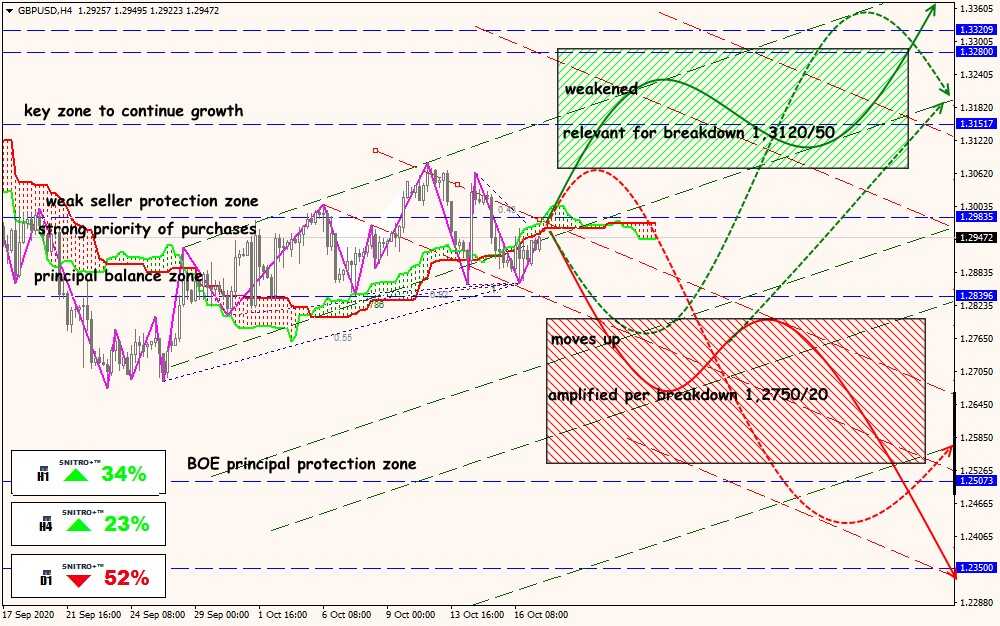 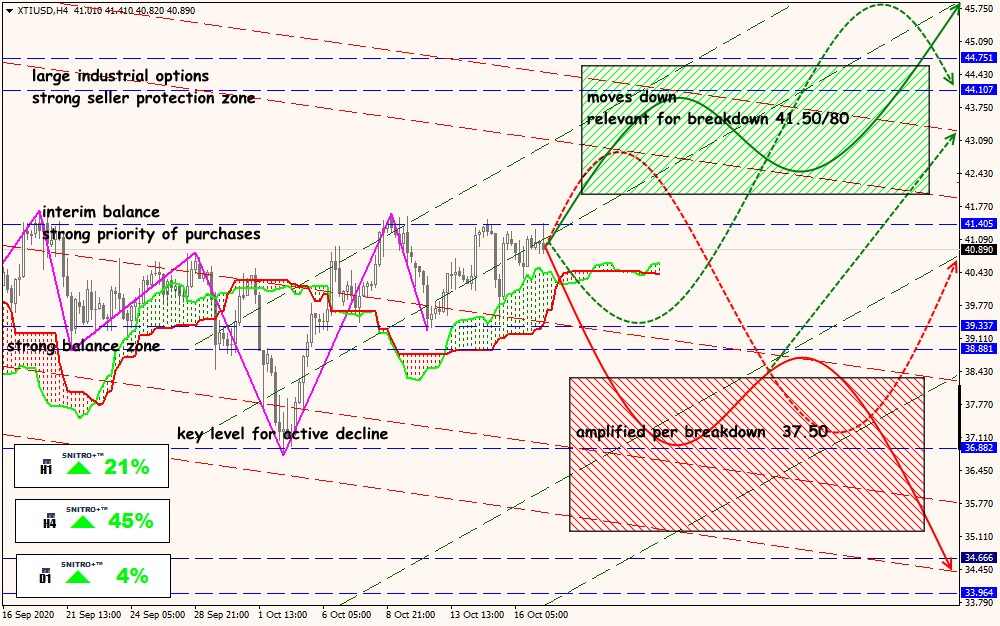