A series of terrorist attacks in Great Britain has significantly influenced a pre-election situation; last week, except the English elections and Draghi's performance, there was an excellent opportunity to earn on sales after the Canadian NFP and the next falling of oil.

The policy continues to generate volatility. A series of terrorist attacks in Great Britain has significantly influenced a pre-election situation; last week, except the English elections and Draghi's performance, there was an excellent opportunity to earn on sales after the Canadian NFP and the next falling of oil.

The English voters have again surprised speculators, having collapsed pound by unexpected results. Pyrrhic victory of conservatives has led to the loss of the legislative majority and a possibility of development of independent political decisions − from the formation of the government to negotiations on Brexit. Positive consequences for domestic policy are connected with a decrease in risks of an exit of Scotland from the structure of Great Britain. Losses of the Scottish nationalists were much more serious than at conservatives − 21 deputy mandates.

Results are treated now as the success of labourists led by Jeremy Corbyn – the most left of them. It is a hard blow, but not accident – May will remain on the prime minister's post though she had to dismiss two advisers who worked with her during the period of the ruling of the Ministry of Internal Affairs – from 2010 to 2016. May tries to create the government of minority with the assistance of the Northern Irish Party of Democratic Unionists, and on this news, the pound has won back more than 38%. Results of elections actively weren't pleasant to investors, up to Friday morning GBP/USD has dropped by 2% (nearly 300 points), FTSE 100, the main index of the stock market, on the contrary, have grown as many British companies get profit abroad, but stocks of the companies focused on domestic market seriously have decreased. Now they include a possible slowdown in the economy in the price – investors get rid of stocks of construction companies, restaurants, banks, producers of clothes and media. It isn't clear now how effective will be the «suspended» coalition and that politicians who will begin the current negotiations on Brexit will be actual before their end. Negotiations on Brexit can be continued only after completion of formation of the new government. Anyway, the president of the European Commission Jean-Claude Juncker has reminded: Britain has two years (term expires on 29 March 2019), and today's opinion of the British democracy doesn't influence it any more.

The minister of Britain on Brexit Davies has declared that results of vote mean lack of the mandate on «rigid» option of an exit, if May confirms this position — the pound will obtain an incentive to growth further. On Friday the English political dust has settled and now it is worth switching attention to monetary decisions of BOE.

Euro was disappointed in results of a meeting of the ECB, especially painful reaction was on the decrease in forecasts for inflation. The ECB has excluded further decrease in interest rates. It can be considered an indicator that reduction of the program of incentives is already close, but exact terms aren't specified again. Within quantitative mitigation the regulator has already saved up bonds for the sum of €2 trillion, therefore, the program will proceed at least until the end of December of this year. Nevertheless, Draghi managed to show careful «pigeon» rhetoric that hasn't allowed euro to fall seriously. But the European stock indexes all the same look underestimated, considering the improvement of an economic situation in the eurozone, it means euros will be actively sold at slightest risk.

The show «Conversations of Comey with Trump» were looked by 19.5 million American TV viewers; the large New York publishing house already offers $10 million to the former Director of FBI for memoirs. Testimonies of Comey taking into account the publication of written testimonies day prior were almost neutral, fears concerning an impeachment to Trump this year have decreased, though chances of the similar scenario after the intermediate congressional elections of the USA in 2018 have obviously grown.

It is interesting that in several minutes prior to the broadcast of Comey`s testimonies, a certain large player has dropped on the market gold futures with a notional value of $4 billion (more than 30000 contracts), obviously, have been sure that it won't be a crisis.

Arguments of Comey sounded unconvincingly, the stock markets have grown, having given support to the dollar. The committee of the Senate on investigation intends to interrogate Trump`s son-in-law Jared Kushner in the middle of June; if this interrogation takes place successfully, the subject of impeachment to Trump will leave the financial markets for a long time. Trump`s advocate intends to make the complaint to Comey for disclosure of private information − it will be one more show. The probability of an increase in a rate of FRS on Wednesday is estimated at 95%. The publication of results of an FOMC meeting and a Yellen`s press conference − the most important fundamental event of the current week after which medium-term and long-term trends can be created. Yellen`s tone concerning prospects of monetary policy is important for dollar, but most likely, the rhetoric of the head of the Federal Reserve will remain reserved and positive. The Federal Reserve usually doesn't consider the data appearing on the second day of a meeting, but in this case data on inflation and retails June 14 will influence the analysis participants of the market of the FRS rhetoric: at strong data – the situation will be considered positive, on weak – neutral. In this case following the results of a meeting the dollar risks to fall after the possible initial positive reaction as an increase in a rate is already completely put in the current prices.

Athens considers the option of nonpayment of the next payment within the aid program in case creditors don't relieve debt burden. The meeting of the Eurogroup about Greece (on June 15), most likely, will approve a new tranche of the aid and will allow avoiding the next default. Germany continues to oppose providing the additional help to Greeks and calls possible creditors of the bankrupt country for extra care. The increase in demand for assets of Greece will lead to the growth of euro: at pigeon rhetoric of FRS – quite strong, at hawk rhetoric of FRS – insignificant.

According to exit polls, Macron's party has received 32,2%-32,9% of votes in 1 round of parliamentary elections in France, that corresponds to 390-440 places from 577. Influence on euro – positive, but this result is already considered in quotations. The main events of the current week are planned for Wednesday: in the morning – statistics of the Chinese economy, in the afternoon – statistics on inflation and retails in the USA, in the evening − FRS. Also, it is worth paying attention to oil reserves, monthly reports from OPEC and IEA, and also inflations of the Eurozone in May in final reading and the ZEW index of Germany. 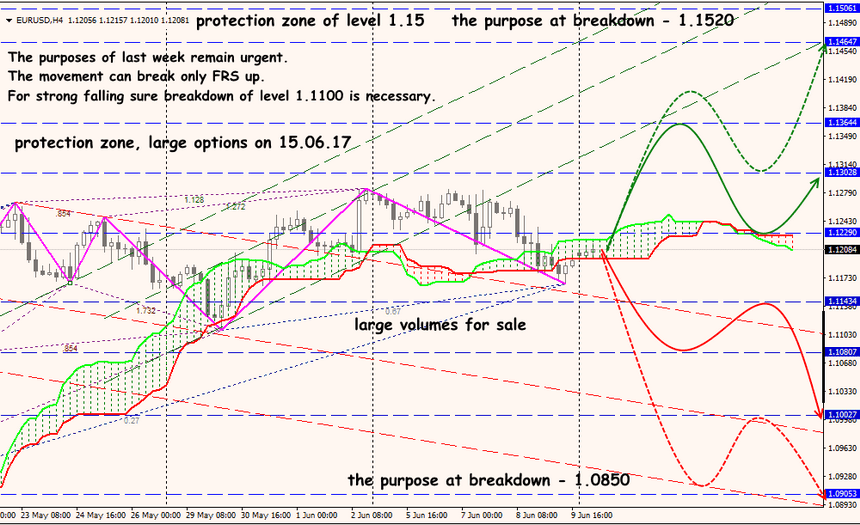 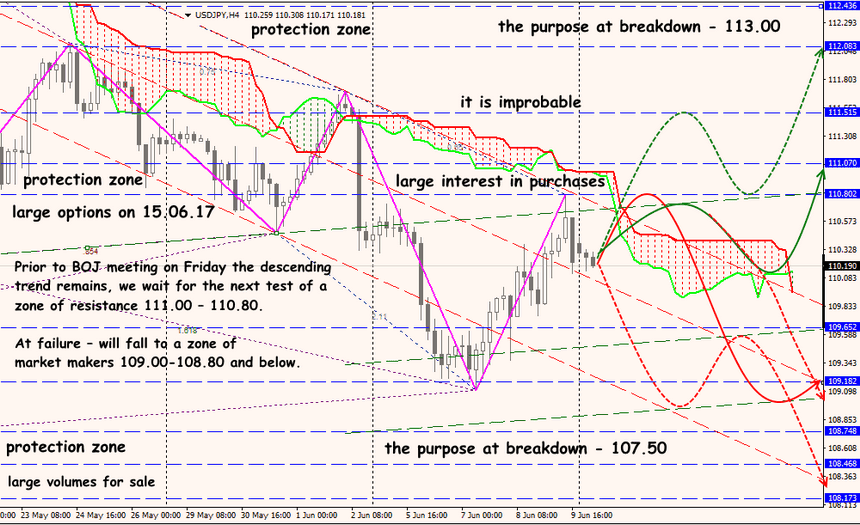