Italian deadlock: elections without the choice – it is worse than any result

Democrats of Italy have refused the beginning of negotiations on the formation of the government with the «5 stars» party. Today the president Mattarella will carry out a final round of consultations − with each party separately and with speakers of both chambers of parliament. The relevant purpose – the formation of the technical government (with powers till spring of the 2019th) with possible setting a date of new elections. During this time it is necessary to manage to accept the budget and to make changes to an electoral right that one of the parties has with guarantee received the majority in the following elections.

Falling of basic inflation in the Eurozone up to 0,7% became a shock, and the date of new Italian elections is extremely important for dynamics of euro and assets of the eurozone in general:

The next statement of FRS, even recognizing obvious progress on inflation growth, claims: there won't be change of policy of an increase in rates gradual rates. The rigid balance of risks for the prospects of growth of the economy is noted; members of FRS don't consider the current financial conditions optimum in connection with the growth of dollar exchange rate anymore. The first reaction of the dollar has been connected with excessive expectations of investors, growth in the second reaction reflected disbalance of the market and came in a separation from the decision of FRS.

NFP has been released below the forecast and has again disappointed speculators. The positive of the report can be considered the falling of unemployment rate to 3,9%, the main disappointment − lack of growth of salaries against the background of a decrease in participation in labor. Due to correction of last indicators, the general trend remained neutral; there are no reasons for the change of policy of FRS as the only growth of salaries higher than 3,0% will confirm the achievement with labor market of full employment.

Chances of increase in a rate of BOE at a meeting on 10 May almost zero, because of delay of growth of the economy of Britain. The chronic lack of progress on Brexit complicates a situation, May's proposal on the preservation of membership in the Customs union with the EU isn't accepted, there is no decision on the border with Ireland, a transition period and all previous arrangements under the threat of cancellation.

To estimate the prospects of correction of a rate this year, following the results of a meeting of BOE we pay attention to the arrangement of voices, new forecasts and assessment of the reasons of a negative in the economy. Of course, Carney will want to support the growth of pound by positive rhetoric, but traditional thorns in both parties for GBP/USD – are guaranteed.

The main news from the trade front:

The current week the White House offers the bill of cut in the expenditure of the government for $11 billion (much less the previous sum of $60 billion) – a considerable influence on the market isn't expected.

Reminder: on 12 May the world waits for Trump's decision on the nuclear agreement with Iran. Sharp reduction of prices of raw materials is possible only in case of preservation of former terms of the transaction, in case of a termination of the agreement, politicians will begin consultations on the new agreement, and oil will finally lose touch with the normal technical analysis.

From economic data we recommend to trace: about the USA − inflation of consumer expenses and the analysis of moods of consumers according to Michigan; about Europe, there are no important data, but the trade balance of Germany is of some interest.

Industrial PMI of China left within the forecast, but risks of strong delay of economy increase. Beijing has expectedly devaluated yuan before negotiations with the USA, which is emphasized readiness for rigid countermeasures. We pay attention to trade balance on the morning of Tuesday and data on inflation on Thursday.

We wait for Powell's performance on Tuesday at 9:15 (CET) at the SNB and IMF conference: special attention to assessment of growth of inflation, labor market and risks for the economy. We assume that the head of the Federal Reserve once again will place emphasis on a gradual increase in rates that will become an additional negative for the dollar.

Draghi will act on Friday at 15:15 (CET), but the performance subject isn't connected with monetary policy, the ECB is quite satisfied with a situation with falling of profitability of state treasury bills of EU countries and euro exchange rate, but it is recommended to listen. If Draghi (suddenly!) will say that falling of inflation was temporary because of seasonal factors − euro will rise. 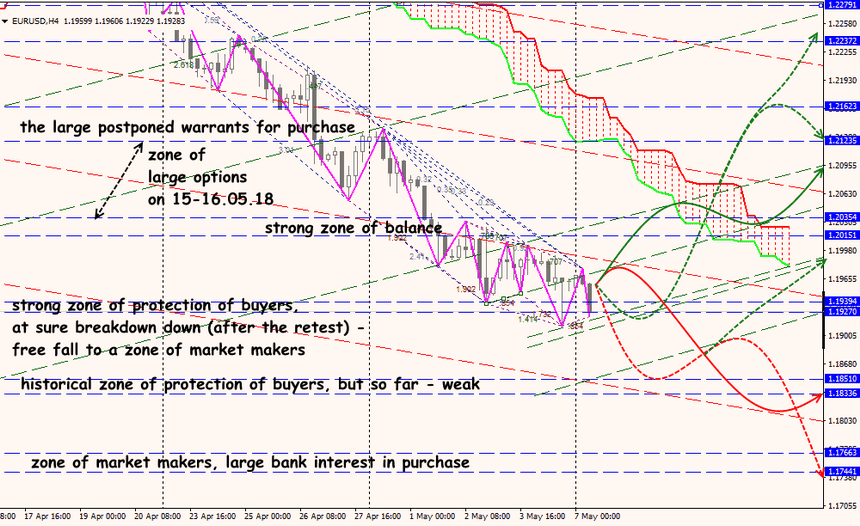 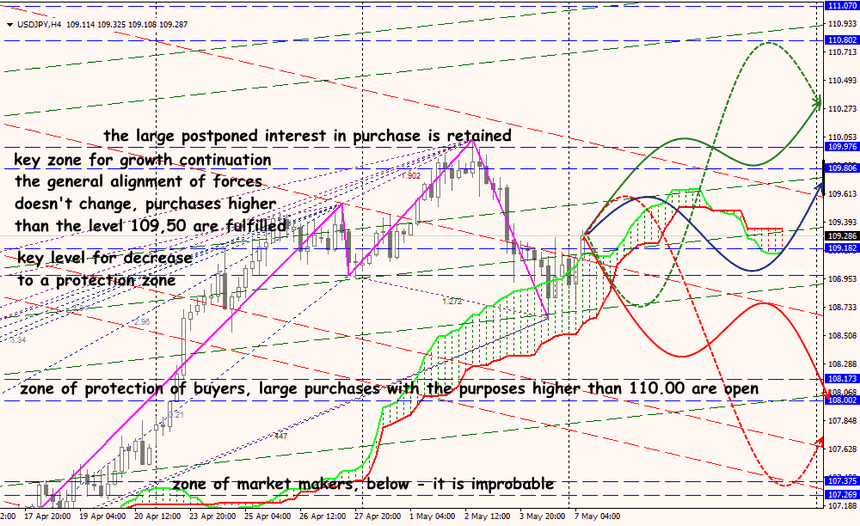