Is it quiet from your side? Then we go to you! Conflict geography as a market factor

The new front has been opened in the trade war of the USA-China; Iran threatens with transport blockade and oil for $100.

Trump goes to Europe, and the delegation of Beijing comes back from there. We wait for results of political travel in dynamics of the price.

Trump's claims to stop the supply of the Iranian raw materials till November 4 stimulate world management to look for options: Iran has suggested to carry out purchases of the oil through the private companies to avoid financial sanctions of the USA. Trump tries to cut off the large producer from the world and, in general, the situation looks even more dangerous, than during the oil shocks of 1979 and 2008. If world industrial warehouses of raw materials become empty, even the insignificant surge in demand or the geopolitical conflict will be enough to entail an aggressive rise in the price of oil.

By estimates of analysts, in 2019 the output of black gold in Iran will be reduced by 1.3 million barrels a day that guarantees huge deficiency to already balanced oil market, and slate production won't be able technologically to close this hole.

The commission on the Joint Comprehensive Plan of Actions (JCPA) into which «five» of international mediators and Iran enters, has agreed to support and develop the extensive economic relations, but so far Europe doesn't manage to protect the nuclear transaction with Iran. In case of continuation of purchases of the Iranian oil of the companies of the EU and Asia with the international business risk to appear under rigid «secondary sanctions» of the American Ministry of Finance and will be cut off from the capital markets of the USA.

Besides, the Iranian armed forces can block the Strait of Hormuz through which the Middle Eastern countries export about 20 million barrels of oil — the fifth part of world production. There is just no the top limit for the speculative price in such situation.

Last week yuan has endured one of the most large-scale intra day falling in the history which has forced NBK to come up with intervention on the market for the purpose of stabilization of a course. On Thursday night the USA and China have exchanged new duties on $34 billion, but Trump's threat is planned for a long time: in two weeks there will be an increase in duties on the remaining $16 billion, further the sums have grown from unclear $250 billion and to fantastic $500 billion exceeding all current trade turnover with China. The reaction of the markets was strange, NBK has calmed the panic in the Chinese market so far, and a decrease in profitability of state treasury bills of the USA has allowed the investors hedging open positions on the American stocks. The state print media of China has compared Trump's administration to a gang of hooligans; the promised trade negotiations haven't begun during the weekend.

Traditionally, before a speech of the head of the Federal Reserve Powell in the Congress on 17 July, on Friday in 17.00 CET, the semi-annual report of FRS on a monetary policy will be published, but the rhetoric will hardly differ from a press conference on 13 June.

Draghi will act in European Parliament on Monday in 15.00CET and 17.00CET, the intermediate meeting of the ECB can lead to the next leakage of the insider; on Thursday we pay attention to the protocol of the last meeting. Any positive will be interpreted in favor of the speculative growth of euro. Current week inflation of the prices of customers will be a main data of the USA; on the Eurozone, it is necessary to trace the ZEW index of Germany, inflation of the prices of customers of Germany and France for June and the British data on growth rates of industrial production.

The pound continued growth on positive data of Britain; May on Friday provided the project of the new relations with the EU after Brexit – the softest option from all, offered earlier. It is offered to resign to supporters of more rigid exit, but so far only the Minister for Brexit David Davis and his deputy Steve Baker have decided to do so. There were no other applications for resignation.

The insider from the EU reports that new offer on customs doesn't suit the EU (especially to Merkel), as well as the preservation of the uniform market without maintaining freedom of movement, but the official reaction of the EU isn't sounded yet. Surely we pay attention to GDP of Britain for May (on Tuesday). Also on Wednesday evening, it is worth listening to Carney – hints on regulations of toughening of monetary policy are possible.

On Wednesday the Bank of Canada will pass the important decision on an interest rate: it is expected that the regulator, after all, will be solved on increase from the current 1,25% to 1,5%. Reminder: the season of financial statements of the American companies for the 2nd quarter starts. China will provide to the world data on inflation on Tuesday morning and balance of trade balance for June on Friday morning.

Trump's Europe tour begins, the first point – the summit of leaders of the countries of NATO. Active appeals of Trump to increase in a defense expenditure are expected, but against the background of war of trade duties, this offer will obviously not get support. Visits to London is also planned where, except the political trade with May, the rendezvous with Queen Elizabeth II is necessary to the president. Traditionally we look for the main comments on Twitter. 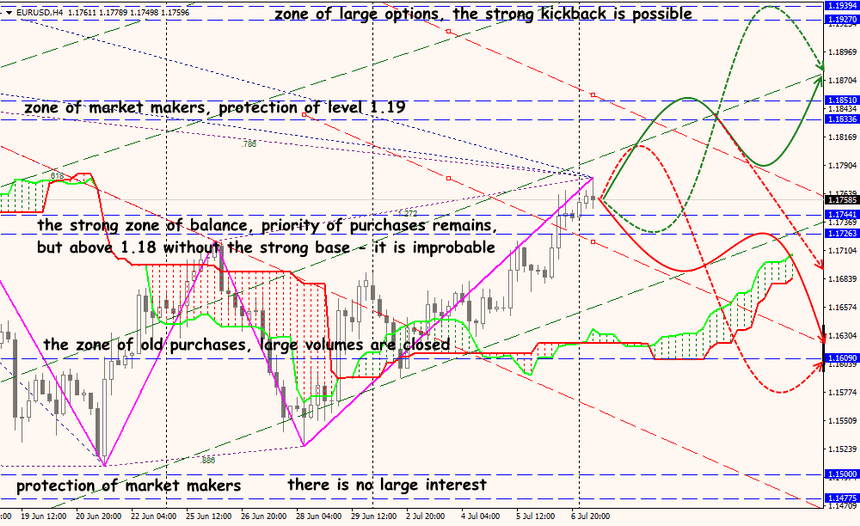 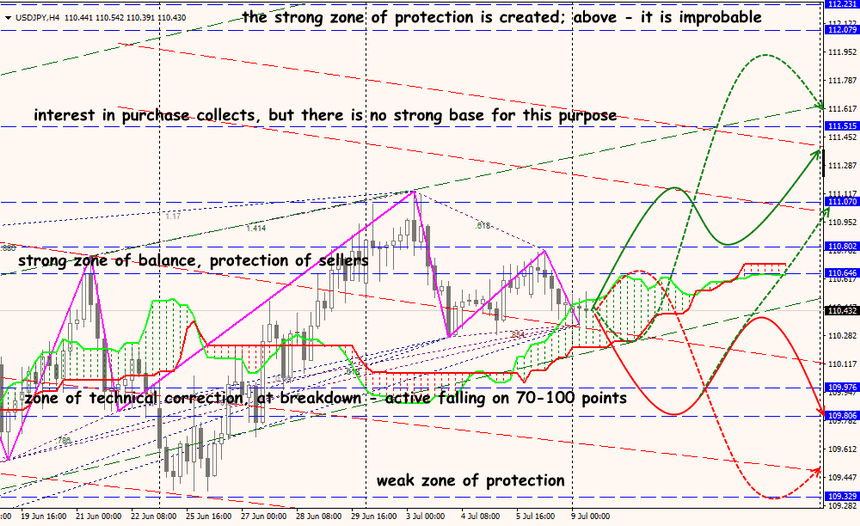