Interventions as a rescue: the market doesn't need expensive money

The dollar actively became cheaper in all spectrum of the market in response to weak NFP.

Tax reform and a ceiling of a national debt remain drivers of September for the USA; the purposes for euro depend on verbal interventions of Draghi again.

There is nothing new in data of NFP − below expectations in all characteristics, the growth of labor market and economy, in general, can be considered sure, though without inflation acceleration. Parameters confirm achievement of almost full employment, that is FRS cannot constrain increase in rates. You shouldn't wait for acceleration of inflation in the 4th quarter as only fiscal incentives, devaluation of dollar or cost of energy carriers can be a source of growth. At the moment strong industrial ISM against the background of optimism of an interview of Cohn on tax reform has fixed a turn up for dollar.

The first Trump`s speech from series «Tax Reform» is tailored of active advertizing, the only figure – decrease in a corporate tax on 35% to 15%. Instead of concrete statements, it was necessary to be content with statements of the Minister of Finance Mnuchin that the Congress, after all, will prepare the law on tax reform and Trump will declare replacement Yellen until the end of the current year.

The next blackmail of dissolution of the Congress if in the course of the increase in a ceiling of a national debt the financing of a wall on the border with Mexico isn't defined, became the key moment of the speech of the president. By the way, representatives of the department of internal security of the USA already declared entering into the contracts on the construction of several prototypes of a wall, in particular, near San Diego.

The Congress still has the possibility of cancellation of ObamaCare till September 30 – on the simplified scheme without an absolute majority. Certainly, the need of urgent assignment for mitigation of consequences of a hurricane will make congressmen more compliant. The markets will be sensitive to comments of FRS`s officials current week (especially − the member of the leading council of FRS Brainard on Tuesday), in particular, in respect to the reasons and duration of delay of inflation in the USA.

In the 4th quarter the U.S. Treasury is going to attract $501 billion and against the background of the forthcoming reduction of balance of FRS, it creates one more problem: who will begin to buy Treasuries in such volume? If the dollar doesn't show steady growth by the end of September, hardly dollar assets will be in demand.

On September 5 it is worth tracing Trump's meeting with Mnuchin, Gary Cohn, leaders of the Congress Ryan and McConnell and heads of the budgetary committees. It is possible that the solution to a national debt will be postponed until the end of the year, for now, can adopt only the intermediate agreement which will allow the government to stretch till January 1. Any new information on tax reform will cause new speculation on dollar.

The growth of EUR/USD above 1:15 is substantially caused by political problems in the USA, nearly a year the investments into euro grow not on expectations of an increase in rates of the ECB, but on fears of the decline of dollar on Trump's policy and FRS. On September 7 the ECB will sum up the next results, the markets wait for hints on audit euroQE, but changes of rates and volume of the program of stimulation at this meeting aren't expected. It is unlikely the Central Bank will risk changing key formulations now, being afraid of the further growth of euro. The growth of inflation in the Eurozone corresponds to forecasts for 2017, a decrease in forecasts for growth of economy and inflation for 2018-2019 will be insignificant.

Despite «week of silence», on Friday the favorite method for communication of the ECB with ordinary players of the market, the insider through «anonymous sources», has been used again, as a result reaction of euro for NFP has been completely leveled. Most likely, on Thursday from the mouth of Draghi an assignment to committees to develop working versions of the program of an exit from QE will sound, it usually may take time not less than 2 months, it is improbable that the main decision will be passed until December 14. If Draghi confirms it, short-term speculators will close large long for euro already now that will cause the sharp decline of the common currency.

Today the low liquidity because of the day off in the USA and Canada is expected, but nobody canceled an escape from risky Asian assets because of nuclear tests of North Korea. The current week in relation to the USA we will note data of ISM services, labor productivity and prime cost of labor for the 2nd quarter, on the Eurozone − PMI of a services sector and GDP in the second reading; the same package of data – from the China. Anyway, by the importance of influence on the market the figures current week give way to comments, therefore we listen and don't risk in vain. 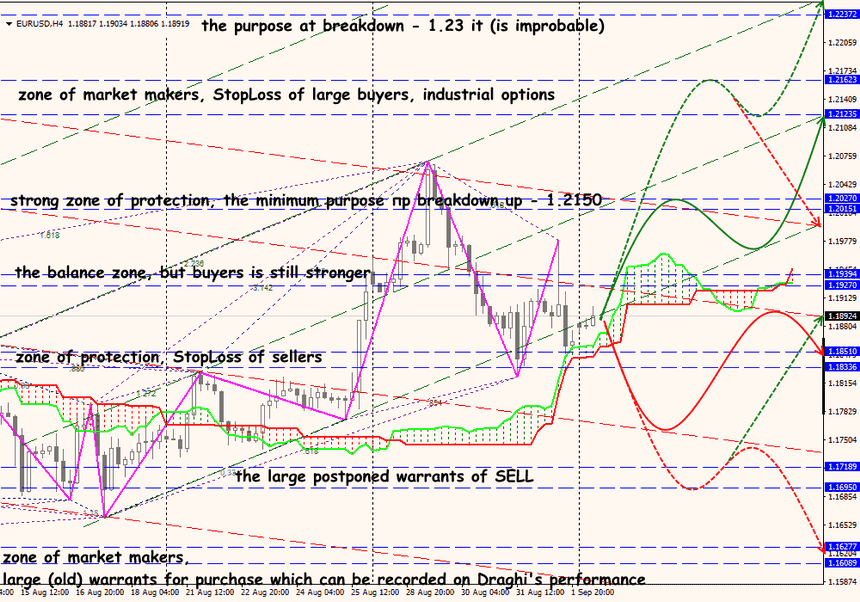 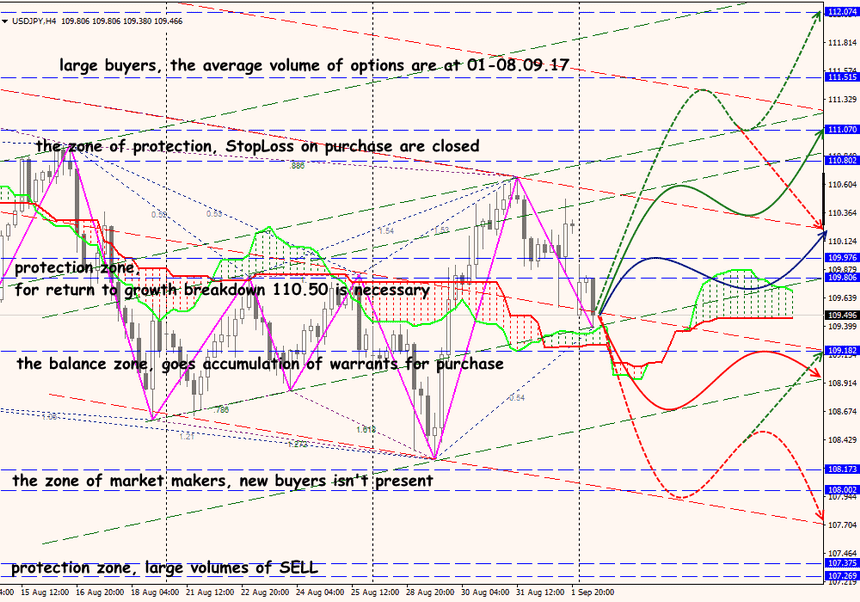