How to trade on relevant chaos?

Response to protocols of FRS is minimum; the influence of hurricanes on the economy of the USA is noncritical.

Trump signed canceling of Obamacare and threatens Iran; Brexit at the deadlock again. The new week will be eventful which have opposite influence on the markets.

Necessary high inflation is still absent in Europe, industrial production grows quicker than it was expected therefore at a meeting on 26 October it is necessary to decide accurately on volumes of repayment of a debt next year. The ECB pleased with the variety of the insider from which information on plans of extension euroQE for 6-9 months in case of abbreviation of the budget of repayment of assets to €40 billion (according to some information − to €30 billion) was the main thing. Draghi in the performances was quiet and confirmed saving rates at the current levels before the termination of the QE program, expectations of inflation falling by the end of the year and need of saving the considerable incentives of the ECB.

The dollar has again decreased on the statistics: hurricanes have provoked sharp jump in consumer prices in the USA, but calculations of analysts haven't come true as the indicator didn't consider the cost of food and energy carriers. The weakness of growth of the economy in the third quarter is expected.

Weak inflation gradually breaks the unity of FOMC concerning the increase in a rate, statistical data prior to a meeting will become decisive, acceptance of tax reform by the Congress will lead to a change of forecasts for growth of the economy. Yellen`s performance was hawk; the head of the Federal Reserve has highly appreciated falling of unemployment rate to new minima against the background of the long-awaited growth of salaries, and still considers that inflation will begin growth with a further growth of labor market.

The pound prepares for a new portion of conflict comments before the EU summit current week, the publication of data on inflation, retails, statistics on the labor market and also Carney's performance are planned. The positive on inflation will be a signal to purchase as will put the strong pressure on BOE and can lead to a change of market expectations on increase in a rate this year. Dynamics of the English assets accurately monitor a political situation. Comments on Brexit continue to press for pound: progress in negotiations isn't observed. However, Barnier has declared that the EU begins the internal debate on key parameters of the trade agreement and the gingerbreads, which are prepared by Europe this way, have to motivate Britain to agree for the sum of payments higher than €50 billion.

The ultimatum for Barcelona expired; the refusal of the declaration could close the Spanish game in democracy without mutual losses (a positive for euro); if Catalonia insists on declaration of independence, the central government of Spain will introduce strict administrative control, the risk of the civil conflicts grows that will hardly support the European assets. Actually, Catalonia declared only secession of Spain for the purpose of expansion of the spheres of influence and reduction in taxes. At the same time she wishes to remain in the European Union and with euro as currency, that is it was talked not of disintegration of the EU but only about reformatting. It is natural that Brussels against such scenario.

Before the termination of term of the ultimatum, Catalonia in the form of the letter to the prime minister offered Madrid the system of negotiations which can continue two months. Actually − it doesn't mean refusal of results of a referendum therefore the government has the right to involve the 155th article of the constitution of Spain which permits to limit self-government in the rebellious region.

Trump has refused to confirm execution by Iran of conditions on the nuclear agreement, despite that the agreement has got active support in Europe, and cancellation of this contract will provoke DPRK to new nuclear tests. The U. S. Congress will make the final decision according to sanctions against Iran within 60 days. The next start of the Korean rockets is planned on 18 October in response to joint exercises of the USA and South Korea which Pyongyang considers as an act of aggression.

A current week early elections in Lower Saxony in Germany are planned, the victory of the Merkel`s party will strengthen her position in the course of formation of the “Jamaica” coalition that is estimated by analysts as a negative for euro. The vote failure on an electoral reform in the Senate of Italy will lead to the decline of euro, but if voices are found and reform is ratified − it is necessary to expect growth of EUR/USD.

Next «insiders» − in the obligatory program of the market. SuperMario will act in Frankfurt, the ECB doesn't promise to broadcast, but it will be his last speech before «week of silence» before a meeting on 26 October. Investors will buy up euro on falling counting on the decision on euroQE especially as the issue of the start date of reduction isn't resolved yet. 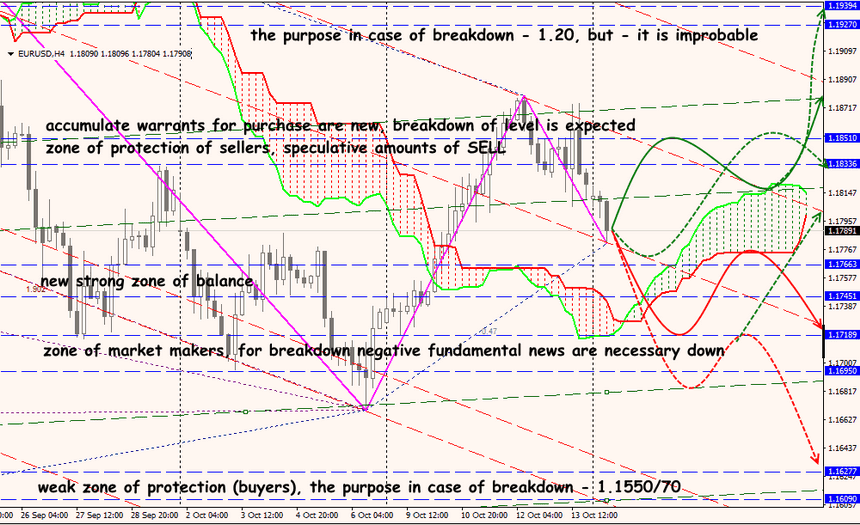 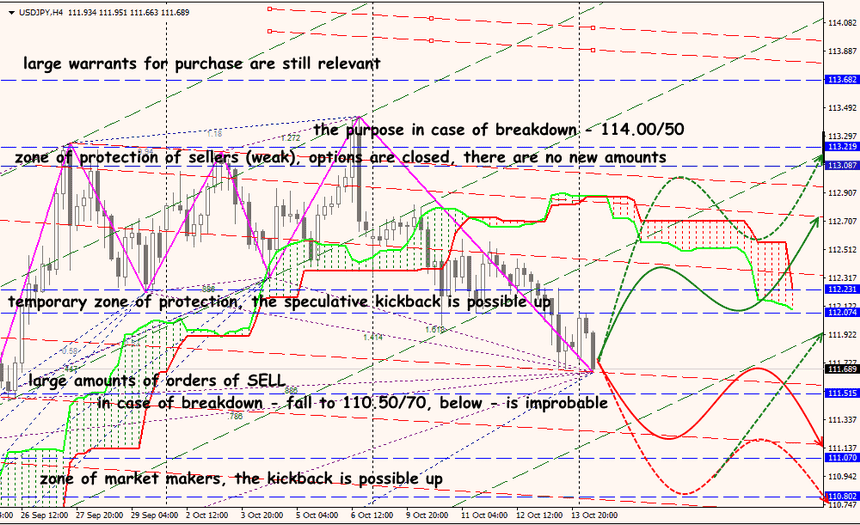