From Europe to America: difficult way of hopes and positive

The «Jamaica coalition» is canceled; the U.S. House of Representatives has supported tax reform.

The German subject pressed all the week on the European markets: difficult negotiations on the block of Merkel, Green Party and free democrats continued till late Sunday evening. As a result, a whole negative: the agreement isn't reached, and liberals have declared an exit from negotiation process; questions of immigration, climate and distribution of finance in the Eurozone became the main contradictions. At the moment in the Bundestag, there is no majority (remained in the pseudo-coalition have 44% of mandates only), at the same time social democrats exclude the participation in the alternative union with CDU/CSU.

Merkel has sounded two possible options on Sunday night (the German TV channels broadcast a performance): the government of minority which wasn't yet in the history of Germany, and new elections. The second option is improbable because it is dangerous by strengthening of the Nationalist Party of eurosceptics «Alternative»; the possibility of a new round of negotiations will be discussed today.

Last week Draghi's performance hasn't exerted an impact on the market as he didn't mention monetary policy in the report. Today he speaks before European Parliament and the head of the ECB, most likely, uses the verbal abilities to support Merkel politically and to correct euro after falling at the opening of the week.

It is expected that after the vote on the budget by the parliament of Britain on November 22 May will be able to offer the EU the new sum of compensation. If the new sum is more, then the probability of transition to the second stage of negotiations in December will sharply grow (and GBP/USD, certainly). If Britain continues to draw on the sum of £20 billion that negotiations will be sent «to vacation» till March, May − to resignation, and pound − to a zone 1.23-1.25.

The serious political victory of Trump – ratification of the bill on tax reform by the House of Representatives has been quite expected, the stock market has reacted with growth. It is the most large-scale fiscal reform in the USA for the last 30 years.

However doubts in the relation of ratification of reform by the Senate amplify, especially after inclusion in the bill of the provision on cancellation of the individual mandate Obamacare: Republicans are able to afford to lose only two voices. McCain's position questionable so far, aside from several senators who have opposed Trump for purely political reasons. The vote is expected in a week, now it is only possible to trace comments, when clearing a position of key Republican senators there can be strong speculation.

The special prosecutor Mueller has issued the summons for Trump (concerning «election case») that has led to leaving from risk on the closing of the week. Aggravation of a political situation is especially unprofitable to the president now especially as committees of the Senate have supported the opinion of the commission of Mueller on the need of making open indications by the son and Trump's son-in-law. We follow the developments right after the American days off.

The name of the vice-president of FRS can become an additional negative for dollar - information on claims for this post of Mohamed El-Erian has appeared though the market has already considered John Taylor's appointment. Yellen`s performance at a forum in the business school of New York University on Tuesday will hardly contain statements on prospects of monetary policy especially as the opinion of madam Janet on the period of a December meeting is already interesting further to nobody.

Due to the Thanksgiving Day (on November 23) a short trade week is waiting for us: on Thursday the markets of the USA are closed, and on Friday will work on a short day. Large players are going to lock in profits on Wednesday evening, the auction on Thursday and Friday will take place within a low liquidity. Any news can cause the inadequately strong movements.

The protocol of the ECB will be published on Thursday and may contain the information which is not considered by the market yet, however, the strong response in the thin market on Thanksgiving Day is improbable.

On Tuesday we wait for the next report of the Bank of England on inflation − if the report does not contain positive or negative sensations, then the pound shall react positively. In the Wednesday it is worth monitoring traditional autumn announcement of the Minister of Finance Hammond on the draft budget.

The publication of the protocol of FRS is practically not of interest to the market, the growth of the economy of the USA remains sure, the influence of hurricanes was insignificant. The rhetoric of the Federal Reserve System remains invariable and will not influence waitings of increase in a rate in December. Only reasoning’s on causes and effects of the decline in yield of state treasury bills of the USA can cause a response of the market, small-sized negative comments can cause the insignificant decline of the dollar. 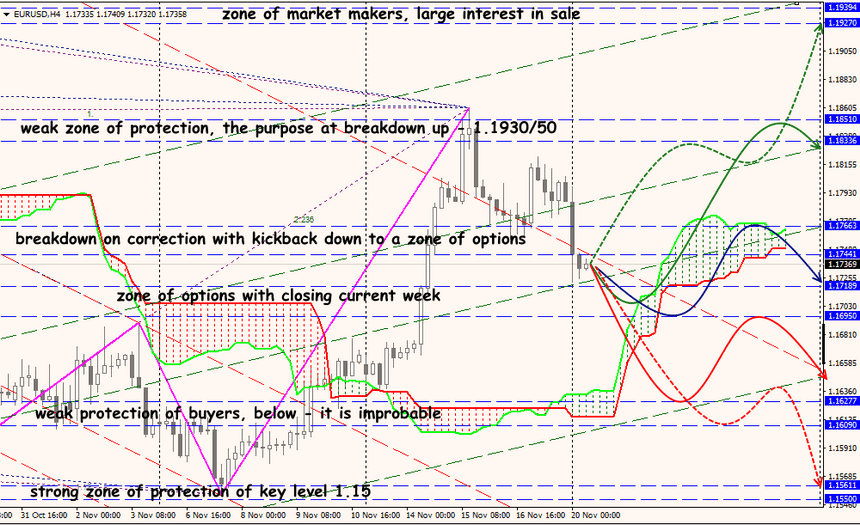 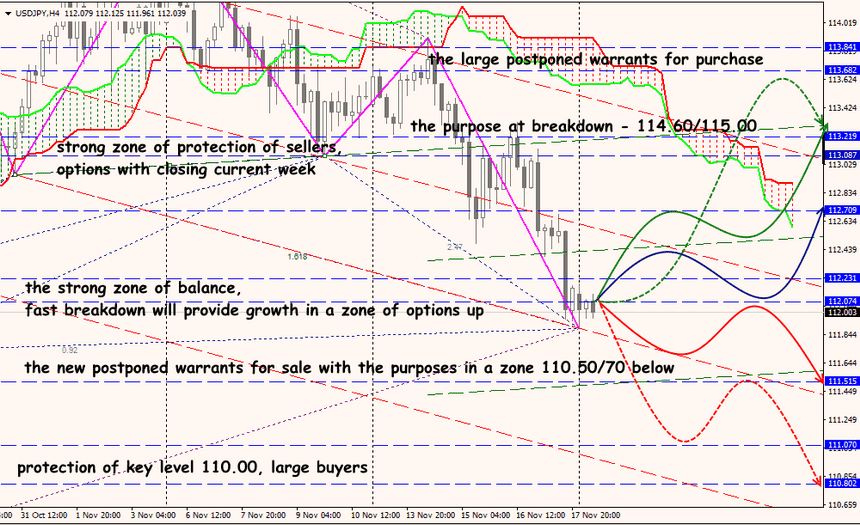