The French breakfast or waiting for a holiday on others street

In the fight for Brexit, Great Britain should resist almost to all Europe.

Trump became more active; the White House announced the suggestion on taxes; the decision on a ceiling of a national debt of the USA is postponed for the current week; the European Central Bank tries to keep a neutrality, and Europe waits for a finale from France.

Trump was flown around in anticipation of 100 days from the moment of coming to power: one day suggested imposing 20% tax on import of coniferous wood from Canada, another day forced Canada and Mexico to reconsider cooperation within NAFTA, almost promised (in an interview with Reuters) the conflict with North Korea, and finished week with threats «to terminate» the American-Korean KORUS trade agreement.

And, if the political conflict in Asia really outgrows in military, then the yen should refuse a traditional role of an asset shelter in favor of Swiss franc. The market tried to speculate actively as real steps in this direction are improbable.

Expectations from the regular meeting are exaggerated traditionally, most likely, FRS will keep neutral formulations of the previous statements, despite the delay of the economy. Nevertheless, inclusion in plans for additional fiscal components is expected that intensifies the process of the next increase in rates. The stock markets have to give the most serious volatility following the results of FRS meeting, and currencies will move in the second echelon.

Mitigation of threat around the French elections creates prerequisites for turning of incentives of the European Central Bank, but it still doesn't promise to toughen of rhetoric even at Macron's victory. At the regular meeting, the Central Bank has kept the key parameters: a base rate on zero, marginal − 0,25%, on deposits in minus (-0,4%), they are promised not to change QE in the amount of €60 million till December of the 2017th. As usual, euro was nervous at a Draghi`s press conference, but has returned to habitual levels after polls have shown that 60% of French are ready to prefer Macron instead of Marine Le Pen.

Polls across France still have key value for dynamics of euro, but till to a debate on May 3, the situation can be flat.

Last week the Bank of Japan left monetary policy without changes, but has raised the economic and has lowered the inflationary forecast. The economy has been given the most optimistical estimation for 9 years, in hope that growth of foreign demand will help to keep an impulse for the economy, dependent on export. Japan current week works only on Tuesday, during the FRS meeting the Japanese exchanges will have a rest so volatility of yen should be «caught» on allied assets.

In the fight for Brexit, Great Britain should resist almost to all Europe: the Saturday summit in Brussels organized only on the British question became similarity of an auction for the countries of the block which constantly raise the price for an exit from the union. Merkel's remark that London has unreasonable illusions («at first – payment of debts, then – exit»), underlines how heavy negotiations will be. There is information that Britain actively looks for allies, meanwhile, it wasn't succeeded to hold informal consultations with Germany, but the number of the British diplomats-negotiators in embassies of the countries of the block is actively increased.

Negotiation positions of the EU amplify, there is a good chance to keep stability in the region, and also to prevent the movement to an exit of other countries. Prime minister May actively presses on voters, demanding to support Conservatives on June elections with the purpose to strengthen her political positions in negotiations. The defeat of populists complicates to government process of an exit and receiving more favorable conditions for the transaction.

The main European platforms are closed today, but America begins month May with active work. Traditional NFP is coming: if the total of jobs grows at preservation of unemployment rate in the range of 4,5%-4,7% against the background of growth of salaries − it is necessary to expect growth of dollar exchange rate, the growth of the stock and debt markets of the USA, gold falling. However, on Friday, the market will already wait for polls across France, large players will fix transactions before elections on May 7 − reaction to statistics will be short-term. The victory Le Pen will be followed by a flight from risk (decline of euro), Macron's victory − to the vertical growth of euro, the growth of the stock markets, state treasury bills of the USA and Germany. Therefore − we listen and we don't risk in vain. 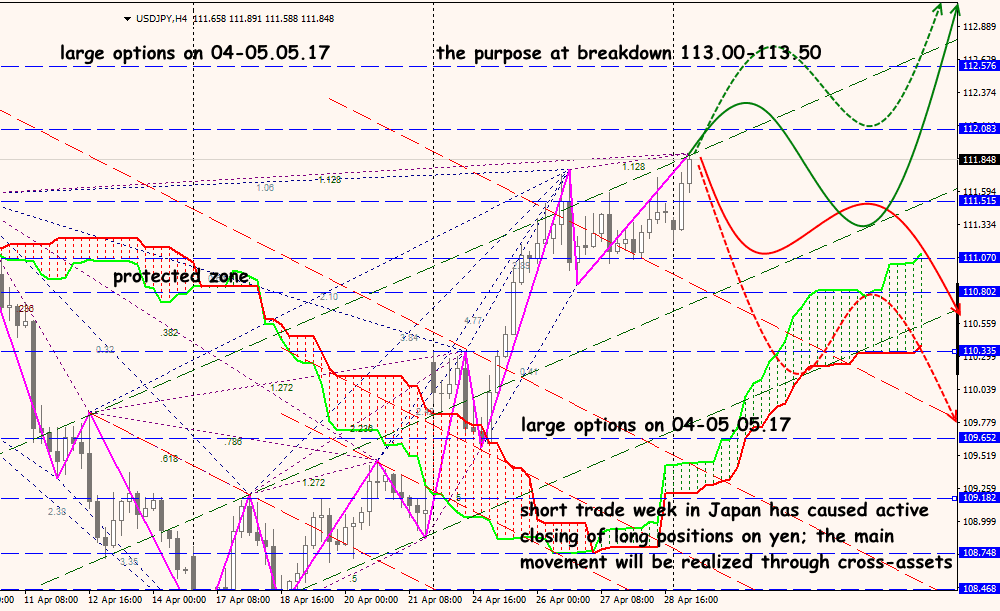