The classical market in search of balance: Germany − looks for allies; Spain − holds a meeting; China − has a rest;

Oil has updated a 9-month maximum thanks to increasing demand for gasoline, falling of world reserves of oil (especially in the USA) and also because of increase in efficiency of the agreement of OPEK+. On this background, the slate companies of the USA have significantly quickened, and hedging volume on futures − maximum since the beginning of a drop in oil prices in 2014.

The result of parliamentary elections in Germany can be considered failure not only because of the party of the German eurosceptics (12.6% of voices) but also because now Merkel's party have to build the coalition with Green Party and FDP party. Such political union is negative for the German economy and can lead to the growth of the anti-European moods in the EU. Merkel doesn't intend to discuss any reforms on the distribution of taxpayers money of Germany and the northern countries before the creation of the coalition on which main negotiations will begin after elections in Lower Saxony after October 15.

Macron performed nearly 2 hours with his Napoleonic plan, but all his ambitions can be focused on one idea: The eurozone has to create the economic potential for the successful competition to China and the USA. Total reaction − from welcome in Brussels to careful in Berlin and a straight line hostile in Prague − speaks about the high degree of dissociation in Europe.

The referendum fact in Catalonia will exert a weak impact on the markets, the government of Spain controls finance of the rebellious region, the Constitutional court has defined vote illegal, the debt market is still quiet. As a result: 90% of participants have supported the independence of Spain, the number of victims in disorders has exceeded 1000 people. The situation will be an additional negative of euro in case of need early elections to parliament.

The key moment of last week − Trump and his reform:

So far what was said by Donald doesn't mean at all that the rich won't receive benefit from a reduction in taxes (potential income from tax reform in his business is estimated at $1,1 billion). In this regard, democrats won't support reform that does its acceptance by the Senate problematic. Too small chances in the ratification of the tax program this year so far, at least, in the stated volume. In the market, the opinion «walks» that reform will take place the Congress only if scales of reduction in taxes don't exceed $4 trillion within 10 years (according to the plan − there have to be $5-5,8 trillion).

For the next 2-3 weeks, meetings with candidates for a post of the head of FRS will be held while the favorite Kevin Warsh, the active opponent of the QE program, is considered. Adoption of the budget by the lower house of the Congress on Thursday is planned that can be the last obvious positive for dollar before NFP.

NFP for September is expected weak because of consequences of hurricanes − sharp growth of week applications on unemployment already points to it. Investors pay the main attention to the growth of salaries, failure data with the sharp growth of unemployment rate can lead to the long decline of dollar and reanimate doubts in an increase in a rate of FRS. NFP better than the forecast will become a surprise, but for steady growth, the dollar needs strong dynamics on salary.

Yellen has said that, despite weak inflation, FRS isn't ready to change rhetoric and insists on the need for an increase in rates. Current week madam of FRS will act again on Wednesday, but the subject of a performance doesn't concern prospects of monetary policy.

Draghi's performance last Friday was canceled for the family reasons, current week his speech is planned on Wednesday after the intermediate meeting of members of the ECB, but official broadcasting isn't promised. Falling of basic inflation in the EU reduces chances of the announcement of the expiration date of the program euroQE on October 26. Euro will be under pressure before parliamentary elections in Italy and any growth on toughening of the rhetoric of the Central Bank can be used for medium-term sales. The European regulator obviously doesn't want the strengthening of euro exchange rate and is ready for verbal interventions on a mark 1.20. We wait for the next insider from the ECB in favor of growth.

May's promises to pay bills of Europe and to soften the stand on a number of questions haven't removed stress in the development of the process of Brexit. The European Commission continues to demand «everything or nothing», and therefore the beginning of negotiations on trade agreements in October isn't planned. Meanwhile, in the British statistics no «corporate panic» is visible, there are signs of an insignificant decrease in capital flows, but strategic prospects frighten nobody anymore. Sudden revision down of GDP for the 2nd quarter says that even increase in a rate of BOE not especially will affect a course. Carney's comments couldn't stop falling, traders hurried to lock in profits on long positions at the end of the month and quarter.

The prime minister of Japan has dismissed the lower house of parliament, though a number of statistical data gives an impulse for economic optimism. Thanks to a fresh series of shifts in the cabinet, Abe's rating has sharply grown and the Japanese leader has decided to provide to the party two more years of domination in parliament. Though on polls of the Mainichi Shimbun newspaper, 64% of residents of Japan haven't approved this step, there won't be the best moment for this. Early elections are appointed to October 22.

In addition to NFP, the current week the balance of trade balance, the report of ADP, ISM of the industry and services will be important data on the USA; it is worth tracing the PMI indexes of the eurozone and Britain, the solution of RBA on a rate. Asian assets will fulfill only «their» factors as China leaves to celebrate for the whole week, and its PMI published on Saturday appeared above expectations. It is worth paying attention to data on Australia which has to define an AUD/USD dynamics, at least, for 2-3 weeks. We remind: North Korea prepares for anniversary of the Communist Party, we wait for a fresh portion of provocations to which the yen will react most nervously. 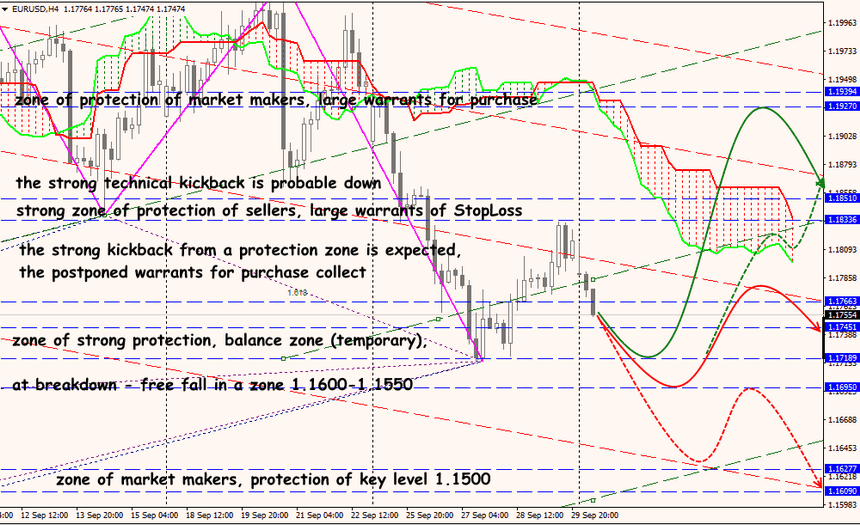 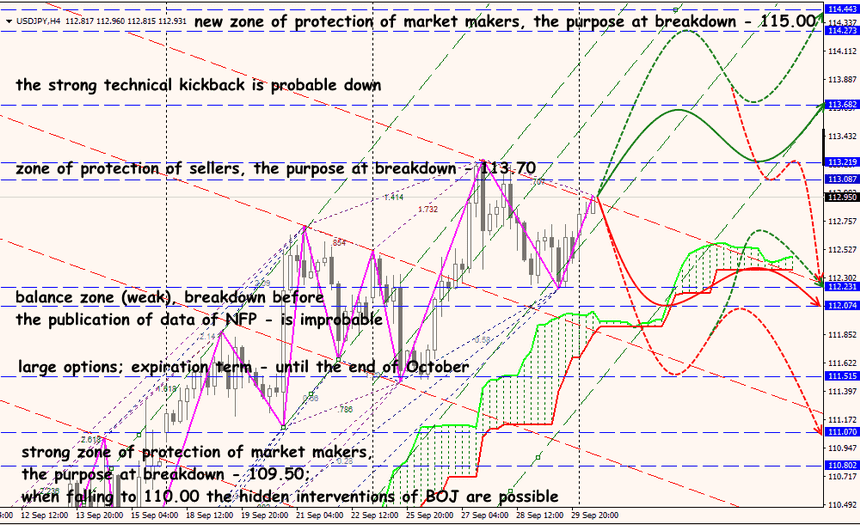