Exchange maneuvers with a distant aim

Trump brings the first international victories to home; the decision of OPEC, despite the quite expected result, has disappointed investors.

The main markets remain on local maxima (except oil); large investors and the leading banks maintain speculative demand for Bitcoin; Trump brings the first international victories to home; the decision of OPEC, despite the quite expected result, has disappointed investors.

In recent months the market puts excessive expectations in various events without the significant bases, most likely, according to recommendations of large financial structures. As a result, at any option of events there is a quick fixation of profit, more similar to flash crash, and only then the markets give a proper response.

So, it is considered that GBP/USD has failed lower than 1.2787 against the background of data of YouGov poll on the reduction of a lead of Conservative party before elections in Great Britain by 3 percentage points. However, situation rather purely market, than political: the large volumes (bids on fixing of profit on shorts) located in a zone 1.2850-1.2800 couldn't constrain interest in sales. Especially as the strong negative pressure upon pound was put by terrorist attack and revision down GDP in 1 quarter. In general, the pound will be under pressure to the announcement of results of elections on June 8.

Last week Draghi has confirmed that the ECB is ready to start reduction euroQE earlier than will increase crediting costs especially as the program of buying up of bonds expires at the end of this year. If inflation in corporate sector begins reflecting the official data on consumer prices in the second half of the year, increase in interest rates can begin earlier than investors expect at the moment.

Today Draghi acts in European Parliament and its comment may be taken as a basis when forecasting an outcome of a meeting of the ECB on June 8. Change of rhetoric and growth of euro on this fact is improbable. Since Tuesday, the EUR/USD dynamics will depend completely on the Eurozone and the USA data, but it is impossible to forget about a political component. The French parliamentary elections and a meeting of the European Central Bank have to hold euro above 1.12, but chances to punch 1.15-1.16 so far a little.

The first tour of Trump as the president was almost without scandals, except the statement to the European allies on NATO about «a debt in $119 billion». The conclusion of the transaction with Saudi Arabia on deliveries of arms almost for $110 billion may be considered as the essential victory. Trump doesn't love and isn't able to conduct a political debate, but he had to discuss problems of climate change and the agreements on free trade with the European leaders who would prefer to deal with his predecessor at the summit of G7. So far disagreements between the USA and other countries concerned practically all questions, except sanctions to the Russian Federation.

Following the results of an OPEC meeting oil lost about 5% in the moment. After the announcement about solidifying of cooperation with Russia, the market expected that the cartel will be more active in support of the prices to level the growing production of slate oil in the USA. According to recommendations of experts, before an OPEC meeting, large investors actively bought up oil, expecting other producers of oil join to the agreement with an increase in the amount of reduction of production, but, without having received expected, preferred to fix profit, as led to a collapse of quotations. Anyway, lowering of inventories is expected and the current price levels it is possible to consider a short-time situation.

Response to the protocol of FRS took place within the general trend of the last three months: the market waited for instructions on increase in a rate at a meeting on June 14 and received them, but additional conditions led to disappointment and closing of longs on the dollar.

The new moments in the protocol can be considered a possibility of installation of the new natural unemployment rate (lower than 4.75%) and discussion of Trump`s fiscal incentives that confirms attempts of FRS action on an advancing. If there is no ratification of tax reform until the end of the year, then the probability is high that FRS this year will raise a rate once again. The Federal Reserve for the first time officially declared step-by-step reduction of reinvestments, the working plan will be provided in the nearest future, the discussion will continue at a meeting on June 14. The chance of an increase in a rate at the next meeting is very high, but the strong NFP for May (with an unemployment rate lower than 4.5%) and any data specifying inflation growth restoration is necessary. Anyway, it is better to trade in the dollar after the publication of an interest rate.

For last week Bitcoin has risen in price by 9%, and for the last 12 months – has grown by 435% (to $2400), but, besides, there was one more fatal event. Two groups of software developers for the production of bitcoins developing different scenarios of development of cryptocurrency have signed the agreement on the opposition termination which was supported by 56 companies (83% of all computer capacities in a network of bitcoin, that is more than 20 million purses and transactions for more than on $5 billion monthly).

The investigation into Trump remains such market joker. Date of hearings in the matter of the former director of FBI Comey in committee on investigation of the Senate will be appointed after May 29. Mueller has refused to provide to the Congress of the USA reports of Comey on his talk with Trump, therefore, there is no serious information leakage. The participants of the market will estimate the probability of Trump`s impeachment according to the Comey`s statements. Confirmation of pressure from the president will be a strong negative for the stock and debt markets, will lead to falling of dollar exchange rate, but without the obvious facts will hardly have long influence.

Current week, in addition to NFP, data on inflation of consumer expenses, ADP and industrial ISM are of interest to the USA. In respect to the Eurozone, it is necessary to pay attention to the first assessment of growth of inflation in May, unemployment rate and final PMI for May, industrial PMI of Britain. We will remind, last week the financial rating of China has been downgraded by the Mood's agency because of growth of a national debt and lack of prospects for the decrease in a debt load. China will celebrate to till Wednesday then will please the markets with the PMI publication. Today in London and the USA – day off, volatility unstable, but is time to estimate a situation and to correct the aim. Ahead – two most active weeks then the markets will begin to be curtailed before summer vacation. 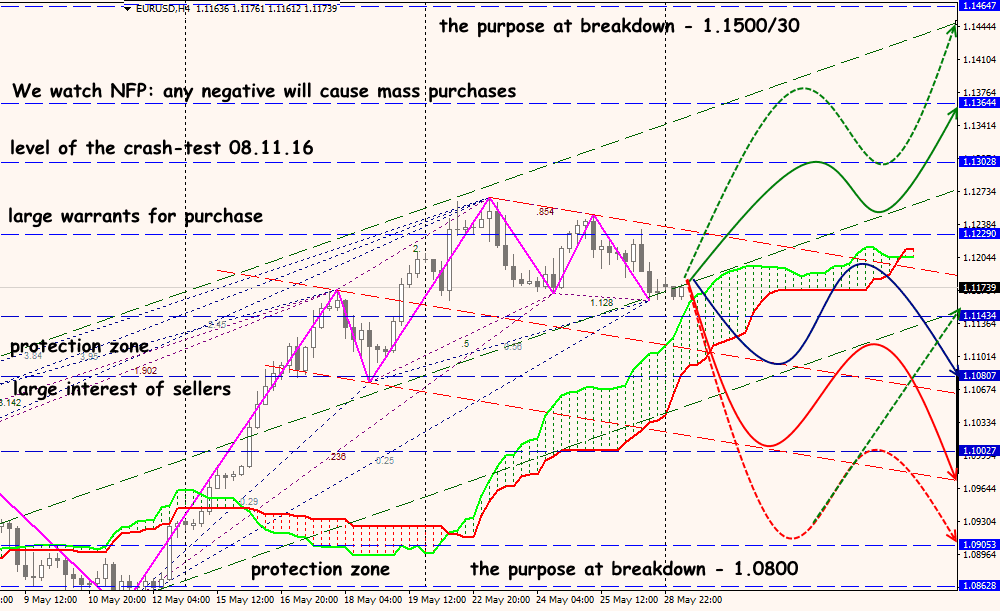 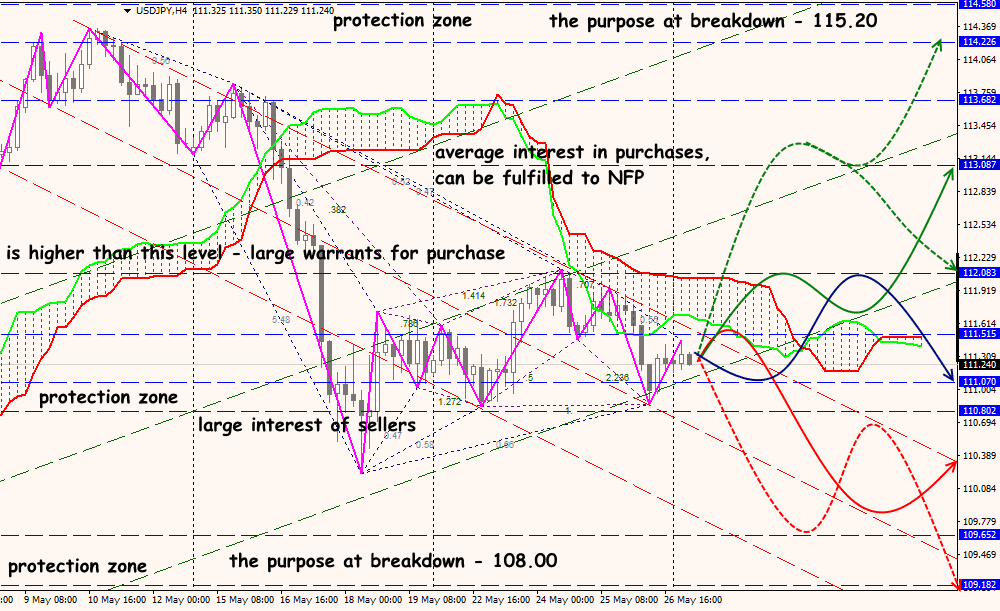