Only Europe generates a positive wave because Germany has fixed the first results, and for Britain, the new ideas have appeared.

The result of a debate between the block of CDU/CSU of Merkel and SDP party of Schultz was the report in which the consensus on all issues of domestic policy is designated, and on the European reforms, Merkel is ready to continue the discussion after consultations with the governments of the EU. Consent to the formation of the European analog of the IMF and possible creation of investment fund on its basis is recorded, but it has been already considered in euro price.

A stable coalition of Merkel and Schultz is optimum for the EU − today Schultz is ready to support Macron's initiatives though he abstains from direct responses so far. In general, the report underlines tendency to a combination of positions of Germany and France, but there are no specifics, therefore, the situation about further integration of the countries of Europe can remain hovered before the summit of leaders of the EU in March. Now SDP of Schultz shall vote at a congress on 21 January and, in case of the positive decision, negotiations on the formation of the coalition will continue in February. If everything goes according to the plan, Germany will receive the coalition government at the end of March.

The main outputs according to the protocol of the ECB:

At the moment the positive for euro and assets of the Eurozone is obviously overestimated. The protocol of the ECB generally did not cost such response, but investors for a long time looked for and nevertheless, made out in the text a reason for purchase of euro. The purpose to tangle speculators and to collect stops above 1:21 is exceeded. If euro goes to a zone 1.22-1.2350 now, then at the expense of the record volume of long items any verbal intervention of the ECB will cause plumb falling at least on 2-2,5 figures. Besides, the meeting of the ECB on January 25 approaches, it is worth taking a break to check Draghi's response before further purchases.

Trump rejected the two-party bill of the Senate on immigration (DACA), in reply legislators can delay negotiations on increase in a ceiling of a national debt of the USA as this agreement is a condition of Democrats for their support during the vote. The problem is complicated by the fact that the uncle Donald requires the active financing of construction of a wall on the boundary with Mexico (private investments did not manage to be attracted). However, the recent emotional comments of the president humiliating immigrants from the African countries and Haiti do a position of Democrats a more uncompromising.

Most likely, the level of a national debt won't be accepted till January 19, the prospect of a short-term extension of financing of the government also weak, but the Treasury will have enough current limit approximately before the beginning of March. The Congress can just ignore Trump's position, at the end of the week, this subject will actively press on the share and debt markets of the USA and, as a result, on dollar exchange rate.

On Wednesday in the morning, Bloomberg has spread rumor that Beijing is ready to stop purchases of the American treasury bonds – an excellent example of political pressure. Members of FRS tried to calm the markets, having reported that intentions of China don't mean immediate actions, and Republicans have said that state treasury bills of the USA are the most reliable investment asset, and persons interested to buy the Chinese volumes will always be.

Nevertheless, when within several hours the U.S. Treasury has offered for an auction 10-year bonds for $20 billion, demand for them has appeared above the offer by 2,69 times. Overnight over Thursday the currency regulator of China called all this history «fake». It is obvious that Beijing just blackmails with the USA after Trump's statement for an increase in duties on the export of China, but such real step from the Asian monster looks quite possible.

Trade wars of the USA with the whole world can become the main driver of the markets in the medium term. The Minister of Finance Mnuchin has already said that the USA will review conditions of the NAFTA trade agreement or will leave it at all, and Trump in a rush of reformatory anger has reminded of a possible revision of the trade agreement of the USA with the EU. The beginning of trade wars will lead to falling of the stock markets, turning of investment risk and hardly someone will remain the winner in this situation.

The pound has obtained a small incentive for growth on the insider on the split between EU countries concerning Brexit: Spain and the Netherlands have supported softer option. The positive has been strengthened by messages that the European Parliament plans to soften the position concerning euro clearing in London as the financial sector has the lion's share as a part of GDP of Britain. The report on the growth of inflation on Tuesday and retails on Friday will correct the market expectations concerning BoE policy.

From other news on Trump's subject we will note:

The markets of the USA have a rest today, liquidity low − favorable day for the technical correction on main assets. The current week it is worth paying attention to the production index of FRB of Philadelphia, data on construction and the Beige book; on the Eurozone – on inflation of the prices of consumers; Japan – on data of industrial output. On Thursday the block of data of China, including GDP growth in 2017, will be published. Important performances of members of FRS and the ECB aren't expected this week, the traditional insider from the ECB is possible in case of a further growth of euro. 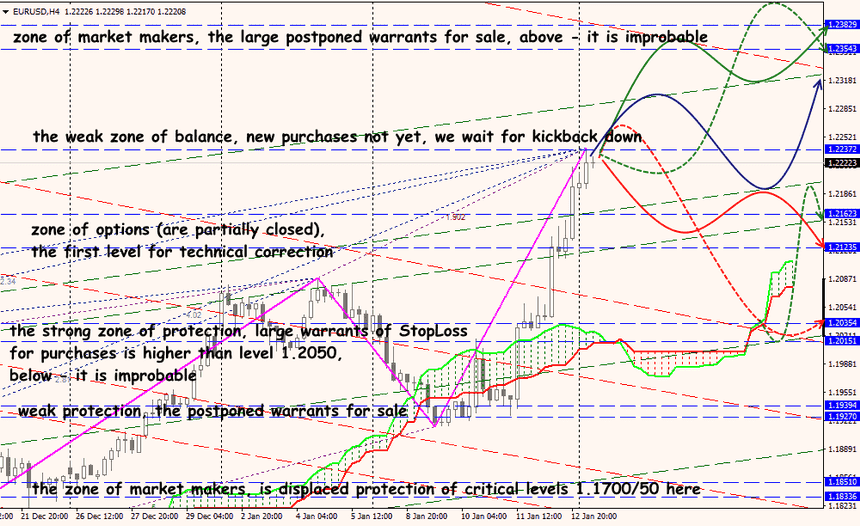 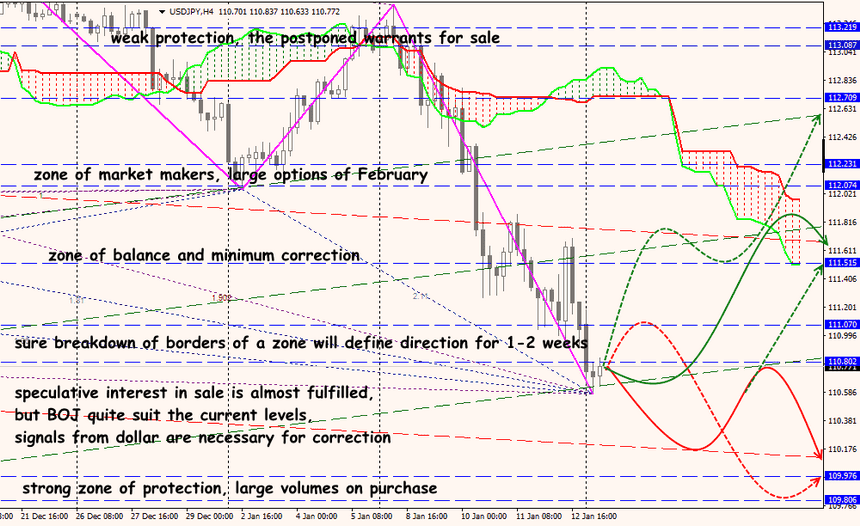