War for NAFTA continues; blackmail of China accrues; the Iranian subject isn't relevant yet; compromise has been offered to London. On the agenda − Trump's fight against Europe.

As a rule, the return of large investors to the markets in September after the Labor Day of the USA marks the beginning of a strong trend. Let`s consider the main painful points.

Canada remained one on one with the southern neighbor. Blackmail hasn't helped Trump: Canada has refused to sign the new NAFTA version with the mechanism of resolution of disputes in favor of the jurisdiction of the USA. Trump doesn't intend to make concessions even in trifles, negotiations will continue on Wednesday, but reaching an agreement is doubtful. Any attempts to exclude Canada from the process and to sign the bilateral contract of the USA-Mexico will be treated by the Congress as the new agreement and Donald obviously not in time with its ratification before elections. So far only the firm bluff is heard: Trump assures that the full text of the agreement will be ready within 30 days.

Recognition of China as the currency manipulator will allow Trump to impose against Beijing practically any sanctions. Increase in duties on import of China for $200 billion is declared to the publication after the end of hearings on 5 September, but without renewal of NAFTA such step is for sure will cause to fall the stock market. The one hope that it is only the next round twitter aggression.

The volume of trade in offshore yuan to couple with US dollar in July has reached a record value of $1.7 bln. The State Council of the People's Republic of China has exempted foreign institutions from payment of a number of taxes on interest income in bond market within the program for inciting of the economy. Thus Beijing hopes to lower the financial load of business approximately by 45 billion yuans ($6,6 billion) a year. We wait for data the Chinese PMI today and on Wednesday, and on Friday − trade balance.

Trump's statements that as the currency manipulator «The EU is not better than China, simply it is less», open the European front of a trade war. The offer of the EU on mutual leveling of duties on import of a car doesn't arrange the USA as Europeans prefer to buy the European cars, and Trump needs the market of agricultural goods of the EU. Only France categorically resists to it, for successful fight Europe needs to unite with China, but the EU isn't ready for it so far.

After numerous attacks of the USA to Europe, Merkel and Macron with a difference of 24 hours have appealed to Europe to achieve wider autonomy from the USA. The situation with Iran forces to think «quicker», active consultations on the creation of own payment service have begun that, in case of implementation, will lead to a loss by a dollar of the status of reserve currency of the world.

The insider about Merkel's readiness to refuse claims for a post of the head of the ECB after Draghi's resignation in October 2019 isn't confirmed yet. About the Eurozone it is necessary to trace PMI of the industry and services, GDP of the Eurozone for the 2nd quarter in the second reading.

The Fitch agency has kept the rating of Italy invariable at the level of BBB, but the forecast is lowered to negative. It is supposed that Italy will remain in the Eurozone, and negative reaction of the markets with the sale of assets will stop the government from an excess of a ceiling of the budget deficit in 3% according to conditions of the EU.

The declaration of the budget deficit for 2019 lower than 3% it will be positively apprehended by both the market, and the European Commission. Violation of this rule is possible only at the resignation of the current Minister of Finance. If Tria is retired or will resign – euro should be sold at once, without waiting for the publication of the budget of Italy or the decision of rating agencies. If the budget is prepared under the direction of Tria – upon the publication it is necessary to expect growth of euro.

The pound has tried to remove feet of sellers above 1:30 after Barnier's statement that the EU can provide «the unprecedented agreement» provided that Britain will remain in the uniform market of the EU, that is will refuse the conclusion of direct trade agreements with other countries. However, Friday negotiations have shown that the government of Britain doesn't intend to refuse easily the «red lines» though probably preservation of euro clearing could pull together positions of the parties. So far, the only change of rhetoric of the EU on softer is obvious. According to the insider, the extraordinary summit on the Brexit on the updated offer of the EU can take place on 20 September. We pay attention to PMI of the industry on Wednesday, and tomorrow are of the interest of hearing on inflation in the parliament of Britain.

NFP remained the only economic release of the USA to which dollar assets can react. All indirect data will be known before the publication, but surprises are quite possible as exactly data for August are most often corrected. The growth of salaries higher than 2,9% will provide to a dollar an impulse to growth as levels Powell's confidence in lack of risks of overheating of the economy and an exit of inflation from under control. The lack of growth will lead to the active decline of the dollar. 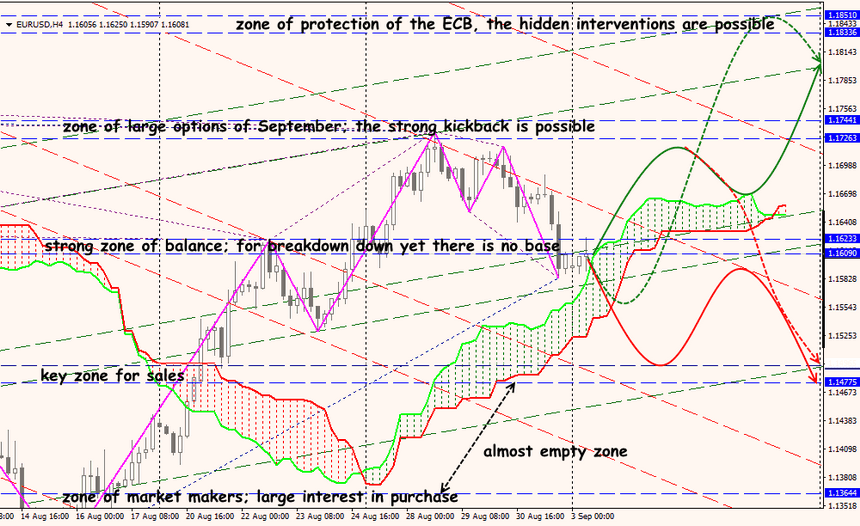 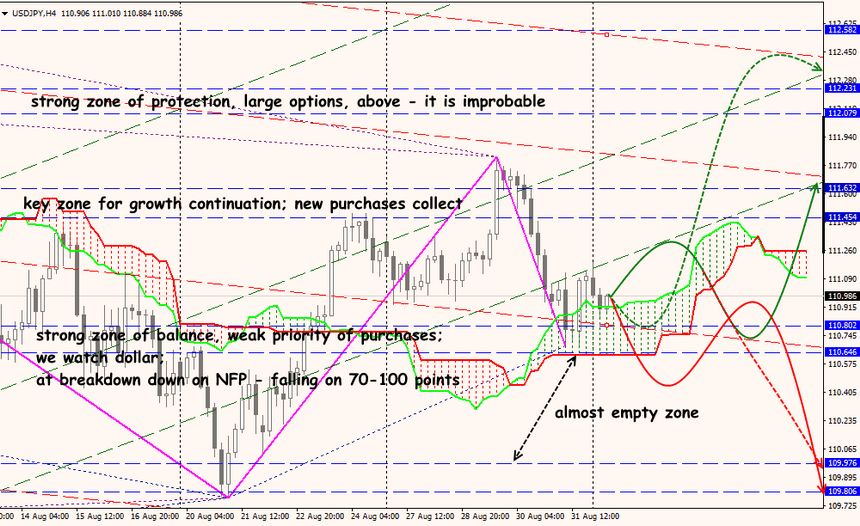