Plans of FRS have appeared above market expectations.

Draghi has again proved the talent of the manipulator; the next step in trade war of the USA-China is taken; Korean "miracle" has come true, but it still not clearregarding profits.

Analysts still argue in what genre − "fiction" or "fantasy" − it is possible to carry the central event of last week: the first dialogue of Trump with Kim Jong-un has ended with signing of the agreement of intent, but real processes will significantly differ from that idyll which has been shown to the world in Singapore.

The American president-businessman has undertaken to present to DPRK security guarantees in exchange for "unswerving devotion to business of a full denuclearization of the Korean peninsula". There is no mechanism of monitoring of nuclear objects of DPRK (as of now!), also as well as procedures of control of external financial flows, but military exercises of the USA, joint with South Korea, are already cancelled.

All this is like a noisy PR action with bonuses for east partner especially as Kim Jong-un has three times ignored questions of journalists of how and when he will refuse nuclear missiles. And though politically Trump has much less time to use result of a meeting, his politicy of chaotic swinging by naval fists at a nose of DPRK after all have forced Kim Jong-un to begin to agree. The world, undoubtedly, has benefited from a meetingin Singapore: DPRK have a real chance to creep out of isolation, the threat of the nuclear conflict in the Far East is still irrelevant.

Following the results of a meeting, except change of rates, FRS has raised forecasts for growth of inflation and have lowered on unemployment rate and also have slightly revised up the forecast for GDP growth of the USA this year. There are no serious signals of change of policy and rate of increase in rates, but September forecasts can be corrected considering opinion of three new members of FRS. If the statistics shows excess of forecasts for growth of economy or growth of labor market will lead to growth of salaries, then it is necessary to expect rapid growth of profitability of state treasury bills of the USA and, as a result, the next wave of growth of dollar.

We will note the main results on a meeting of the ECB briefly:

Investors expected from the head of the ECB of hints on refusal of soft monetary policy, and upon have received both prolongation of the program of quantitative easing, and preservation of policy of negative interest rates. Draghi has assured that the program euroQE will become the ordinary instrument of active manipulations of the ECB.

So nervous behaviour of euro is caused by ignoring of a hawk meeting of FRS by which result short-term speculators used growth of dollar for opening of purchases; but after Draghi it was necessary to fix them urgently. The ECB has secured reaction of the markets by means of short-term intervention in the debt market of the Eurozone.

The government of Germany on the verge of disintegration again because of contradictions of CDU party of Merkel with CSU party. According to the insider, the lack of consent on immigration policy and powers of the Minister of Internal Affairs Horst Zeekhofer, complicates search of a compromise for Merkel, but disintegration of the block is improbable. Any information from this front will cause short-term speculation for euro.

Trade war of the USA-China develops according to the plan. Trump declared increase in the customs duties on 25% for production of China in the amount of $ 50 billion, on the volume of $34 billion – since 6 July. China has announced about introduction of countermeasures on the same volume and threat of additional sanctions actively ignores. The markets expect so far that till 6 July the USA and China somehow will agree, but if it doesn't occur, it is necessary to wait for escape from risk and considerable falling of the stock markets. Remind: the EU is almost confident in increase in duties of the USA for import of a car since fall of this year.

The production index of FRB of Philadelphia, reports on the sector of the real estate, PMI of the industry and services will become the main statistics of the USA. On the EU it is necessary to trace PMI of the industry and a services sector for June; fans of Asian assets pay attention to the protocol of a RBA meeting and also a consumer price index of Japan and Canada.

The forum of the ECB (an analogue of Jackson Hole of FRS) will be a key event of the current week; the decision of the ECB on the termination of the QE program at a meeting on 14 June was obviously made for the announcement of the beginning of normalization of ECB policy on 18-20June. Draghi is going to act three days in a row; Draghi, Powell, Kuroda and head of RBA Lowe's discussion on Wednesday in 15.30 CET is expectedas the most interesting. 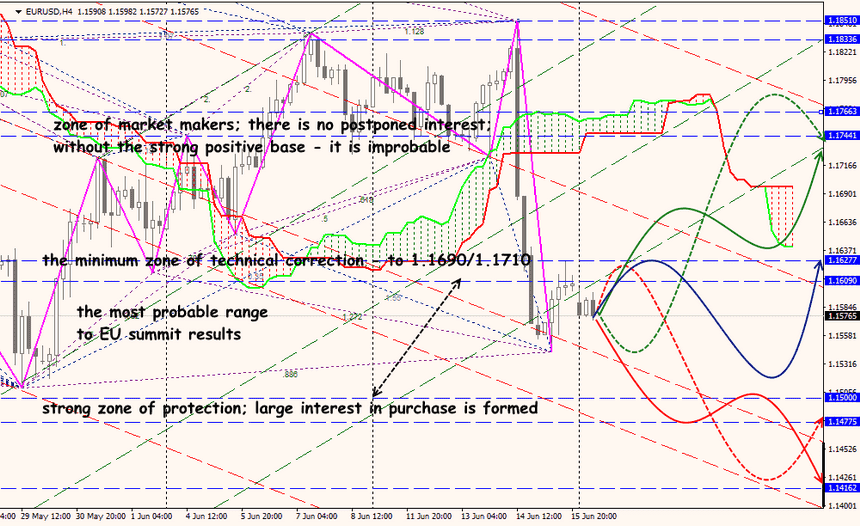 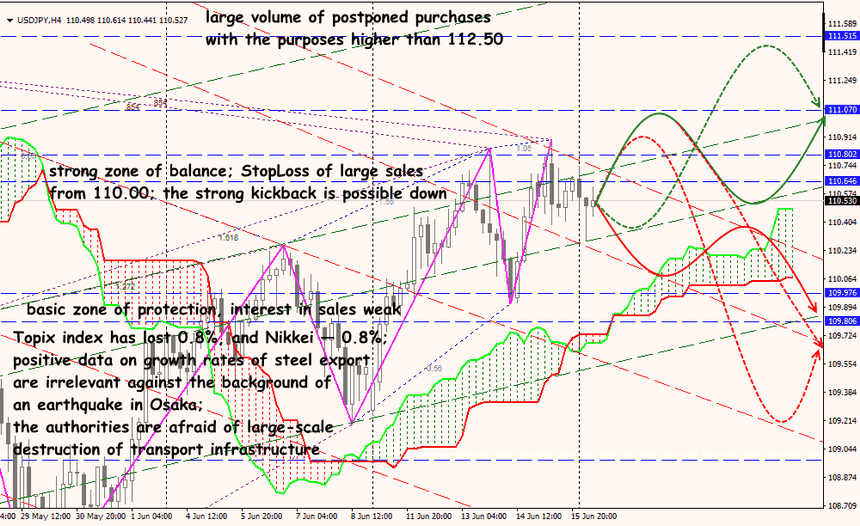