Chaos method as a weapon of market fight

Trump loses control over the ideas; OPEC defends and threatens. Level of a market entropy continues to grow.

The first analysis of judgements speaks about the most probable victory of Democrats in the lower house on the intermediate elections. Loss of control of Trump over the Congress during trade wars will make fears of share crash the come true fact.

The protocol of FRS became outdated at the moment and does not correspond to the current situation, especially the active «bull» performances of Powell before the publication provided an almost neutral response of the market. Investors consider an increase in rates of FRS to a neutral level of 3,0% in the price.

The head of the ECB has reported to leaders of the Eurozone on the steady growth of economy and inflation and has approved the growth of trade protectionism for the role of the main risk. And Draghi's fears are quite clear: judging by Trump's discontent with rates of negotiations of the USA-EU, increase in duties of the USA for import of the cars from the EU at the beginning of 2019 is possible.

Despite the large volume of the insider on moods in the ECB, the forthcoming meeting is expected neutral with invariable basic formulations. Members of the ECB will discuss reinvestments within the QE program as positions strongly differ on duration, need of the Twist program and to change of a key of the capital.

Draghi will make everything that even symbolically not to raise a deposit rate before step down. It is not possible to avoid questions about Italy: it is already known that Draghi last week met with Mattarell and the parties remained are actively dissatisfied each other. To keep back the panic, Draghi either will include the calming rhetoric or will avoid answering to questions.

The Italian banks are so connected with European that even the thought of scales of possible crisis already causes panic. On Saturday Di Maio has quashed rumors about the readiness of the government of Italy to reduce the budget deficit. Moody’s has lowered the forecast of Italy for one step to Baa3 against Baa2 that is only one step higher garbage, but with the positive forecast that so far allows Italy to use the benefits of the ECB further.

Meanwhile, Italians in large quantities convert deposits in euro into francs and transfer to banks of Switzerland. This «trend» reminds a situation of the 2015th when the attack on deposits has nearly rolled a banking system of Greece.

Today we wait for the next reply of the government to the next letter of European Commission then the commission will take a week on thought again though it is obvious that the negotiation process has to go continuously. But the position of the EU is invariable: the budget deficit of Italy for 2019 of 2,4% is unacceptable, and the quicker Italy will concede the better it will be for the euro. Eurodollar will continue to remain under pressure till positive information from the front.

May have not confirmed the agreement reached by negotiation group on last days off. The main problem of the Prime Minister − lack of independence in decision-making. DUP threatens with an exit from the coalition if May agrees to the offer of the EU on the border with Ireland, and eurosceptics of the Cabinet of Ministers of Britain insist on the signing of the agreement with the EU in Canada + style that will lead to existence to customs border within the country. The negative is strengthened by weak current statistics − despite of growth of salaries, inflation has fallen, and retails are much lower than the forecast.

Current week Theresa is a necessary to fight for the Prime Minister's post, deputies of the party of the Tory consider option about a vote of no confidence of May, the decision can be made within 72 hours. But it is more probable that it happens on October 29 in the course of the vote on the budget of Britain. Date of the next summit of leaders of the EU on the Brexit isn't appointed – all wait for the actual progress in negotiations. Actually, leaders of the EU have presented with an ultimatum to London: either the «bad» agreement, or divorce without a new agreement.

The situation with the murder of the journalist Hashogi once again proves that geopolitics already poorly influence raw materials − the markets, in fact, have ignored the Arab-American scandal. Trump tries to derive the maximum benefit. The secret contract under which the USA bought the Arab oil and Saudi Arabia bought up the American papers, has already sputtered out.

The treasury bonds for «only» $167 billion at Saudis hands. If Trump wasn't afraid «to be at war» with China which keeps $1165 billion in reserves then the sum by 10 times smaller will definitely not stop him. Save only military contracts for $500 billion which won't allow losing to the President. Trump's threats have received the aggressive answer on the diplomatic line, but in general, the reputation of the reliable business partner is much more important than political ambitions for Saudis.

The US is trying to disable Iran from SWIFT and threaten sanctions for disobeying. The Iranian export doesn't decrease:

TankerTrackers.com accurately shows that Iran delivered more than 2,2 million barrels/days in the first two weeks of October that almost by 200 thousand bars more, than in September. The scenario which was considered as the most probable is canceled − positive volatility was based only on speculation and bears prevail after all. Oil can fairly fall in price in the next weeks because of growth of stocks and accumulation of volumes of production in the USA especially as a seasonal reduction of demand from the oil processing enterprises will only aggravate a situation. Speculators actively abandon the market.

Trump has decided to break off the post agreement with China (it was effective during 144 years) which gave the chance to the Chinese producers to send to the USA small freights at a discount. Problems now not so much at Amazon, how many at the American consumers.

The Ministry of Finance of the USA didn't call China the currency manipulator in the semi-annual report and the Central Bank of China has continued devaluation of yuan − lower than $7 for the first time in 10 years. But, apparently, Beijing has received a final warning: The USA won't be suffered if someone plays not by their rules. The Asian stock market has grown on the closing of the week, by hearsay – due to active interventions of the Chinese regulator. Trump's administration has confirmed Trump and Xi Jinping's preliminary arrangement during the G20 summit on November 29 and if Donald doesn't refuse a meeting – the subject of trade wars with China will pass into a slow phase until the end of November.

The current week we pay attention on the data from the USA on GDP for the 3rd quarter, durables, trade balance and figures on the sector of the real estate. On the Eurozone, it is necessary to trace PMI of the industry and services in the first reading for October and the IFO index of Germany.

In the ECB week of silence before a meeting on Thursday proceeds, officials of FRS have nothing to report to the markets, but the speech of the vice-president of FRS Richard Clarida on «prospect of economy of the USA and policy of FRS» on 25 October can be interesting. 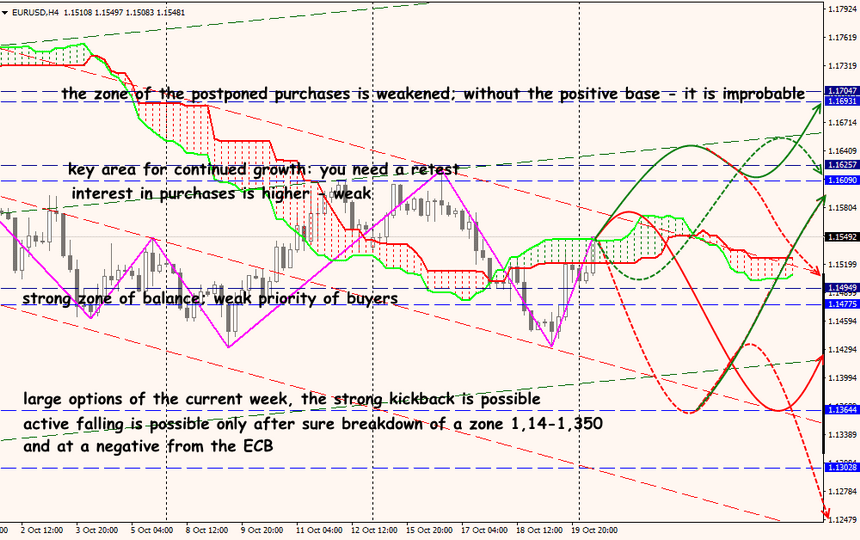 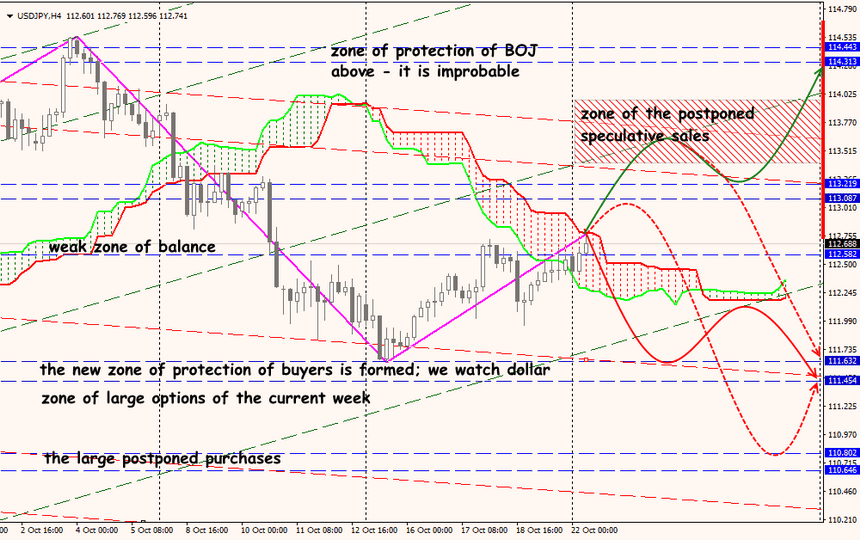