By the rockets to market: the mission is declared and exceeded

The markets rushed about between China, the next attack of a trampomania, the Italian debate, but Syria was the last factor for falling of the stock market.

On Friday night the USA, Great Britain and France have struck the coordinated air blow to the objects concerning production and use of chemical weapon in Syria. Even if not to pay attention to delights in Trump Twitter, apparently, the military action which goal was to lower possibilities of the regime of Assad on use of the chemical weapon has achieved the target. About the victims it isn't reported, production capacities are destroyed. New blows aren't planned, the parties wait in hope to compel Assad to negotiations after all. The market has already worked the first reaction, Mnuchin's performance with the new plan of sanctions against Russia is expected today.

The protocol of FRS was released hawk, though did not lead to the considerable response – the markets were concentrated on geopolitical risks. The most significant looks discussion of the influence of fiscal incentives on the growth of the economy, unanimous optimism on the rate of inflation, risks of trade wars and the increased volatility of the markets, and increase in duties on steel import and aluminum is not perceived as a problem. Any of factors is not considered a hindrance to further increase in rates of FRS.

The special prosecutor Mueller can put some more winning points in the moneybox: the hysteric of Trump on the dismissal of the Attorney-General of the USA Rod Rosenstein only confirms attempts of the president to restrict the scale of the search of a compromising evidence. Trump already agrees to the investigation of communications with Russia, but requires that investigation to be restricted to it. Obviously, there is something else?..

Carrying out a search in the house and office of Michael Coen, the lawyer of Trump, who was accustomed to record talks to clients and the possible exception of such records increases risks of an impeachment to Trump. The publication of memoirs of the former head of FBR Komi adds to this situation special savor. Attempts of revenge of Trump to uncontrollable officials are also negative for the markets and can lead to the short-time decline of the dollar.

But the much bigger risk for the American assets is the intention of the president to reduce expenditures of the budget − the bill can be submitted to the Congress by 1 May. Republicans actively against as the operating project already became a rigid compromise between financial groups so it is unreal to receive a required number of votes in the Senate. However, the idea of abbreviation of fiscal incentives will lead to lowering of forecasts for growth of the economy of the USA.

You should not be under a delusion into concerning the peaceful settlement of the USA-China: the senior sales representative of the People's Republic of China Gao Feng said that the detail and comprehensive plan of counterstroke is ready at China, and official negotiations with the American side were not held. Recently announced measures for extension of access to the Chinese market have no relation to pressure from the USA within the existing trade conflict. Beijing intends further to follow the strategy of Made in China 2025.

The first quarter for euro was unsuccessful, however, in the second, the situation can significantly change. The sale of euro was caused by the protocol of the ECB with the next set of doubts of officials of the Central Bank and even positive comments of Draghi did not help. Against the background of negative macroeconomic releases, the euro accelerated falling to the lower part of the trading range. Today the speech of Prayet, the chief economist of the ECB, is of interest, and from Thursday «week of silence» before a meeting of the ECB on 26 April will begin.

The markets already begin to stake on announcements about the deceleration of growth of the economy of the Eurozone – in that case it is necessary to delay the beginning of reducing the QE program. If the ECB recognizes risks for the economy, then it means that time for normalization of a policy is missed, and no manipulations of Draghi will save the situation.

The European investors count on an increase in a rate of BOE in May, and the pound last week looked best of all the European currencies. He has again ignored weak data of macrostatistics and lack of progress concerning the Irish border and also Barnier's statement that the conclusion of the transaction on Brexit in the next weeks isn't expected.

The additional negative in a subject can be considered the last attempt of the public to stop Brexit: pro-European deputies, business and public figures start the Public Voice company for an additional referendum on the exit from the EU. Officially process starts with a meeting in Northern London in the next few days, but there are no legal chances of success of this idea anymore.

Current week investors will monitor the situation in Syria and to estimate the potential effect of the smoldering trade conflict between the USA and China.

«The beige book» and also mass actions of the various rank of officials of FRS will be the main information of the Federal Reserve System current week. We will remind: the probability of an increase in an interest rate in June is estimated at 95%, on the third increase (in December) – about 85%.

Britain on Tuesday will read data on inflation in March, and further – the report on unemployment and volume of retails – new signals of the influence of Brexit on the economy are possible. In the Eurozone, it is necessary to monitor inflation for March and the ZEW index of Germany.

Surely we pay attention to the Chinese statistics. On Tuesday China the first of the leading economies of the world will publish data on economic growth for the first quarter. The additional block of data as it is predicted, will support positive dynamics of growth (approximately for 6,8%). Besides, investors try to understand what will be a result of a series of mutual threats between the USA and China. Also from the trade mission of the USA, we wait for the publication of the additional list of production of China (for $100 billion) for an increase in duties. 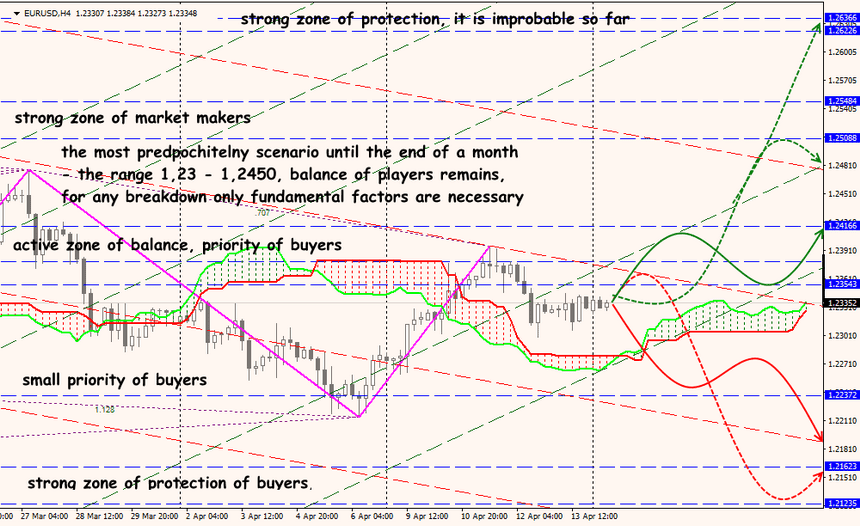 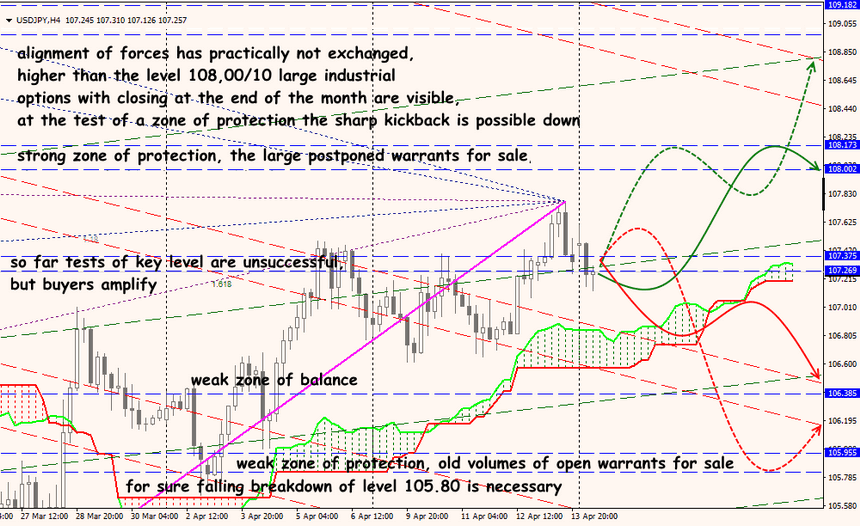