NFP again turned out boring; the agreement with China is not formed; Draghi prepares for the last performance.

The English subject dominates in the market.

Signal votes in the parliament of Britain supported none of the offered options of Brexit, and in general process looks fake cover of the global defeat of May. On Friday conciliatory negotiations with Corbyn are also failed because of May's failure to fix constant membership of Britain in the Customs union. The emergency summit of leaders of the EU will take place on Wednesday, a deadline for acceptance of a final (?) solution on Brexit − on 12 April. For extension of Article 50 regarding the date of an exit, May should provide a request with the justification of extension and a new date of an exit. So far it is about 30 June with the indication of readiness of parties of Britain to take part in elections to European Parliament, but this formulation is already recognized as insufficient by most of the leaders of the EU. Early elections to parliament, a repeated referendum and the other political causes unacceptable for present Britain can be the serious cause for the extension. So far Tusk is ready to offer an extension of Article 50 for a year with a possibility of an early exit on condition of ratification of the agreement and, in general, that suits May.

The only positive in this fight: the categorical ban of parliament on an exit from the EU without a commercial agreement. If the House of Lords ratifies this bill today, then an extension of Article 50 has to be approved by the parliament of Britain after May's return from the summit of leaders of the EU on 11 April. The current week the outcome of a situation, positive for Britain, is quite possible also speculation on the pound too. If Britain, after all, has to leave the EU without agreement, then we will look for pound in a zone of 30-year minima ($1.15 and below) though panic can be exaggerated.

At a meeting on 10 April serious changes in the policy of the ECB and new economic forecasts are not planned, but Draghi's assessment the current situation in the economy of the EU can have a strong impact on euro assets. The ECB already made a decision on the start of the new TLTRO series but did not decide on details yet.

Mario unlikely recognizes the growth of probability of recession, and probably again will remind of labor market growth, but the greatest speculation will be on a subject of the start by the ECB of a multilevel system of deposit rates by an example of BOJ. The ECB obviously prepares for the long period of preservation of rates at the current levels, and practice shows: if Draghi announces something, then a chance of implementation of this offer is maximum. Draghi will attend the summit of the Ministries of Finance and heads of the Central Banks of the G20 which will take place on Thursday and Friday along with the meeting of the IMF.

Despite the advertizing optimism radiated by both parties, the USA and China could not achieve real progress in negotiations on the trade agreement. It is stated that the preparation of the final document requires 4 weeks, and the date of a meeting of leaders will be defined only after that. China will publish the inflationary report on Thursday-Friday and there is a hope that the yuan exchange rate will give much more information on the course of trade negotiations between the USA and China, than any official statements.

The current week data on inflation of the prices of consumers for March will be the main statistics of the USA and the Eurozone. A situation with Brexit is key for the dynamics of a pound, but it is worth paying attention to the block of data with GDP of statistics on Wednesday. 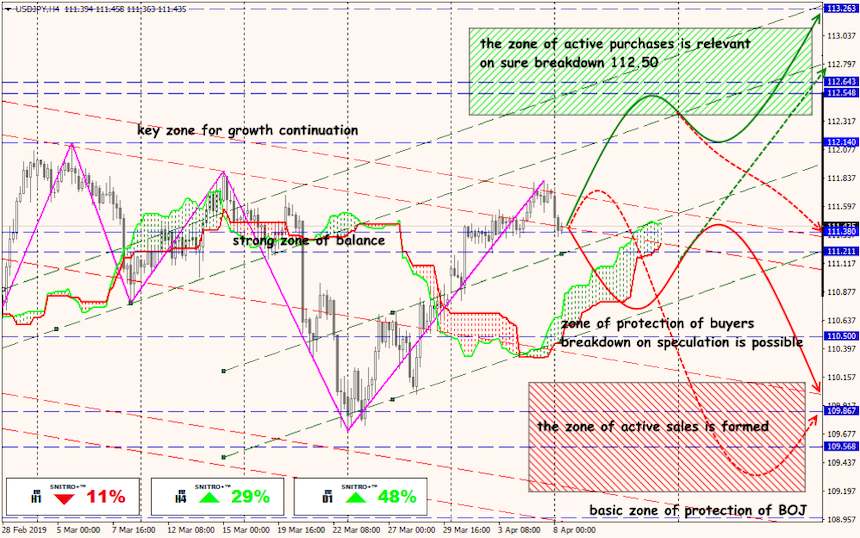