British Prime Minister resigned; eurosceptics became stronger in the parliament of the EU; Trump speculates with false optimism. Oil has worried the worst week from the beginning of the year additional «bonus» to a trade war.

Financial markets experienced another tsunami, the correction affected almost all assets. There were several fundamental reasons, but in fact the excessive overbought was simply closed. So:

May resigns on 7 June, but she will fulfill the premiere duties until the election of the new party leader. She will have to host Trump's visit on 3 June. Change of the prime minister has to take place without early elections to parliament, Theresa will be just replaced by the new conservative who has to be appointed by July 24 – before summer vacation of the parliament.

So far, Boris Johnson is in the lead in a race that does not please euro optimists at all, his hard line on Brexit will be critically negative for pound and euro. Anyway, Britain will leave the EU on 31 October either with a commercial transaction or without it. Rating agencies and banks changed the forecasts having increased chances of an exit of Britain from the EU without agreement.

There is a hope for the current parliament which will not allow an exit without agreement. In general, the situation did not change: the lack of consent between the government and parliament will delay an outcome, but early elections which can be held not earlier than November (at the most optimistic assessment) will become the only logical escape route from the current situation.

Alas, tariffs are not the only weapon of the USA. According to Bloomberg, in the black list, except Huawei, five more Chinese companies to which the ban on purchasing of the American accessories is almost deadly. Moreover, there was a new aggressive idea – the imposition of a duty on competitive devaluation which was obviously prompted to Trump by the American multinational corporations. Corporations complain long ago of «illegal» subsidies of other countries which allow nonresidents to win the competition to the American products in the international market. As the United States Secretary of Commerce Ross said the ban on sale treasuries available to them, will not allow foreign to use the government's currency policy to the detriment of the American workers and the companies. The reaction of politicians of Beijing to this step is not sounded yet.

After fighting moved to the field of technologies, the markets remembered the most important weapon of China in a trade war – deliveries of rare-earth elements (81% of world production). The largest customer on the Chinese raw materials is the Ministry of Defence of the USA – about 10% of global demand, statistically for 2018 (companies Raytheon Co, Lockheed Martin Corp, BAE Systems Plc, Apple), but so far these arguments in a discussion were not sounded.

Trump and Xi Jinping's meeting in Japan on a G20 summit on May 28-29 has to clear further actions though so far there is only an exchange of claims. Considering the fact that Trump is going to announce a package of measures of support of the American farmers approximately for $16 billion (for compensation of possible losses from the reduction of the Asian market), USA does not do serious rates on this meeting.

The result of elections has a postponed effect on the domestic and foreign policy of the Eurozone. The activity of vote was the highest for the last 20 years and was 50.5%. According to preliminary data, the majority is kept by eurooptimists though to keep 376 places the current coalition of European People's Party and to social democrats have to look for the union with liberals and Macron's party. Eurosceptics received more than 100 mandates, for example, the «Europe Freedom and Direct Democracy» Group into which the Italian «Movement of 5 stars» and the British supporters of Brexit enter, will receive 53 places. Today leaders of political groups will begin negotiations on the formation of the majority.

The publication of the protocol of FRS did not cause a strong reaction, risk assessment for perspectives became obviously outdated after the escalation of trade strength of the USA-China. Revaluation of a situation is expected at a meeting on 19 June and will depend on statistics of data of «the first echelon» during a week on 3-7 June.

The surprise in the form of a sharp decrease in PMI of the USA (worse than PMI of the Eurozone) confirms deceleration of economy against the background of weak retails and durable. There will be a little statistics current week: regarding the USA we pay attention to inflation of consumer spending and GDP in 1 quarter; regarding the Eurozone – on inflation of the prices of consumers of the countries of the Eurozone for May. China will please with the PMI on Friday morning. Development of the situation with Brexit will cause active sales of the pound on growth.

China and the USA activate mutual threats, we watch closely for their rhetoric in process of approach of a G20 summit and also behind yuan exchange rate − if the Central Bank of China allows growth higher than 7.0, then the chance of a positive in negotiations remains. Week of silence before a meeting of the ECB will begin on 6 June on Thursday, but traditional insiders are not excluded; any information on the identity of the successor of Draghi can lead to sharp movements of euro. 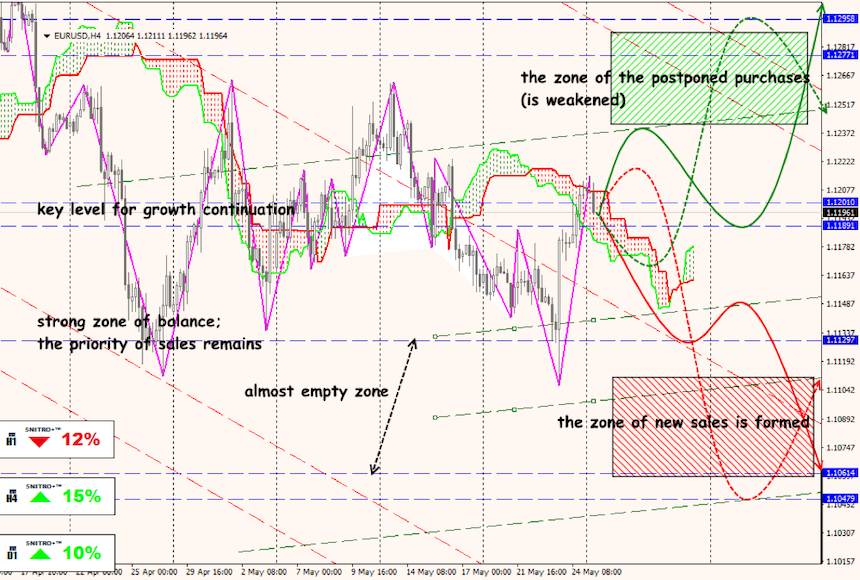 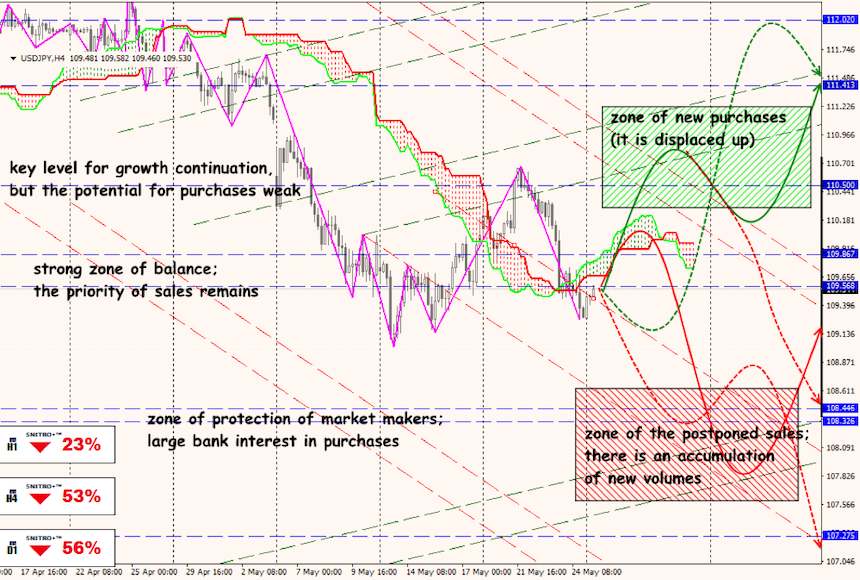