Benefit performance of the ECB or how much for Draghi's smile

As the ECB doesn't change the program, the focus of attention is displaced on a situation in the USA: problem NFP, adoption of the budget, tax reform and elections of the head of the Federal Reserve.

The picture will be added by three meetings of the Central Banks – excellent week for manipulations is expected.

The monetary policy of the ECB is kept on the key moments and strengthened regarding reinvestments and refinancing:

The ECB has stated increase in the volume of QE up to €2,5 trillion that there is twice more initial level and makes more than 25% of the economy of the eurozone. Alternative scenarios of the end of QE and structure of assets within purchases − weren't discussed. Stability of rates of the ECB until the end of 2018 gives the grounds not to consider a policy of the ECB in trade decisions prior to parliamentary elections in Italy.

The first reaction of the markets was positive: the decision of the ECB has coincided with the preliminary insider and basic expectations. But it obviously didn't suit large European players, and, therefore, Draghi was necessary to make a miracle again. He has presented the decision on the beginning of the reduction of QE as usual correction of incentives: internal inflation is insufficient, political risks are unbalanced; global events and growth of euro exchange rate can lead to a revision of forecasts for the decrease. As a result, the happy view of Mario after the press conference has turned back falling almost on 3 figures for euro.

In Germany negotiations of the Jamaica coalition have got stuck on questions of migration and power though concerning integration with the EU it is made serious progress. The coalition has recorded arrangements on finance, the budget and tax policy.

Catalonia has chosen independence at the last minute, but, as a result, has lost even autonomy. The regional parliament is deprived of powers, all power levers in hands of Madrid, early elections − on December 21. Protests, as well as a counteraction to them, remain sluggish, and while no the real victims − the market doesn't react to them. If there is no escalation of the conflict, then in the medium term only negotiations of Germany and France on the creation of the general budget of the Eurozone at the end of December 2017 – January 2018 can exert a strong impact on euro.

The EU suggests reducing a transition period after Brexit from two years to 20 months. On this background, Davies says again that without the signing of the trade agreement London can pass the decision to refuse execution of financial obligations to the European Union.

However a progress minimum at negotiations and attempts of conservatives of Britain behind May`s back to switching process to themselves – already quite a strong negative for pound. The pound has fallen together with euro that was promoted by weak data on retails. BOE meeting will be the main event of the week as his verbal manipulations help royal currency to stay afloat.

The meeting of FRS (on 1 November) is considered ordinary, only the brief statement, new forecasts are published and a Yellen`s press conference isn't planned. It is worth expecting positive rhetoric (GDP of the USA and labor market grow 2 quarters), market expectations on increase in a rate of FRS at a meeting in December are close to 100%. Today it is worth paying attention to data on inflation of consumer expenses.

Reaction to NFP can be difficult. Data have to show the strong growth of the number of new jobs (the negative after hurricanes is compensated) – about 300K and above. If the positive on salaries is confirmed – the growth of dollar will be strong and long, EUR/USD should wait at the levels of 1.12-1.14. If the growth of salaries is weak – only the speculative throw is possible and further, the trend on the dollar will wait for new factors.

The lower house of the Congress ratified the draft budget of the Senate that gives the chance of adoption of the Trump`s tax program by the usual majority − vote is planned in a week. Failures of the first half of the year have tempered the U.S. President, have taught to be more loyal, but have hardly changed him to the purpose. At the end of November, the dollar should remember about a ceiling of a national debt and Trump has to have serious arguments.

The show «candidate» continues: the greatest chances in a race a position of the head of the Federal Reserve remain Powell, but we don't forget that the opinion of the current U.S. President is too dynamic. The decision on the appointment of both candidates (Taylor – on a post of the deputy) will be the strongest politically and will lead to the short-term growth of dollar.

The commitment of BOJ to the principles of monetary expansion heats yen and though researches of JP Morgan say that the gain of the monetary base in the current year will decrease from ¥80 trillion to ¥60 trillion, investors are sure that reduction of the Japanese QE won't be in the nearest future. The next decision of the Bank of Japan current week doesn't promise any surprises. The sure volume of export and an indicator of consumer expenses support the forecast for moderate economic growth, and a decrease in consumer prices is connected with internal factors, such as state coercion of corporations to increase productivity. Nevertheless, it is recommended to study attentively the statement of bank and Kuroda's press conference.

Forthcoming week: on the Eurozone, we pay attention to the growth-inflation data, GDP of the leading countries, unemployment and PMI of the industry; the next portion of quarterly reports of the companies of the USA, in particular, is necessary to Apple, Facebook and Tesla.

To fans of Asian assets, we recommend to don't miss morning publications of the Chinese PMI. China prepares for Trump's visit and for the subsequent negative in the relations, first of all – economic because Celestial Empire isn't ready to sacrifice commercial relations with DPRK yet. 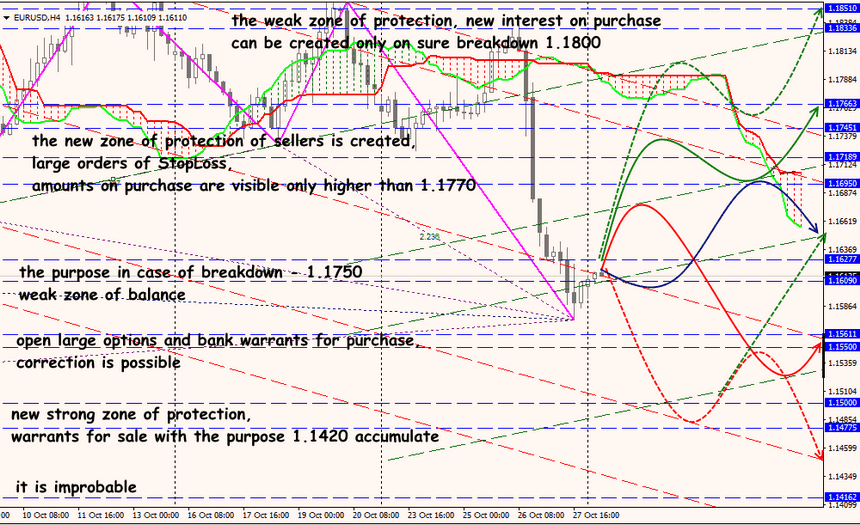 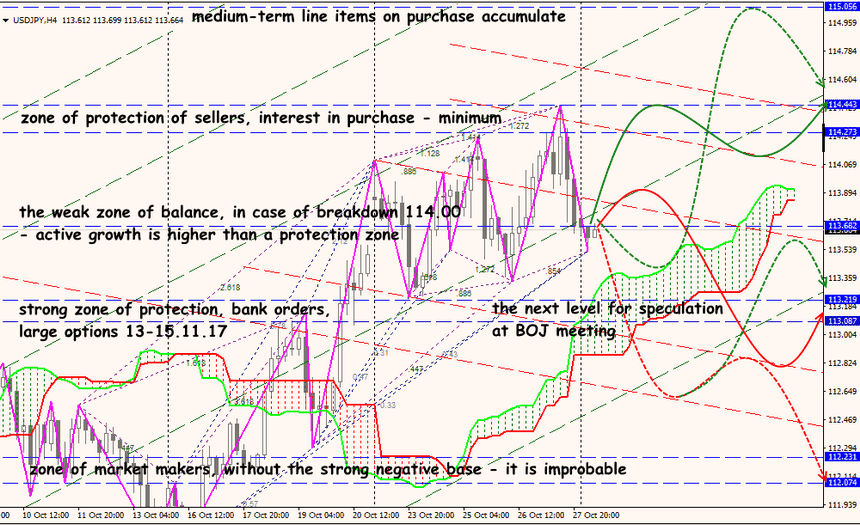