The shutdown is continuing in the USA, but they try to agree with China.

May tries to save Brexit, and Draghi prepares a new portion of false optimism. The market comes out festive hibernation.

The decrease in GDP of the USA in 1 quarter for 0.5-0.7% is the most modest assessment of the negative consequences of stress for the Congress. Trump has to begin the political auction as the rating of the President promptly falls. Federal employees of the critical industries lost the temporary court order, the binding government to compensate them work during the shutdown and continue to work for free. «Hungry» masses begin to come to meetings.

On Saturday Donald tried to bribe democrats by the extension of protection for DACA migrants for three years in exchange for $5.7 billion for the Mexican wall, but he failed. Current week democrats prepare several bills for the shutdown termination, but it is not obvious that the President will sign them.

The meeting of the ECB on 25 January hardly revive interest in purchases of euro, even if negative news on the dollar. Political risks in France, Italy and Britain kill interest in investments, the economy brakes, the basic PMI indexes are lower than 50 points, the northern countries of the union refuse to credit the southern problem partners in a zero rate, the risk of increase in duties of the USA for import of a car of the EU remains.

Apparently, the question of negative rates of the ECB becomes political and after the end of a Dragie`s term in office, the rates will be raised irrespective of economy indicators. The main statistics will be released prior to a press conference, we recommend to listen carefully to Mario though sharp changes in the policy of the Central Bank are not expected.

The ECB plans to make the decision only after new economic forecasts in March. Now it is important whether the ECB recognizes risks as balanced: if yes, that euro receives short-term growth, differently – long-awaited steep falling. According to the insider, the ECB is ready to start the TLTROs auctions on a constant basis to soften the negative effect of end euroQE. Such a step will be moderately negative for the euro, but it, most likely, is already considered in the current quotations.

The shock from the greatest defeat in the history of democratic Britain already passed. Leaders of the EU, taking into account defeat scales, consider the main condition for continuation of negotiations on Brexit achievement of the settlement agreement between the May`s and Corbin`s labourists parties. The probability of the extraordinary EU summit on the British subject is excluded. Barnier is not ready to discuss something until Britain itself is defined what it wants.

Theresa, as well as Trump, will miss a forum in Davos, and today the parliament waits for the alternative plan on the Brexit. But judging by telephone negotiations, the Prime Minister has no new viable plan and voices for ratification of the agreement too. At least, the Irish problem cannot be quickly solved, and without this, it is impossible to move further. Vote according to «the plan B» and to corrections which will allow parliament to take control over the process of an exit is assigned to 29 January.

At the moment investors stay in moderate optimism as the probability of Brexit without agreement decreased, and extension of Article 50 looks almost indisputable. But possible «revolt» of eurosceptics of the Tory and accession to Corbin's party can lead them to early elections, and here then the pound will look for a new bottom.

The markets with optimism perceive any information on trade negotiations of the USA and China, especially the idea of possible canceling of duties on import of China in exchange for guarantees of Beijing concerning long-term reforms. The Ministry of Finance of the USA Mnuchin lobbies this idea, but the US Trade Representative Robert Lighthizer against so far, so a lot of things depend on «internal consent in the White House». The dollar rose even on unconfirmed information on the suggestion of China to increase purchases of goods of the USA by $1 trillion within 6 years to remove trade deficit by 2024.

Protection is issued in the form of quotas for 26 categories of products, 25% duty on the import exceeding these quotas, and restriction of volumes over the countries for the main suppliers. The resolution will become effective on February 4, having replaced the temporary program entered in July.

So truce probability (at least temporary!) in a trade war of Trump with the Asian market actively grows. But China draws attention not only the conflict with the USA. For the last weeks, there was a block of negative data: indicators of foreign trade, inflationary indicators, indexes of industrial production were significantly lower to expected values. Analysts expected a decrease in GDP of China in the 4th quarter to 6.4%, but today data appeared moderate and positive that looks quite strange. Obviously, it was not without deliberate correction of figures so the next portion of statistics essential deviations are possible. It is not expected of comments from the ECB till 25 January. On the Eurozone, we draw the attention to indexes of Germany of ZEWI IFO and also PMI of the industry and services of the countries of the Eurozone for January and the British report on the labor market.

Today the markets of the USA are closed − the country celebrates the Day of Martin Luther King. The current week we wait for the publication of durables, data on sales of housing in the secondary market and PMI of the industry and services. The «silence period» before a meeting on 30 January began in FRS, but if shutdown stops and all missed statistics will be published, it is logical to wait for active performances of financial figures with correction of a position. 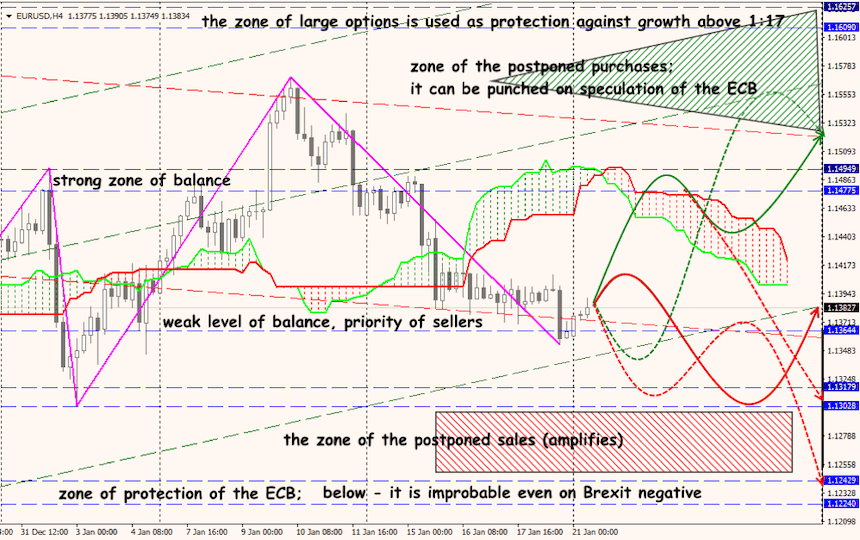 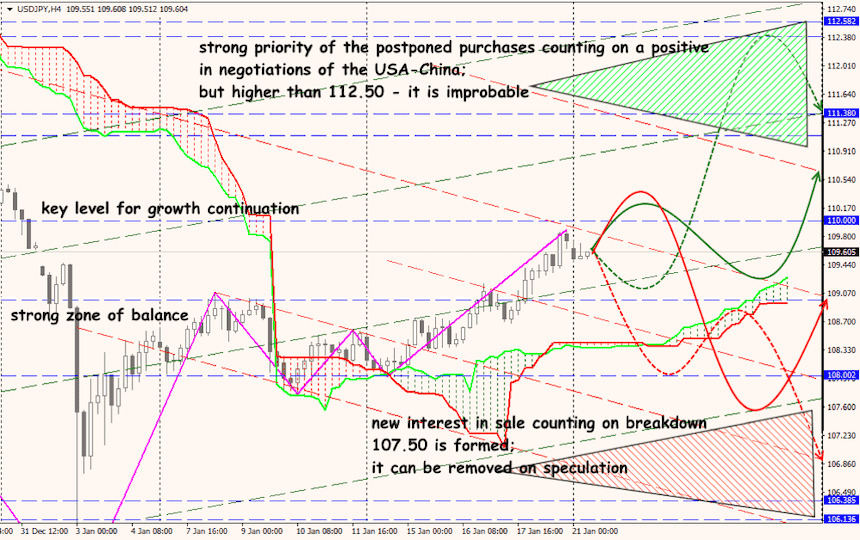