Angels and Demons are dividing the world again

Trump prepares for elections, Johnson prepares for a trade war; Europe is actively seeking money; China hid until November. COVID-19 has already claimed more than a million lives, but the pandemic is no longer a market factor. The focus is steadily shifting to the American elections.

The result of Powell and Mnuchin's speeches in the US Congress can be considered the intensification of negotiations on new fiscal stimulus, which could give $1-3 trillion. to restore the economy. Trump has publicly agreed to $1.52 trillion, the final Democratic bill is demanding $2.4 trillion, but Senate Republicans are actively opposed to that amount. Negotiations between Democrats and the White House administration continue, but without Trump's intervention, the chances of a real document being adopted are close to zero.

A new scandal in the US Senate sparked Trump's decision to appoint Amy Coney Barrett to the Supreme Court to replace the recently deceased Ruth Ginsburg. The 48-year-old favourite of religious conservatives will certainly strengthen support for the incumbent ahead of the elections. The process of approving Barrett's candidacy in the US Congress may begin on October 12 − this will be the third Conservative judge appointed by Trump to such a serious, and most importantly, life-long position. The Democrats have already declared a violation of the principles of electoral law, but they have no legal methods to interfere with this process. So if the case about the election results does get to the Supreme Court, it is Trump who can count on a decision in his favour.

What awaits us this week?

Trump is «not sure in advance» of the fair outcome of the election and, in case of failure, is ready to challenge the result. The same was recently stated by his counterpart Joe Biden, so that after November 3, the country may receive an empty judicial marathon instead of the president.

According to the script of the debate, the «contestants» are offered 6 topics (for each − no more than 15 minutes); the most negative topic for Trump will be the COVID pandemic, for Biden − the economy, taxes and corruption. Immediately, we note that Biden is weak in the topic of economics, and Donnie intends to prove to the electorate Biden's inability to hold the post of US president due to the lack of «sharpness of mind.» And do not count on a polite tone, logic and the absence of «dirty» tricks. The stakes are too high.

The first campaign show could lead to dramatic changes in the ratings of presidential candidates, which will have a significant impact on risk appetite. Strengthening Trump's position will be accompanied by a rise in the stock market against the backdrop of a fall in the dollar − a special gift could be the president's sudden consent to a $ 2.4 trillion Democratic stimulus package. Biden's conditional «victory» may intensify panic sales.

Instead of a Brexit deal, the UK is preparing for a trade and political war with the EU. Nobody believes Johnson, and his methods are unambiguously interpreted as blackmail. Europe considers it necessary to close the Northern Ireland window to protect itself from the flow of illegal immigrants and contraband in both directions, and will do so at any cost.

If London is ready to violate international law and already signed agreements, Brussels will apply to the European Court of Justice and issue the necessary decision as soon as possible. The British economy, weakened by the pandemic, will receive harsh sanctions, and «turning them off» will be much more difficult than simply «firing» Johnson.

None of the potentially positive insiders was confirmed, Barnier did not comment on the situation, the head of BOE Bailey said again that negative rates are not excluded.

The result largely depends on today's discussion of the UK Home Market Bill at a joint committee meeting. A breakthrough in the negotiations (fantastic!) will lead to a vertical rise in the pound. If there is no clear progress by Friday, the EU is speeding up preparations for a tough Brexit and the pound will have no other way than down.

A press conference by representatives of the EU and Britain is scheduled for Friday, but insiders will appear constantly.

Now it is the maximum employment that is the main task of the Fed, and the growth of inflation is shifted to the background. The Fed meeting in December will be decisive for the renewal of the QE strategy, and the dynamics of the labor market recovery will be considered as a key factor.

Until the time of the NFP, market participants will not receive all indirect data (ISM services published on October 5); the focus will be on job creation and unemployment rates. To maintain risk appetite, job growth above 1 million people is required, the positive will be strong if the unemployment rate U3 falls below 8.0%. NFP worse than forecast may lead to a speculative fall in the dollar.

On Thursday, the EU leaders' summit will take place in Brussels. Recall: a plan for issuing a new debt of €750 billion has already been agreed, a key element of which is cash grants (€390 billion) for the most affected countries. Alas, such support means new economic «sacrifices» of the more prosperous members of the union, in particular, Germany, Austria, Denmark, Sweden, the Netherlands will lose about 2% of GDP in 2019.

However, in its regular report, the ECB calls on Brussels to make the economy support fund permanent and believes that such a financial asset will help not only recovery from the pandemic, but also increase the potential for economic growth in Europe. So the documents and comments from the summit can be quite interesting.

The FRS officials will continue their mass protests, but it is already clear that without a new package of fiscal stimulus by Congress, September forecasts for US economic growth will be revised downward. Tomorrow is worth listening to Vice President Clarida's talk on debt sustainability. Comments after the NFP will have a greater impact on the markets.

ECB President Lagarde will address the European Parliament today and at the ECB conference on Wednesday.

If the US data does not prove to be a failure, then its impact on the markets will be short-term. 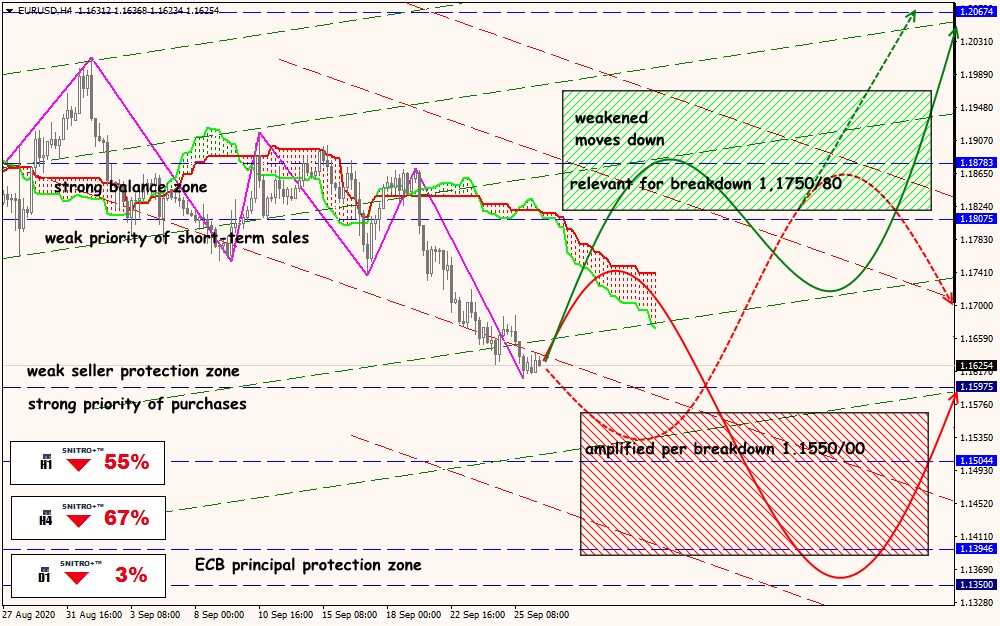 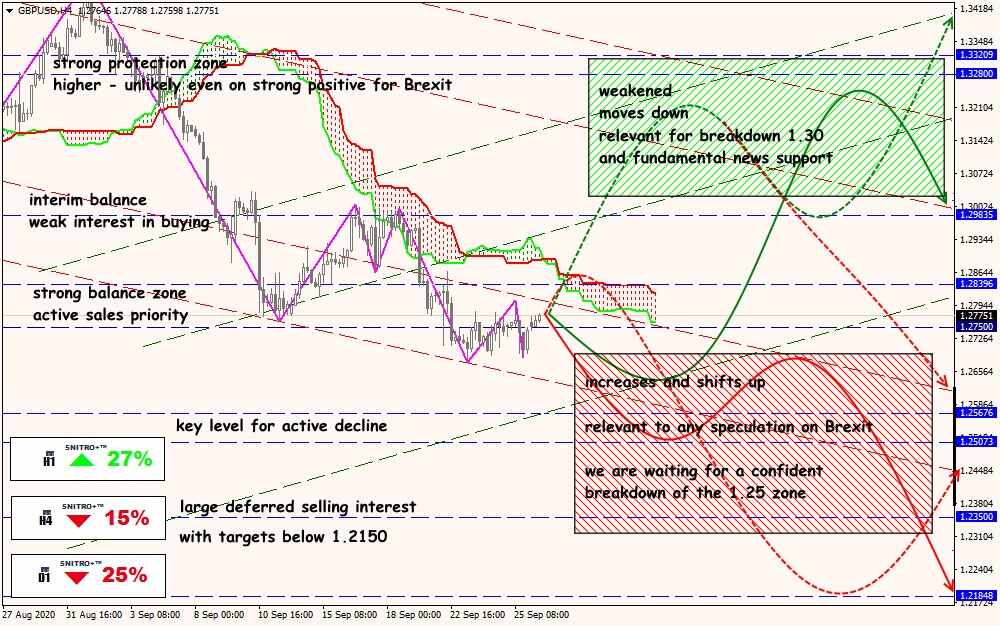 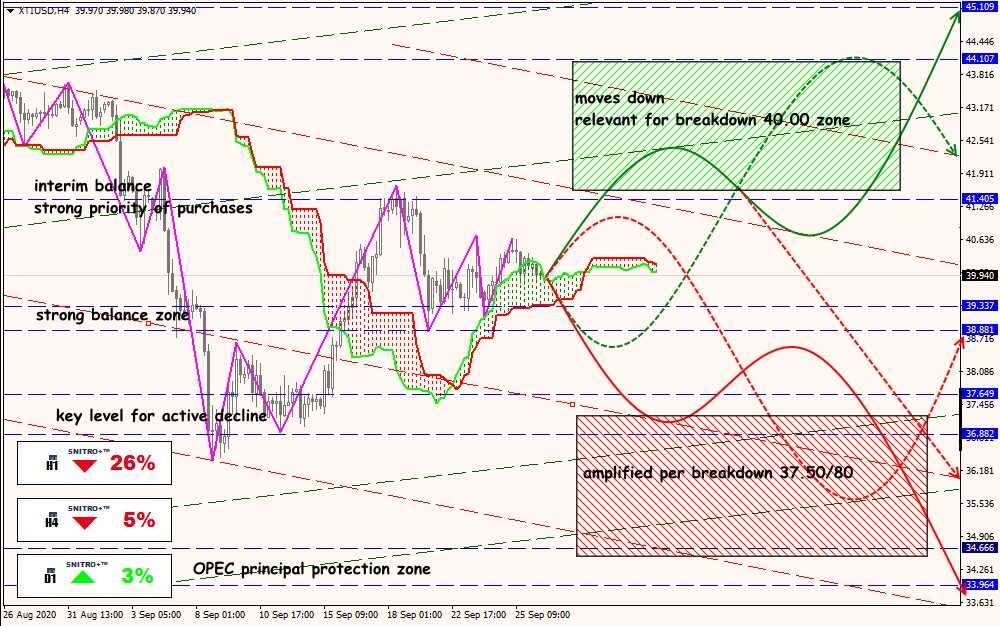