All quiet on the western front: war of nerves continues

FRS, BOE, NFP – the market was indifferent to these events.

China with a problem of the growing yuan is in the center of attention, Trump with new duties, Italy with the new budget. The parties accumulate forces for the new attacks.

Let`s remember the main events before the main military review:

The meeting of FRS was unremarkable, there were no new ideas in the accompanying statement, vote for the preservation of a rate invariable was unanimous. Powell's comments on Trump's attack on the independence of FRS are postponed until September, but it is already obvious that the Federal Reserve System doesn't feel special «fear» of the president.

Several minutes prior to the publication the press secretary of the White House Sanders announced an evening press conference at which the statement for new duties on import of China was planned. Rumors about the correction of the customs duties from 10% to 25% circulated since the beginning of the week so this demarche has only displaced focus of attention of investors. Reaction to the decision of FRS was blurred, but market expectations remained invariable.

Same colourless was July NFP: the strong data confirming the growth of the economy of the USA, but without surprises. Preserving the dynamics of lowering unemployment rates once again shows that the policy of gradual increase of rates justifies itself. But while there is no obvious growth of salaries – both Trump, and FRS can sleep peacefully.

BOE has raised a rate, but quite expected Carney's phrase that normalization of policy will happen «slow steps, but not run», has led to steep falling. Such reaction has been generally caused by positions of large players on fixation of profit on pound longs on the growth after an increase in a rate.

It is obvious that there won't be the following increase in a rate of BOE before reaching an agreement on Brexit, and if it won`t be reached Carney promises a decrease in a basic indicator. At the moment there is no progress in process of a divorce though the rhetoric of negotiations Britain-EU became more constructive after Davies's resignation, the new round has to begin in the middle of August.

We wait for new drivers from Italy: the decline of euro at the end of the last week is connected with meetings of the government of Italy on the coordination of the budget for 2019 in which the first steps on the execution of election pledges, in particular concerning reduction in taxes and pension reform have to be designated.

The yield on state treasury bills of Italy have grown, the spread between profitability treasury securities of Germany and Italy has extended to the maximum values. Investors are afraid that violation of the rules of the budget deficit will lead to the new conflict of the government of Italy and with leaders of the countries of the Eurozone. The budget will be submitted in September and before the assessment of the document by the European Commission euro will be under the descending pressure. The first revision of rating of Italy from Moody’s is expected on 7 September. The internal conflicts of Merkel with colleagues and opponents don't influence foreign policy so far, but information from this front is recommended to be controlled. SDP party has stated that continuation of the conflict between CDU and CSU can lead to disorder of ruling coalition of Germany, it is obvious that SDP party at a good choice of a right moment can become the winner in this situation.

After all, bad knowledge of the economy has led down Trump. The president demands depreciation of the dollar, but in response to the escalation of trade war the American currency only grows:

Besides, the speed of increase in a deficiency of the American budget grows at disturbing rates. The U.S. Treasury declared that in the second half of year issue of a debt will make $769 billion that it is much more than was planned. Tax eases of Trump lead to a reduction of receipts in the budget, forcing Washington to borrow constantly money in the global market. Apparently, isn't lack of time for the president for these problems.

As speak in China: plans are a good breakfast, but a bad dinner. There were first victims of raider policy of Trump – the American farmers. Mexico has begun to look for alternative suppliers of raw materials to hedge risks of a possible rise in the price of grain from the USA. It is a reasonable insurance in case the authorities of Mexico in response to the American economic aggression will decide to impose with tariffs any import from the States; by the way, the most convenient options of deliveries at the price were already sounded by Russia.

Last Tuesday Donny has even offered domestic farmers the emergency financial aid in the amount of $12 billion to help them to have hard times. However, the Congress was shocked by such an invention and hasn't supported the initiative of the president.

The Chinese data appeared much lower than the forecast, but the government states that pressure from the USA is incapable to exert an impact on the plans for GDP growth submitted earlier. The Central Bank of China has raised obligatory reserves to 20% upon purchase of foreign currency and so far the market hasn't fulfilled this fact. Beijing considers critical yuan exchange rate at the level of 7.0-7.05 and constrains attempts of growth in all available ways.

After Trump's order to study a possibility of increase in the customs duties on import of China for 25% for the volume of $200 billion it became clear that this American increase in duties will be the last; Lighthizer has prolonged order taking for hearings till August 13, and hearings will be finished on September 5.

Nevertheless, the Chinese threat to enter new tariffs (from 5% do25%) concerning the American goods for the total amount of $60 billion isn't canceled yet. Kind of analysts didn't try, but it is still far from a victory in this war. The beginning of real negotiations between the USA and China will increase appetite to risk in all markets.

The current week will be less saturated, key data of the USA can be considered the report on inflation of the prices of consumers for July. On the Eurozone of important data it isn't expected, but it is worth paying attention to minor data on Germany and the USA, in particular, the level of vacancies of labor market JOLTs and wholesale stocks. Significant performances of figures of FRS and the ECB aren't expected. 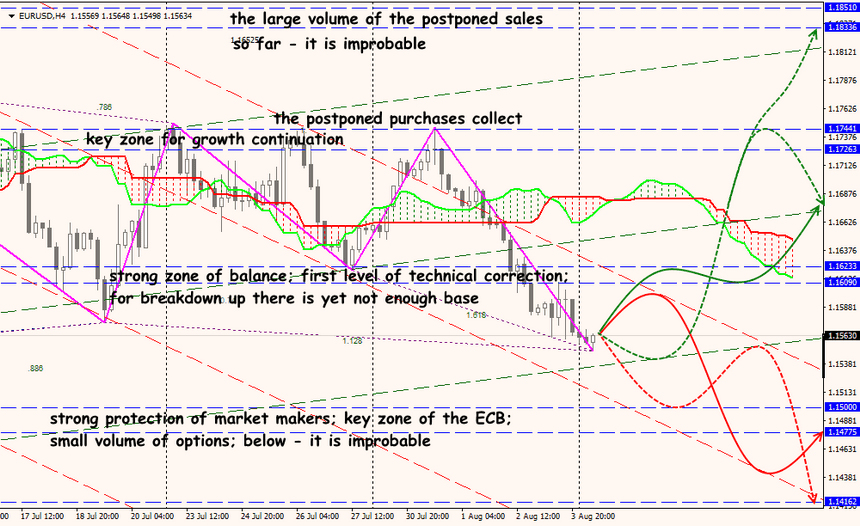 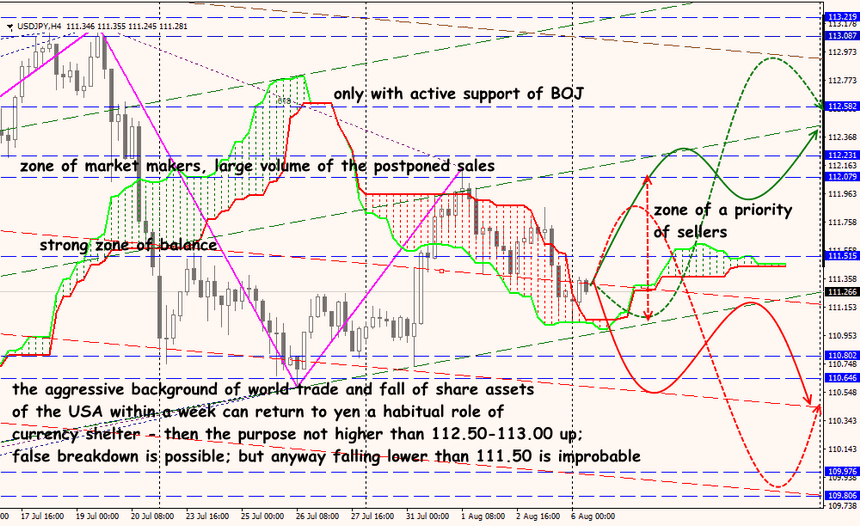