The advice of the day: don't prevent to sell dollar!

The IMF has supported incentives of the ECB; euro celebrates the anniversary of «flight of a bumblebee».

The dollar has again sunk against the main currencies after data on growth rates of economic activity. The meeting of FRS was pigeon concerning inflation and hawk concerning the time of balance reduction start. Yes, the regulator has positively estimated dynamics of the American economy, but so far inflation doesn't wish to grow, investors will sell to some extent dollar and the Federal Reserve System has no forces to affect it. A formulation «relatively soon» concerning rates the market has regarded as the direct instruction on a meeting on September 20. The reaction of basic currencies to FRS was spoiled by the ECB in the person of Nowotny who for half an hour before the release of FRS has reported that the European Central Bank should give a more obvious signal of the beginning of turning of incentives. Market expectations to increase at a rate of FRS in December have fallen lower than 50%.

The national debt ceiling can become the only obstacle to reduction of FRS`s balance, but the problem has to be solved till September 20, otherwise, Trump will become the president at whom the technical default will take place. However, Donald is no a stranger to bankruptcies and such show can be fascinating. Trump has suffered one more defeat: the senate of the USA has voted against all bills on health care reform. The lower house also hasn't managed to approve the draft budget, but the refusal of the speaker Paul Ryan of a boundary tax increases chances of ratification of tax reform by the House of Representatives. The political crisis in the USA will continue to exert a negative impact on dollar before the end of the investigation of Mueller.

In response to Trump's threats «to dismiss all», including the Attorney General, the Senate of the USA plans to submit the bill according to which the special prosecutor can't be dismissed at investigation concerning actions of the president or his assistants.

The well-known speech of Mario Draghi about the rescue of euro was 5 years (on July 26, 2012) last week – analysts still consider at that time in particular that speech saved the eurozone from disintegration against the background of the aggressive growth of yield on peripheral bonds. And today his comparison of euro with a bumblebee («shouldn't fly, but flies») is quite relevant − the ECB has acquired the status of the regional bank supervisor, but integration at global level remains a problem. The regulator too depends on the program of buying up of assets which have increased the balance of bank to €2,3 trillion, and the problem countries can't refuse cheap loans and aren't ready to unpopular economic transformations.

Euro has practically ignored statistics on France, inflation in Germany and on the level of credibility in a business community of the eurozone, though, economic confidence in the eurozone has unexpectedly improved in July almost to a ten-year maximum. The European Commission plans to submit the following long-term budget of the EU in the middle of 2018, and it is supposed that payments from Great Britain till 2020 will make €10-12 billion. At the moment euro remains extremely overbought and is ready to fall on any negative.

The winner of last week can be considered pound though the prospect of an increase in rates before a meeting of BOE decreases after a release of negative economic data. The index of trust of the British consumers for July has fallen to the minimum level recorded after Brexit. There are no doubts that growth of the British economy is slowed down, and this tendency will proceed in the next months while there is a preparation for an exit from the EU, and therefore the pound should be sold in a case of strengthening, especially against euro.

Kuwait is ready to join the agreement of OPEC on oil production reduction. The indicator of production of OPEC for the current month will become an important factor of pressure upon the oil prices, the publication of Reuters is expected recently. Representatives of some participants of the agreement of OPEK+ plan a meeting on August 7-8 in Abu Dhabi to discuss an issue of incomplete implementation of the obligations by them. Kuwait and Russia will preside, as expected. The problem is that controlling the course of implementation of the agreement, cartel, except own statistics, uses data from so-called «secondary sources» of which inaccuracy the participants of the agreement suspected of incomplete implementation of the obligations (Algeria, Venezuela, Iraq) especially complain. According to IEA, obligations are fulfilled in June only for 78% against 95% in May. Oil will experience results of a meeting by the time of fixing of large options on August 8-10.

The current week we wait for traditional ADP, components of employment of reports and ISM Nonfarm Payrolls, the labor market remains a subject of pride of FRS, the failure report is improbable. The only strong growth of salaries higher than 2,8% by a year can become a factor for a sure turn of a dollar trend up. The big block of data on the Eurozone data on inflation, unemployment rate, GDP and PMI of the industry and services, BoE meeting on Thursday is expected.

The next aggravation across Northern Korea can have negative consequences for the trade of the USA and China – it is worth paying attention to data of PMI in the morning of Monday, Tuesday and Thursday. On Wednesday the intermediate meeting of the ECB will take place, traditional verbal interventions by means of leakage of the insider in media are possible. 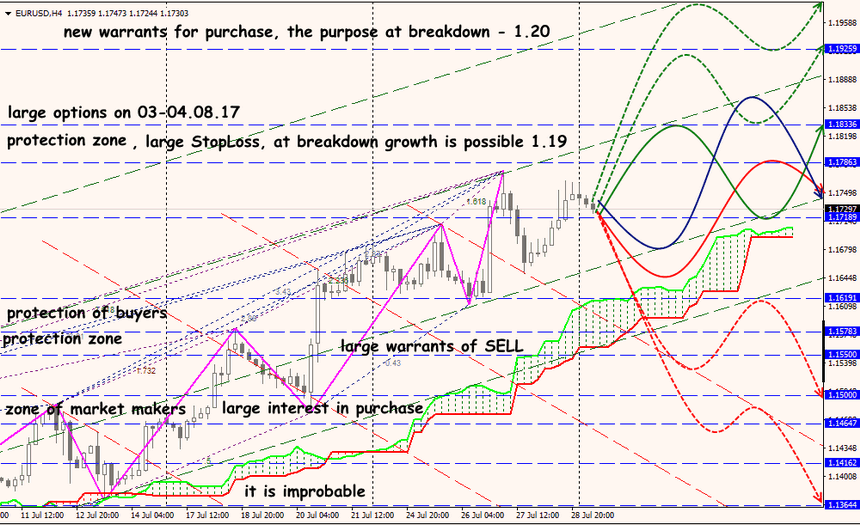 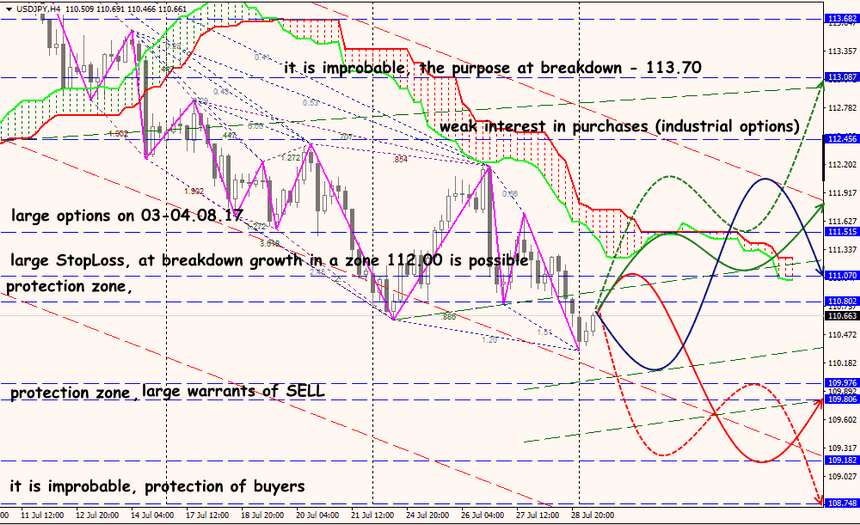