Active February: permanent wars without the victims and winners

The next week of madness in the markets is closed. Trump prepares duties on import of steel and aluminum.

Europe was got involved in a new scandal with London; the yen continues to try the patience of the Japanese officials.

The dollar has updated three-year minima to a basket of currencies, the macroeconomic statistics strengthens expectations that the ECB and BOJ will soon be developed from mitigation policy to normalization. The yen has shown max in 15 months and seriously beats stocks of the large companies, however, some investors have preferred to lock in profits before days off in the USA. Signs of restoration of the dollar aren't visible yet; there is an opinion that purposeful competitive devaluation is conducted (see Mnuchin's statements at the end of January).

Trade wars and investigation of the special prosecutor Mueller remain the main American subject; and also the announcement of a name of the vice-president of FRS. If the USA is able to include in trade contracts (at least NAFTA) a binding to exchange rates, then this fact will be key for a conversation with Japan and the EU.

The Senate of the USA has rejected all bills on immigrations, and Trump's project – is unconditionally, and the two-party bill of the Senate – after the president has promised to use the veto. It means that all following Trump`s bills will face rigid opposition from Democrats. The bill on investments into infrastructure according to which $200 billion have to give inflow of investments of $1.5 trillion, in general, is perceived as propaganda «schtick» of Trump before intermediate US congressional elections. After the publication of the draft budget for 2019 media have nicknamed Trump «king of a debt»: the sum of expenses will be $4.4 trillion.

The protocol of FRS of 31 January became strongly outdated. Special attention should be paid to arguments on an acceleration of growth of inflation owing to a devaluation of the dollar and a reasoning concerning overheating of the economy owing to start of tax reform. Anyway, the influence of the protocol on dynamics of the markets is restricted.

The new head of the Federal Reserve – not the economist, has no strong beliefs by the monetary principles (unlike Yellen), is afraid of falling of the stock market of the USA, and, at least – morally, depends on Trump. The judgement of investors will be created after Powell's performance in the U. S. Congress on 28 February and meetings of FRS on 21 March with new economic forecasts. At the moment the maximum of attention of investors is drawn by an increase in duties of the USA concerning import of steel and aluminum that, first of all, will strike a blow to the economy of China and Germany.

The growth of inflation in Britain above expectations, but economy continues to fall, so you shouldn't expect on the fast increase in rates of BOE. The pound was slightly nervous on the statement of the representative from the EU Michel Barnier that negotiations on Brexit are suspended; Merkel and May will hold bilateral negotiations and a press conference on Friday.

The conflict on the special commission on trade disputes with London develops in the sphere of mutual recriminations: Britain considers these attempts discrimination, and Europe is afraid of the competition from the British export. Blackmail by payment for a divorce doesn't bring result yet though the financial question is extraordinarily important for the EU (without the contribution of Britain there will be no planned budget!). In this war, Britain, most likely, will win that it will lead to the growth of pound, but so far this issue isn't resolved – the pound won't go actively up.

Al-Falikh's statement that it is better for member countries of the agreement of OPEK+ to allow small deficiency in the market, than too early to appear the Vienna transaction, tries to press on the prices, but still unsuccessfully. The weakness of dollar helps the oil to keep positions; a gap between the prices of the American benchmark and world oil quotations – minimum from the moment of the hurricane Harvey. It does it attractive to foreign purchases, and therefore export carries out a role of «valve» of dumping of excessive pressure for the American oil industry workers.

The first three days of the current week will come under the influence not only Asian, but also American holidays. Today the most interesting statistics will come from Japan: the trade balance and export/import − rate of the yen has a chance of growth continuation. There will take place the meeting of the Ministries of Finance of EU countries In Brussels − the prospects of inclusion in the EU of six Balkan countries can be discussed, influence on euro – feeble.

Protocols of FRS and the ECB, more possibly, will be in favor of growth of dollar/decline of euro. The text from the ECB on Thursday will include discussion of euro exchange rate, leakage of «insider» after the intermediate meeting in Wednesday is not excluded, especially, if euro exchange rate will be rather high. On the agenda − parliamentary elections of Italy and vote of SDP party of Germany on the coalition with Merkel's unit. The meeting of the ECB on 8 March can give an unpleasant surprise on revising of forecasts for inflation growth down against the background of waitings of deceleration of GDP growth owing to export falling.

Pay attention to statistics on retails, labor market, GDP and the report of BOE on inflation of Great Britain (probability of growth of pound – high) and also in Europe – to the ZEW and PMI Markit indexes; on Thursday USA will publish the unit of PMI Markit data. The response of dollar to the strong data will be short-term, feeble data can accelerate falling. 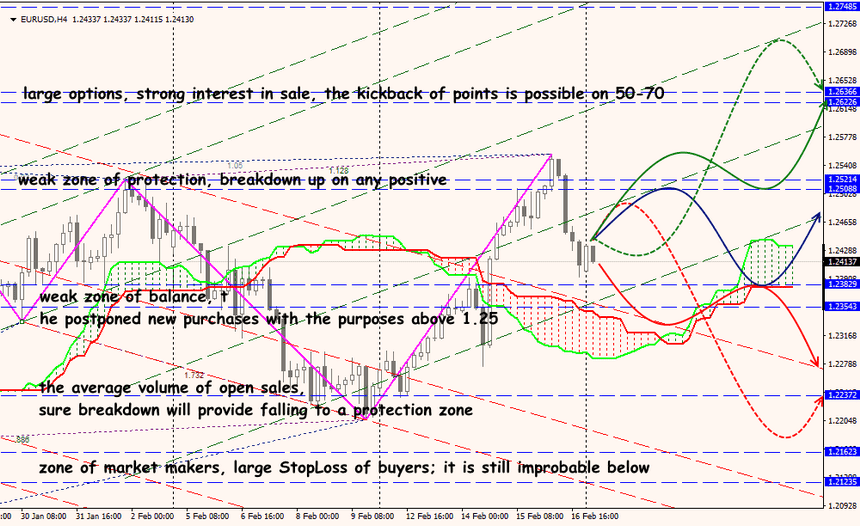 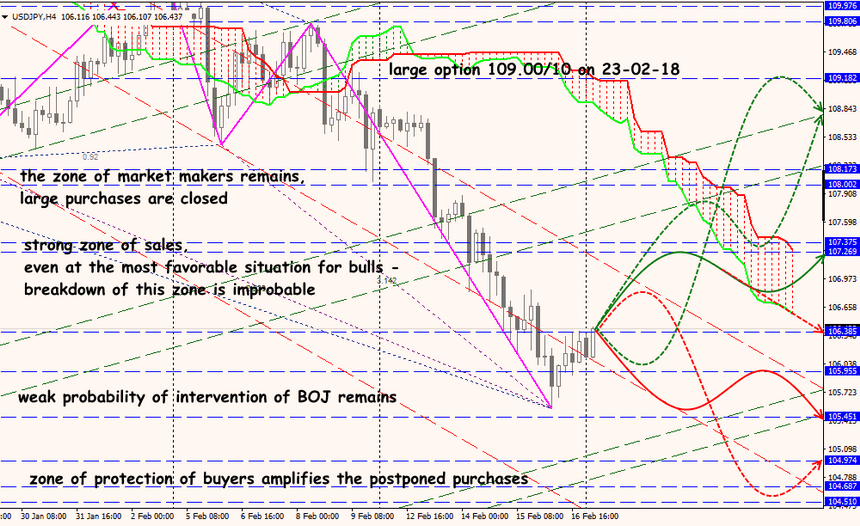