Active fall or as the policy presses on the market

America adopts the budget: Trump looks for the financial colleague; Japan was won by ruling coalition.

Catalonia holds a meeting, and focus of attention is displaced on a meeting of the ECB.

Today the available volume of purchases of state treasury bills of EU countries for 2018 is estimated at €200-270 billion and the main issue is the distribution of this sum on time. The main option − extension of the QE program for €30 billion for 9 months with reinvestments for €15 billion – is already fulfilled by the markets.

Short-term reaction depends on the completeness of information on the policy of the ECB: the volume and duration of euroQE since 1 January 2018 and date of the end.

As always, the devil is in the details: Draghi surely controls market reaction by constant insiders and prefers partial, but consecutive decisions. Criteria of the program have to be announced now, but all disputed issues, most likely, will postpone to December.

Today the main political task of Draghi: to oversee over the debt markets of the Eurozone prior to parliamentary elections in Italy (by hearsay − on March 4, 2018). Till this time he will actively promise loyal policy of the ECB on condition of formation by euro optimists of the working coalition in the Italian parliament. Only at such situation, the ECB will begin to prepare the markets for the closing of the QE program and increase in deposit rates.

The situation in Catalonia passes into the long conflict with meetings and the possible victims. The region doesn't accept the plan of Madrid for the introduction of direct control, and until the Senate approves the decision of the central government (on October 27), is going either to declare officially independence, or Puchdemon will dismiss local parliament. The government of autonomy has called the population to withdraw the deposits from banks which have replaced jurisdiction after the unrecognized referendum on independence. Nevertheless, pressure on euro in anticipation of the ECB is expected insignificant.

The Senate of the USA has adopted the budget of 2018, vote in the House of Representatives on this project is expected a current week. It is the fact it is possible to read out the first serious achievement of Trump from the beginning of its presidential term. In case of ratification of the document, it is necessary to expect a strong positive in favor of growth of dollar. In such case, the bill on tax reform can be presented at the beginning of November that will be coordinated with rates of adoption of the program until the end of the year.

At the moment the favorite in the nomination on a post of the head of FRS is Powell, especially as his candidacy was approved by Mnuchin. Besides, Powell agreed with Yellen on decisions on change of monetary policy and post-crisis financial rules, that is he can quite expect on support from Democrats. However, Republicans headed by the vice-president Pens, insist on Taylor's candidacy, and Trump has begun to read adventurous offers to «cross a grass snake with a hedgehog».

At last, there was positive in news concerning Brexit which, perhaps, became the result of private negotiations of Merkel and May during the summit of leaders of the EU. At least, it is stated that it is impossible to call progress considerable, but the following phase of negotiations can begin in December. On Friday leaders of EU countries recognized that the EU has to prepare for discussion of terms of trade with Great Britain especially as personally Prime Minister never raised a subject of a possibility of an exit from the European Union without an agreement. On this background, the British currency together with the dollar, despite its general strengthening in the light of news from the USA, has managed to rise to offers near 1.3190/00, but it wasn't succeeded to break through above.

The rule «in any unclear situation buy yen» becomes especially relevant. Shinzo Abe has again won: the union of the Liberal Democratic Party and a center-right party of New Komeito has received more than two thirds, that actually minimizes the influence of opposition on decision-making. It means that all reforms started by Prime Minister Abe, including revision of the pacifistic post-war constitution, strengthening of pressure on DPRK and careful rapprochement with Russia will be continued. The main news of an Asian session interested only yen so far, other assets will react within 1-2 days.

In the USA the season of the reporting about profits of the American companies proceeds – nearly 190 companies, which are a part of the S&P 500 index, have to publish results of the financial activity this week. Any negative of the stock market will press for dollar.

The publication GDP of Britain for the 3rd quarter will help to decide on the direction for the next 2-3 weeks. Fans of Asian assets can pay attention to Australian dollar which last week decreased because of the mixed news and statistics. On Wednesday there will be a report on a consumer price index in Australia and AUD/USD has good chances of growth.

There is no important data on China, investors will prepare for Trump's visit, it is expected strengthenings of pressure upon China in the field of commercial relations with DPRK. 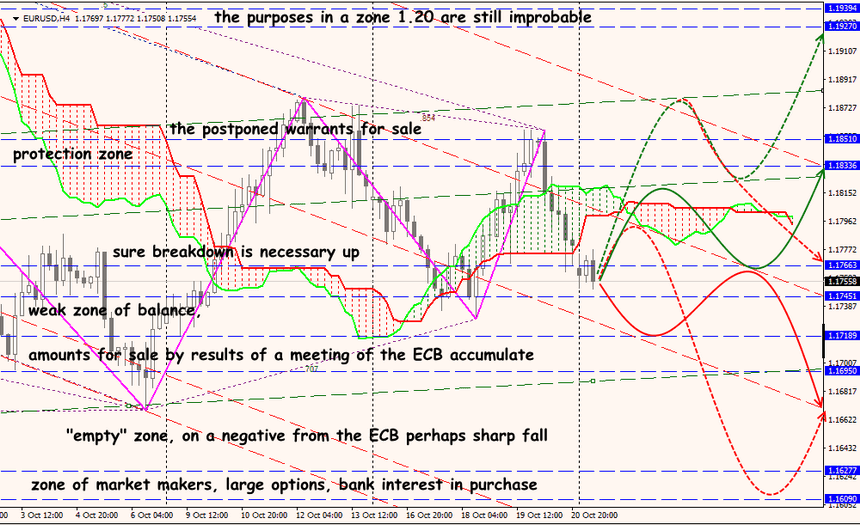 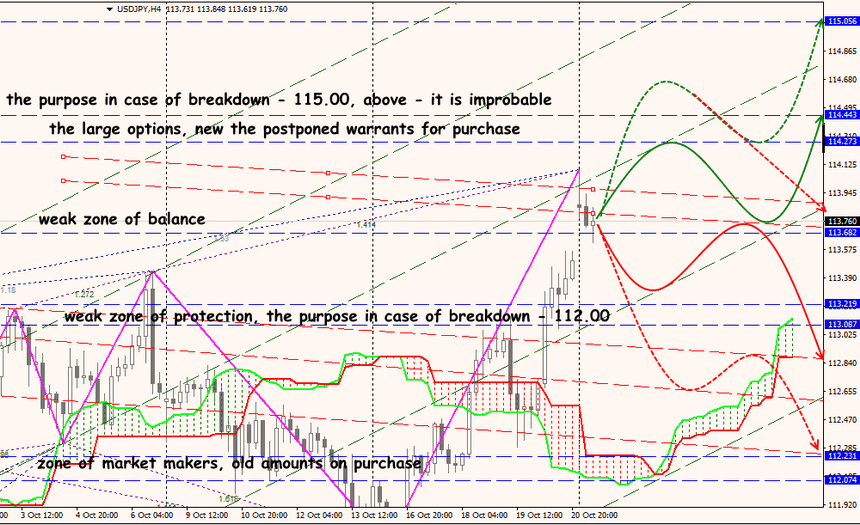