Active bluff as a market factor: we do not trust, but we consider

Britain waits for the prime minister, the EU makes concessions. Draghi prepares a farewell gift. Iran aggravates a situation with oil, but a meeting of the ECB on July 25 and a meeting of FRS on July 31 strongly hold the focus of attention of the markets during the next two weeks.

The final task of Draghi − to start the process of decrease in a deposit rate at least for 0.20% and the new program euroQE with revision of limits on the purchase of state treasury bills of EU countries. Germany already states that the leaving leader exceeds authority, limiting the territory of actions for the new head of the ECB Lagarde, however, Mario never differed in political correctness.

The negative from low interest rates of the ECB exceeds their advantage for a long time, nevertheless, most analysts consider that there is no still obvious need for an increase in incentives. Now for the forecast of actions of the Central Bank, there is not enough information as the most part of problem negotiations of administration of Trump and leaders of the EU happened behind the scenes.

However, the insider from the ECB says that at a meeting on July 25 (with probability more than 50%) will be stated an intention to lower a rate during the September meeting, and the QE program prepares for restart since November. Devaluation of euro for an increase in export can be the only purpose − anyway on the information of the ECB eurodollar will redeem on falling in the run-up to the meeting of FRS on July 31.

The British race for the leader will come to the end tomorrow: doubts that Boris Johnson will become the new prime minister less. All possible negative of problem negotiations of Britain and the EU on Brexit is already considered in the pound price especially as both chambers of parliament could ratify the amendment which does not allow Brexit without agreement without the consent of parliament. The risk of early elections remains, but till October 31 this event is improbable.

Strong statements of Johnson after the appointment can cause the emotional decline of GBP/USD for 1-1.5 figures from the current levels but at the moment Barnier's statements and data on retails reanimated purchases. The EU Commission on Brexit is ready to discuss the alternative plan for the status of the Irish border and nevertheless to reach compromise. We wait for the British assessment of this offer before the end of the week.

The ruling coalition is in the course of disintegration, early parliamentary elections will strengthen the influence of the political forces connected with Salvini. The support by «5 stars» party of Ursula von der Leyen on a post of the head of European Commission was the catalyst, but his high rating and claims for the prime minister's post is the main reason for the aggression of Salvini. The decision will probably be made after consideration of the report on Salvini's bribes from the Russian Federation on July 24. Setting a date of a meeting of Salvini with the president of Italy Mattarella who can oppose calling of an election in 60 days due to the need of adoption of the budget for 2020 will be confirmation of cancellation of the coalition. In the case of early elections, the dynamics of euro will repeat dynamics of Italy parties ratings in the process of approach of date of the vote.

In FRS there came «the silence period» before a meeting on July 31, but last week the head of FRB of New York Williams and the vice president of FRS Clarida actively provoked investors threats of currency intervention on the dollar. Especially as recent comments of Mnuchin on dollar also increase risk of currency intervention. Most likely, Williams's speech intended to a narrow circle of analysts and accidentally got to open air. Nevertheless, the performance of the financial provoker was pleasant to Trump. Attempts of the press center of FRB of New York to soften Williams's statement were unsuccessful: market expectations to decrease in a rate of FRS by 0.50% during the meeting on July 31 sharply fell, the dollar speculatively rose, but generally share assets suffered from it.

Let's remind: not so long ago Great Britain detained in the Strait of Gibraltar Grace 1 supertanker loaded by oil for Syria which formally is under sanctions of the USA. The tanker went a strange route (around Africa) and under the Panama flag, but it did not prevent British to land special troops aboard the vessel, to arrest team and to tow off the tanker.

Iran waited a week and from the second attempt managed to detain in the Strait of Hormuz the Stena Impero tanker under the British flag. It is not possible to come into contact with the crew of the vessel. Alas, the political picture to Tehran is spoiled by the fact that the official owner of the vessel is the Swedish company Stena Bulk, that is the country, (earlier) neutral to Iran, acts as the third party of the conflict. On this background, the USA actively increases military presence in the region. Trump's statement for the readiness of Iran to begin negotiations on the nuclear agreement brought down the quotations of oil, but at the moment negotiation of the USA-Iran is improbable. In the next week information on the conflict will be the main factor for the raw materials market.

Negotiation commands of the USA and China carried out the second round of telephone negotiations, but the date of a personal meeting of leaders is not assigned. The U.S. Department of Commerce will consider today requests of the American companies for sale of products of the Huawei company then dialog can move off dead center that will cause the growth of appetite to risk.

Current week we pay attention to GDP for 2 quarter, trade balance and reports on the sector of the real estate of the USA; PMI of the industry and services in the USA and Eurozone. On Friday there has to be a state-of-the-art review of the ECB. On Thursday evening the insider from the ECB, especially, is not excluded if the reaction of the market to a solution of the Central Bank does not suit Draghi. 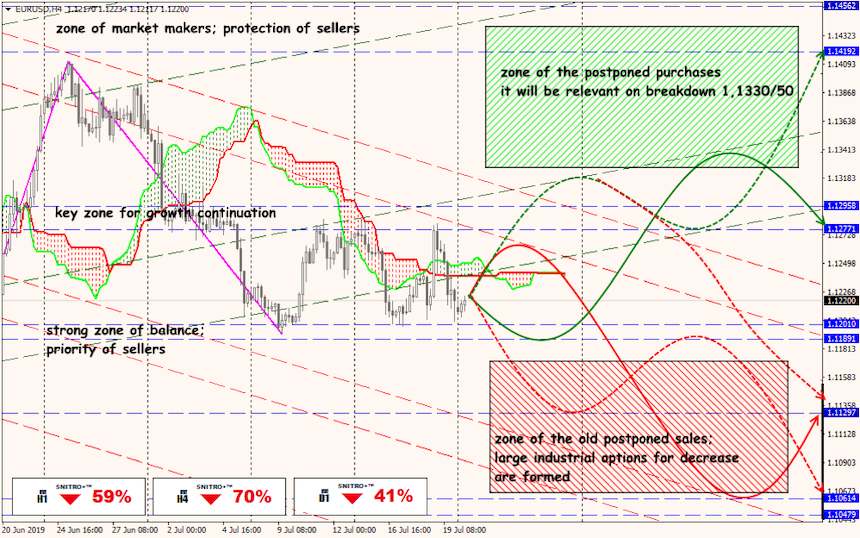 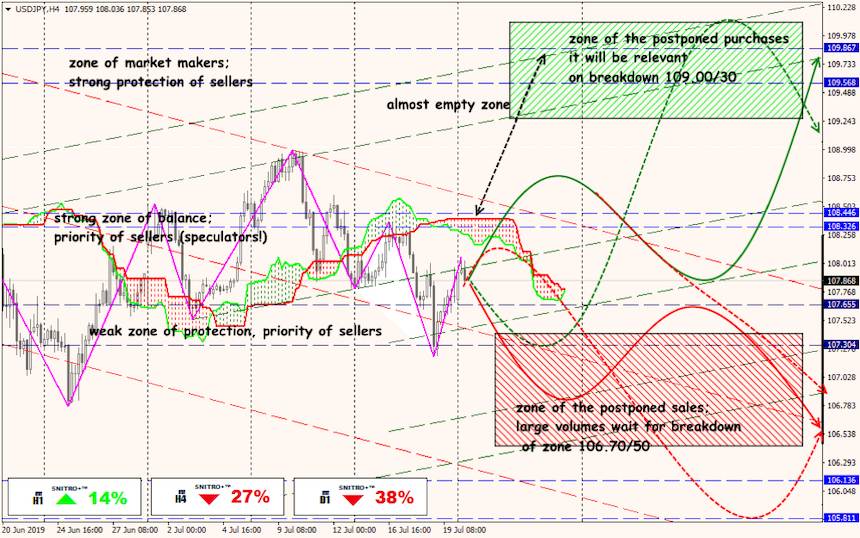